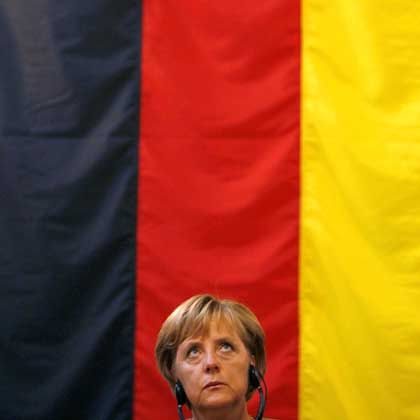 Angela Merkel is staking out her policy agenda for the next two years this week.

German Chancellor Angela Merkel will attempt to lay the foundations for the second half of her four-year termat a cabinet conference on Thursday and Friday in Schloss Meseberg palace 70 kilometers north of Berlin. Leaders of her grand coalition of conservatives and Social Democrats will gather in the baroque palace to agree on a common policy agenda for the period running up to the next general election in 2009.

Policies under discussion include a 30-point plan to cut greenhouse gas emissions, most of which has already been settled in the run-up to the conference.

But media commentators say the Meseberg meeting will do little more than paper over cracks between the two rival parties. Their focus will be less on making policy than on scoring points against each other over the remainder of Merkel's term. They both want to escape the grand coalition straitjacket in 2009.

"The government could pay the people a boom dividend. The coalition could use the surplus of the Federal Labor Agency, which amounts to billions of euros, to lower jobless insurance contributions. That would please businesses, and a few of them may even respond by creating some more jobs. It would also be welcomed by employees who would get back some of the money they paid into the system when the economy was stagnating."

"This has little to do with policy-making, the time of party political tactics started long ago in the grand coalition. That's why no breakthrough for the second-half of the term should be expected in Meseberg -- even if everyone claims there has been one."

"This quasi-coalition won't be undertaking any more big measures."

"Merkel will know how to portray the result of the cabinet conference as a success. She will send out an optimistic signal of revival for the second half of her term, and the coalition parties will give assurances that they want to carry on with each other for a further two years."

But differences remain even in the areas where the two parties have found common ground, such as energy and climate policy, the newspaper writes. "There are limits to the common ground even in these areas because in the end all that counts is who gets credit for the successes and who gets blamed for the failures. New clouds are appearing on the horizon."

Business daily Handelsblatt writes that the government may be taking its climate plans too far:

"Yes, protecting the climate is an urgent task and it will cost money. And it offers great potential -- especially for the German economy. But this mantra, which has been repeated over and over by Environment Minister Sigmar Gabriel in recent weeks and months, only applies up to a certain point. Beyond that, protecting the climate becomes so expensive that it turns into a major burden for the German economy. No one can seriously say whether the figure that is still tolerable for the economy is a 25 percent or 30 percent reduction in carbon emissions. The 40 percent goal looks utopian."

"Even though the package of (climate) measures now presented still isn't capable of meeting the political target, it already goes to the limit of what is tolerable. It affects all areas of everyday life  in part with some drastic means. The proposals themselves aren't bad but they're too rigid in some areas and they risk raising expectations too high. The cabinet conference will offer a chance to make changes."