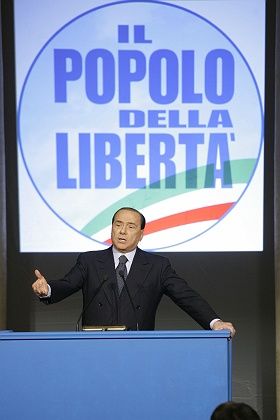 Italian former premier Silvio Berlusconi made a surprise announcement Sunday that he was forming a new party. The move was largely seen as an attempt to reassert his leadership in the conservative camp.

Italian media tycoon, billionaire, former premier and opposition leader Silvio Berlusconi made a surprise announcement Sunday while collecting signatures against current Prime Minister Romano Prodi in a piazza in Milan: He will be forming a new party Dec. 2 that he hopes will be "the protagonist of freedom and democracy for decades."

Berlusconi's announcement comes at a time when he is feeling a lot of heat. He was narrowly defeated by Prodi in the 2006 elections, his recent attempts to torpedo Prodi's 2008 budget in parliament failed and nothing has come of his oft-repeated prediction that Prodi's government was about to fall. As a result, his Forza Italia party's allies on the right have been vocally critical of him and entered into a whispering campaign about the opposition's need for new leadership.

The proposed party also signals Berlusconi's desire to abandon the type of election system that he himself ushered in as premier. Under the current system, parties are grouped together into pre-defined coalitions, which has the effect of creating two solid voting blocs. But squabbling among rivals thrown together into these blocs has proved too much for Berlusconi. Regarding these partners, he said Sunday: "They've driven me crazy. I've always been respectful, patient with everybody and yet  from now on the outlook has completely changed."

Berlusconi has now asked Prodi to draft new election laws that would make Italian politics much more similar to Germany's system of proportional representation. To get Berlusconi's support for amended election laws, however, Prodi would have to call elections for early next year, whereas his current term runs until 2011.

In founding the party, Berlusconi is inviting his partner parties on the right to band together under one banner similar to the way the left did earlier this year when it formed the umbrella Democratic Party, headed by Rome's Mayor Walter Veltroni.

But, while his old party, Forza Italia, will fold into the new one, none of other parties on the right -- particularly the Northern League, the National Alliance (AN) and the Christian Democratic UDC -- have yet to show any interest in joining Berlusconi's proposed party. Gianfranco Fini, the popular head of the center-right AN, for example, told Canale 5 TV: "AN will never dissolve, never merge; we're not even thinking about it."

Italian critics have voiced the opinion that Berlusconi's new party is a maneuver for him to reassert his leadership position and weather the storm of criticism. Since his partners on the right need his cooperation to form a majority, too, it could also be a move that forces his critics to fall in line. As the Corriere della Seraput it, Berlusconi's announcement amounts to his telling his allies: "Either with me or against me."

As Walter Valtroni sees it: "Berlusconi's move is the recognition of defeat (because) he didn't manage to fell the government." This is an opinion with which most German commentators seem to agree:

"In announcing the founding of his new 'People's Freedom Party,' Silvio Berlusconi is hoping to free himself from the distress his political braggadocio has caused him .Founding the party is a desperate maneuver aimed at retaining supremacy in the political right, which is threatening to slip out of his control. And that is the only reason that he is now showing himself as being open to the possibility of reforming electoral laws, which all the other parties have been calling for."

"The 'People's Freedom Party' -- which has yet to bring into its fold any of the other groups on the right -- is nothing other than the newest incarnation of Forza Italia, the party Berlusconi founded 14 years ago. The newly minted People's Party doesnt have a chance of becoming the new rallying point for the right in the same way that Walter Veltroni's Democratic Party is for the left-wing spectrum. It should really be outfitted with a few young politicians, but a fresh core doesn't have a chance as long as Berlusconi retains his central position."

"Silvio Berlusconi has once again announced the founding of a 'party of the center right,' this time for December. There is a certain logic to this act, seeing that 'Forza Italia' -- an entity that he has used to support his corporate power -- is merely a movement whose backbone is made up of from people employed in Berlusconi's corporate empire"

"Whether Berlusconi's attempt can succeed is another matter. His former coalition partners have already said 'thanks, but no thanks.' As long as Italy's election laws continue to give even small parties the chance to have a place in parliament -- which turns the process of forming governments into a series of blackmailing maneuvers that result in political crises -- the various party condottieri -- on both the left and the right -- will refuse to allow their influence to be reduced. Why should it be any better for Berlusconi than it is for Prodi?"

"It looks like Berlusconi's authority as leader of the right in Italy is ebbing. His failed coup against the government has made it clear for all to see that, in the 18 months since he lost power, the center-right coalition has failed to accomplish anything that would offer citizens an alternative to the ruling center-left government. Not even once was an honest analysis of the (center-right's) election defeat made, and the former premier was able to posit his theory of electoral fraud for far too long."

"Berlusconi's attempt to hastily found a new party, which will unite all the forces of his old coalition, leaves the impression of being a poorly thought-out attempt to seize the initiative. Berlusconi failed to accomplish a process of unification. In a sign of just how much the right has fragmented under his influence, a proto-fascist party was recently founded that hails Berlusconi as the 'Duce' (Mussolini's moniker). All the other parties in the former coalition have declined to join in this 'People's Freedom Party.' Berlusconi has his wealth and his media power to thank for the fact that he still does have some influence. But the future leadership of the conservatives is pining for a politician with a plan."