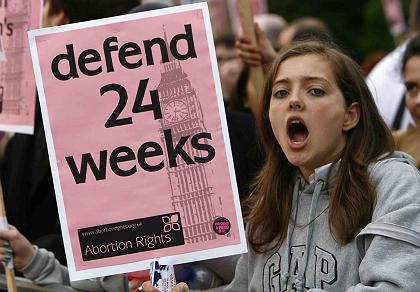 A pro-choice campaigner shouts during protests outside the Houses of Parliament in London while Britain's parliament voted on proposals to reduce the time limit for abortion from 24 weeks.

Over the last few days, Britain's House of Commons has been the focal point of a raging and complicated scientific debate that stirs up passions, fears and hopes on all sides of the political divide. In a series of votes, the parliament has forced the nation -- and the world -- to think hard about where scientific advances have taken and might still take us.

The votes on Monday and Tuesday touched upon a large number of massively important and controversial issues. The biggest one, perhaps, concerns the Human Fertilisation and Embryology Bill, which aims to bring laws passed in 1990 up-to-date with both the current state of scientific advances and current social attitudes.

In a 336 to 176 vote on Monday, an attempt to ban research using hybrid human-animal embryos was defeated. Scientists claim that such permission is necessary for them to continue looking for cures for diseases such as Parkinson's and multiple sclerosis, and that a shortage of donated human embryos forces them to look elsewhere.

Opponents from some religious and political camps, however, worry that permitting such procedures is not only unethical but also bound to fail. Lawmakers tried to dampen such fears by forbidding scientists from allowing hybrid embryos to develop for longer than 14 days and from being implanted in an animal or human for further development.

The issue of "savior siblings" concerns cases in which parents attempt to screen embryos and thereby "select" a child with specific characteristics so that that child might be able to help an older sibling suffering from a disease, for example, by donating tissue, bone marrow or an organ. Despite intense opposition, lawmakers authorized this type of screening by a 179-vote majority late Monday.

On Tuesday, lawmakers abolished the earlier legislation's requirement that a father be present in order for a woman to seek fertility treatment. This vote is seen as a move to make such treatment more readily available to lesbian couples and single women.

Although the bill did not include any specific proposals to change Britain's abortion laws, a number of anti-abortion MPs submitted amendments proposing various reduction of the current 24-week limit for having an abortion to as early as 12 weeks. In a vote Tuesday, lawmakers voted to maintain the current limit.

Predictably with such sensitive issues, the debate was heated and involved flying accusations between Prime Minister Gordon Brown and scientists, on one side, and religious leaders, anti-abortion activists and numerous lawmakers on the other.

The debate touched upon the age-old battle between ethics and science, and the fear that scientific curiosity or malfeasance might lead to ethical abuses or worse. For example, Human Genetics Alert, a science watchdog group, told the Associated Press: "Once we start down the road to human genetic modification, it will be very difficult to turn back."

Naturally, German commentators were split in their opinions about the British decisions, and their opinions ranged between abject horror and qualified praise:

"One can see a society's moral standards in the way it treats its weakest members. This British regulation will carelessly compromise this ethical understanding. Moreover, even now, the medical use of embryonic hybrids has not being given free reign. Even if it were, the moral price would be too high."

"The outrage and the unease about the scientists' recent breaking of taboos are greater than the threat emanating from their unusual creatures. Science is much more threatened by the perception of it held by the public, which hasn't been able to understand for a long time which experimental and ethical hurdles have already been surmounted or circumvented."

"The British MPs held a very profound debate about this issue. From it, you could gather that even the bill's advocates were conscious of crossing a Rubicon. One sign for the high level of the debate was the fact that the MPs did not allow themselves to be influenced or misled by catch phrases, such as 'Frankenstein science.' Nothing can be had in life without responsible risk. That is also -- and particularly -- valid when it comes to ethical issues that you can't 'solve' by sweeping them under the rug. Following the path of least resistance -- i.e., doing nothing -- doesn't make us more moral.

"What really led a majority of MPs in the House of Commons to expand stem cell research into what has until now been the unimaginable is an undying faith in the omnipotence of scienceEven if it might sound a bit excessive to label Britain henceforth as a land of rogue scientists, they may only be disappointed in their often desperate hope for medical marvels, for the ability to cure terrifying diseases. The House is following a misguided path."

"With this vote, the British have taken a brave step forward  The only issue that is really delicate is that -- theoretically -- every characteristic can now be selected, and we are one step closer to designer babies."

"While the German parliament continues to agonize over the attempt to gain access to the research without having to get their hands dirty, the British face the ethical issues head-on and without blinking."

"All technical revolutions have shifted our standards. In the early stages, even the steam engine, immunization, in vitro fertilization and the computer faced strong opposition. But traditional standards aren't always enough. Welcome to the century of the life sciences."