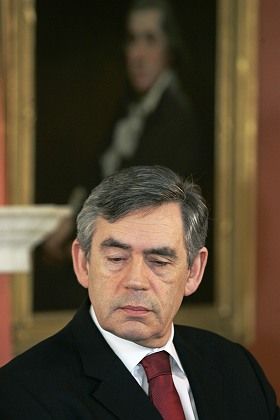 It was a disastrous night for Britain's Labour Party and especially for its leader Gordon Brown: In Thursday's local elections the ruling Labour Party suffered its worst result for 40 years, winning only 25 percent of votes.

For Brown, who took over from Tony Blair only 10 months ago, the election defeat is one many political analysts think the prime minister and his party cannot recover from.

The opposition Conservative Party made strong gains across the whole country, beating Labour even in its strong holds in parts of the north. The Conservatives also wrested the coveted London mayoral position from Labour, which the eccentric Boris Johnson won.

British newspaper commentators spoke of a "blood bath for Labour" and a "massacre." Media commentators in Germany lay the election defeat squarely at Brown's feet, pointing in particular to his economic policies as chancellor.

"Last fally, boosted by a short grace period Brown, who was seen as a modest, serious anti-Blair, considered holding an early election under the slogan 'Not flash, just Gordon.' But after the Conservatives ... improved their standing in the polls, he drew back, and then did not have the courage to admit he did so out of caution."

"The British do not like that kind of behavior. They like people who -- when it gets tough -- demonstrate courage and succeed. People who hesitate have a tough time on the island, where the stiff upper lip resistance to Hitler is seen as the nation's 'finest hour'."

"New center -- the broad coalition of the working class and liberal middle class -- which over a decade ago swept Labour to power has fallen apart."

"The new center would probably have fallen apart in Great Britain -- a victim of rising prices and falling expectations. Maybe this coalition can only work in good times -- and not only in the UK. It is no coincidence that its most prominent protagonists in Germany and the US fell out of favor even before Blair did: Gerhard Schröder sells pipelines for the Kremlin and Bill Clinton ... is kept under house arrest to ensure he does not cause Hillary any more embarrassment."

"With hidden taxes he took with one hand and gave with the other through tax credits and other special programs. This micro-management of the national well-being was a success, as long as there was money to pay for it.

"Now, in the midst of crisis, the unforeseen consequences of this complexity have caught up with him. Companies are threatening to move abroad, because they are fed up with ever more complex taxes. And Labour's core supporters are rebelling against the abolishment of a low tax rate, which Brown himself introduced a few years ago."

"Once Britain had a simple tax system, light regulation and a slim state. Brown's micro-management has turned these into a bureaucratic apparatus, which creates a new problem every time it tries to solve one."

"Brown is being underminied by mishaps in economic policy of all things. For a long time, he observed rather than tackled the credit crisis, which spread from the US to the UK. And the abolition of the lowest tax rate for workers on the minimum wage is -- for a prime minister of a workers' party -- political suicide. Since then Brown is seen as lacking empathy and leadership qualities."

"However, that does not explain the extent of the election defeat. Aside from the fact that social-democratic governments are currently in decline in several other countries -- in Italy and in France -- the British have their own national political peculiarities. They tend to, more than others, assign personal blame to the prime minister for various miseries."

"And so the island nation, which in its splendid isolation still thinks of itself as largely independent of the EU, holds the prime minister responsible for even global developments."