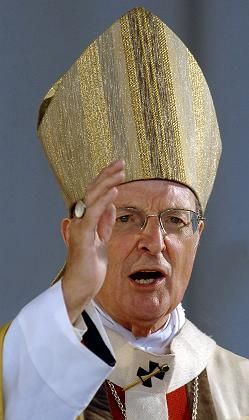 The Cardinal of Cologne, Joachim Meisner, is well-known for provoking controversy.

German Cardinal Joachim Meisner has caused an uproar in Germany by using a Nazi term in a speech. The 73-year-old Roman Catholic cleric said modern art was at risk of 'degenerating' -- a word associated with the Nazis who labelled art as 'degenerate' if it didn't reflect Hitler's racist ideology.

Meisner, speaking at the inauguration of a museum in Cologne on Friday, criticized art that doesn't worship religion. He said: "When culture is disconnected from divine reverence, the cult descends into ritualism and culture degenerates. It loses its center."

The comment provoked a storm of criticism. Culture Minister Bernd Neumann called it totally unacceptable. The head of the opposition Greens, Claudia Roth, called on Meisner to step down. "In my opinion he can no longer be accepted as a Cardinal," she said. The Central Council of Jews in Germany called Meisner a "spiritual arsonist" whose comments risked fanning support for neo-Nazis.

German media commentators have weighed in by saying that even ignoring his use of the word 'degenerate', Meisner's statement that art must worship God reflects a medieval and fundamentalist view of the world which the Taliban would have no trouble agreeing with.

"Doesn't the man sitting on Germany's most important bishop's throne realize what he's doing with his crude comparions which all somehow seem to end up in the Nazi era?"

"Even without the word 'degenerate' the cardinal's thesis that art is only art if it serves the worship of God is unacceptable. Yes, western European culture wouldn't be feasible without Christendom, and the Christian faith would be a dry affair without the expressive power of art."

"But art can't be limited to religion, and it thrives on breaking rules, even church rules."

"Art as servant of the church -- Cardinal Meisner is betraying a medieval understanding of art and a sad perception of the world. It is narrow and frightened and limited"

"One has to ask oneself what got into Cologne Cardinal Meisner to make him go public with such a gross provocation as to refer to 'degenerate' culture in a sermon. The National Socialists used the term degeneration to attack art and nothing will separate the word from its association with murder, persecution and destruction. Whatever Meisner wanted to say, he shouldn't have used that word to say it."

"Is Meisner trying to say that all wordly art is misguided? Does he think art is shallow and spreads a distorted image of man if it doesn't expressly refer to Christian doctrine? The Cardinal seems to be confusing religion with ideology. If he lectured the public while being ignorant of the facts, he was impudent. If he just wanted to be provocative, he displayed a lack of restraint and of decency. Both breach the requirement of modesty that a religious man in particular should adhere to."

"It's not about a bad word. Meisner's sermon is an expression of religious fundamentalism."

"The uproar is justified. The Nazis labelled art as 'degenerate' if it wasn't founded on the notion of ethnic nationalism; such forms of art were individualistic, destructive and decadent -- that was the thinking between 1933 and 1945. Cologne Cardinal Joachim Meisner has now simply switched out the reference point with his misguided update of the term 'degenerate.'"

"If one took his sermon seriously just for a second one could immediately detect that it had nothing to do with the notion of a modern and liberal society. So it doesn't help if Cardinal Meisner complains about the 'misinterpretation of a single word.' The whole spirit of his sermon exuded religious fundamentalism. Meisner said that art must worship God to be true art. A member of the Taliban wouldn't put it any differently."

Conservative Die Welt writes that Meisner made a "cardinal error:" "The most recent comments of Cardinal Meisner aren't of any use even if one discounts his reference to the word 'degenerate.'"