It has been a very long week for German Chancellor Angela Merkel's conservatives. In addition to leading the planned bailout of Greece, the party has had to deal with the fallout from a state-level ministerial appointment that was meant to promote a more cosmopolitan image of her party.

Last Monday, Merkel's ruling Christian Democratic Union (CDU) was basking in self-approval after announcing that the northern state of Lower Saxony had appointed the daughter of Turkish immigrants to become its minister of social affairs -- the first immigrant ever appointed to a state cabinet. But, since then, the decision has triggered a massive uproar within the party itself.

Comments Aygül Özkan made in a interview published on Thursday in the newsweekly Focus spawned the commotion. There, the minister-to-be said that "Christian symbols" -- or, more specifically, crucifixes -- "do not belong in state-run schools" in the same way, she added, that Muslim headscarves don't.

Criticism of these comments was immediate and widespread within the CDU and its Bavarian sister party, the Christian Social Union (CSU). Christian Wulff, the state's governor, who had chosen Özden for the spot himself, distanced himself from her, saying that "the state government welcomes Christian symbols -- and crucifixes in schools, in particular -- as part of a tolerant education based on Christian values." Leading Bavarian CSU politician Stefan Müller said Özkan should contemplate whether a party with Christian roots is really the right place for her. A spokesman for Merkel said that she considers having crucifixes in the classroom part of a long Christian tradition. And a chorus of other Christian politicians and organizations has demanded that the appointment be cancelled.

On Monday, a day before she is supposed to be sworn into office, Özkan tried to combat the fire by distancing herself from her own comments and apologizing to her party colleagues for any irritation she might have caused. Lower Saxony Governor Wulff stepped in to help smooth things over, too, stating that: "Özkan accepts that crucifixes are welcomed and desired in the schools of Lower Saxony. She is with us on this point. So the matter has been settled." And, on Tuesday, Armin Laschet, the integration minister of North Rhine-Westphalia and CDU member, worked to tone down the voices of outrage, telling Deutschlandfunk radio that, though he found the criticism justified, he also found it "excessive" and calls for her to not assume the position "exaggerated."

In Tuesday's newspapers, German commentators almost universally chastise the conservatives for making themselves look even worse with their shrill reactions and, as some have it, for being just plain wrong.

"Özkan is a lawyer by profession. Maybe she believed she was standing on the solid foundation of the constitution paved by Germany's highest court. Maybe she believed she wasn't saying anything different from what the Federal Constitutional Court said 15 years ago in its crucifix decision. At that time, the country's highest-ranking jurists declared that the state cannot make it mandatory to have a crucifix in a classroom. But Özkan cannot invoke the court's decision because she wanted much more. She wanted to make it mandatory to have crucifixes removed from schools."

"When the court made its decision 15 years ago, the CDU and CSU massively protested against it and misrepresented it in public to make it seem like it meant exactly what the new minister is calling for today. ... As a result, most Germans were of the opinion that the court had 'taken a hatchet to an important symbol of (German) culture and heritage.'"

"At that time, the court's crucifix decision caused a political earthquake. And, now, the new minister has caused a tremblor within her party. As a result, now we have her standing next to Governor Wulff to quickly announce that she 'didn't mean it that way.' In the future, she'll be a bit more careful."

"Özkan can now be used as instructional material in political textbooks. The flap that she has caused ... is a good example of how a push by a party that is in and of itself correct can turn into a flop in terms of electoral tactics."

"Özkan had only formulated a general principal and in no way called for a concrete ban. She is also not actively pushing the issue but, instead, simply answered a question in an interview, where she put having crucifixes in schools on the same level as having Muslim headscarves."

"The problem for Özkan and the CDU is something else entirely. As sad as it is, the Christian Democrats can only lose by having an integration minister like Özkan."

"Wulff may have been hoping that appointing a Muslim woman to a top ministerial position would help the CDU tap new reservoirs of voters. ... But this calculation can only work if the chosen minister doesn't have what she is meant to embody to outside viewers, namely, cosmopolitanism, courage and a mind of her own. Otherwise, the things she says will annoy both loyal voters and conservative Muslims."

"All of the bigwigs in the CDU, from Wulff to (Merkel), have distanced themselves from Özkan. Even if not all of them are urging her to leave the party or familiarize herself with the party's platform, having this kind of united front is still a political dressing-down. The fact that the minister who was meant to be a shining example considered it necessary to apologize for her comments strips her of any kind of authority even before she enters into office."

"We can wish for more politicians like Özkan. But, when we see the way the Christian Democrats reacted to Özkan's statements, we can't expect much from those who follow in her wake."

"Özkan's belief that crucifixes ... don't belong in public schools obviously goes directly against what the majority of the people in her party think. So it's no surprise that she has brought upon herself the harsh criticism of the CSU and people in conservative Christian circles, some of whom are even calling for her to not assume the office she's been appointed to. It's also not a pleasant sight to see how the leaders in her party ... have distanced themselves from the newcomer. The reason, of course, is that Özkan's rather casual comments have triggered an overdue debate about state neutrality toward religion -- and shown courage to confront popular opinion."

"This also shows just how courageous it was for Wulff to appoint a Muslim to his cabinet. The initial reactions of some conservatives -- which ranged from open disapproval of what was meant to be purely a PR coup to the insinuation that (she) is not qualified to hold this office -- show just how far Germany is from a situation where such an appointment would be taken for granted. After her candid words about the crucifix, some of the reservations about Özkan have turned into open hostility, and she has even received death threats from right-wing extremists."

"If a German politician charges that human rights are being violated in Germany and -- as the first Muslim woman appointed to a ministerial position in a German state -- reminds the federal government of its obligation to maintain a neutral stance toward religious issues, and if, in doing so, the politician can cite verbatim decisions made not only by the European Court of Human Rights, but also by Germany's Federal Constitutional Court, it would appear that the real scandal is not the human rights violation that has been charged but, rather, the act of making the charge itself."

"Granted, it may be that Aygül Özkan wasn't toeing the party line when she made her comments. But there's no doubt that they didn't adhere to the spirit of Germany's constitution. The lawyer with Turkish roots has understood the meaning and goals of the principle of state neutrality (toward religion) better than all of her critics put together. The principle does not hold that the state must maintain a neutral stance toward all religions -- as long as it gives preference to the Christian ones. Rather, it holds that the state must maintain equidistance to all religions. The German state based on the constitution of 1949 is not a Christian state. Whoever understands it to be otherwise has not understood the German state and, even less so, its constitution."

"The calls within the Union to cancel Özkan's appointment are becoming loud. If that happens, she should sue it before the European Court of Human Rights. And the grounds for her suit should be that she was discriminated against for defending the constitution's principle of state neutrality."

"The CDU wants to embellish itself with Özkan, and it has clearly enjoyed the praise it garnered for appointing her. But the fact that its poster immigrant has her own opinion is much too much for it to handle."

"Granted, it would have been a bit much to expect a Muslim in the Union to promote Christian symbols. But instead of viewing Özkan's stance as one among many in a party that has grown to become very heterogeneous, politicians in the Union reacted in an uptight and inflexible way -- fearing, of course, the reaction of conservative Christian voters."

"In doing so, Wulff & Co. have shown their hand: They only wanted pretty pictures and pleasant headlines."

"The Union needs to make a decision. If it seriously wants to welcome immigrants into the party, it has to be able to deal with a little fighting within the party -- even when it has to do with the crucifix. Otherwise  it's all just for show." 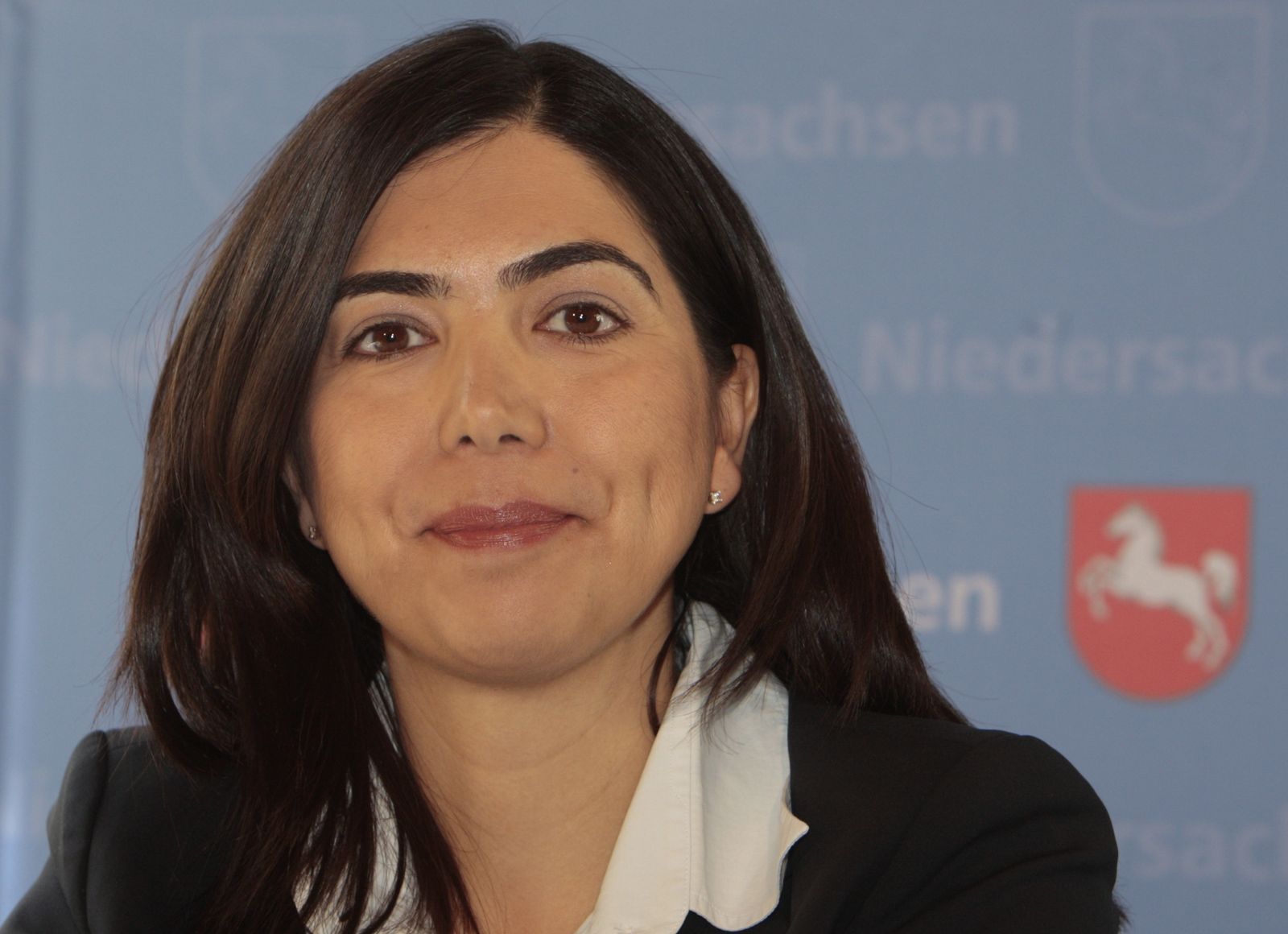 Aygül Özkan ignited a firestorm in her Christian conservative party when she suggested that crucifixes shouldn't be allowed in state-run schools.