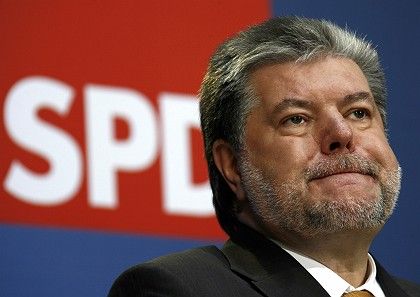 Relations between the conservatives and center-left Social Democrats in Chancellor Angela Merkel's ruling coalition have been deteriorating for months. Now the leader of the SPD, Kurt Beck, has shoved a thick wedge in the crack between the two partners in the form of an essay published Monday in the prestigious German newspaper the Frankfurter Allgemeine Zeitung.

The essay, which took up an entire page in the newspaper, was entitled "The Social Germany" and set out Beck's ideas about social security, freedom and equality. However, the message which most readers took away with them was Beck's dismissive characterization of the Union, as Merkel's Christian Democratic Union (CDU) and their smaller Bavarian sister party the Christian Social Union (CSU) are collectively known, as being "neo-liberal" -- something of an insult in German left-wing circles -- and his accusations that they put the market before social welfare.

Another section which is likely to be remembered is an introductory sentence -- which may well backfire on Beck -- where he writes: "People have a keen sense of what is important and who is only trying to make him- or herself look important."

Predictably, conservative politicians have been quick to criticize the essay. Roland Koch, the premier of Hesse state, described the essay as an act of helplessness and an attempt on Beck's part to keep his party together. Fellow CDU politician Wolfgang Bosbach said that when the SPD "plays the social card" it helps the far-left Left Party most of all: "The Left Party can sing the old songs better."

Observers have suggested that Beck's essay is partly intended to stop SPD voters from drifting to the Left Party, the increasingly popular successor to East Germany's communist party.

The essay is the latest development in an ongoing spat between the coalition partners. Germany's grand coalition of left and right was formed after hung elections in November 2005, and there has always been tension between the two partners, who are traditionally political enemies. The coalition has been criticized for not making progress on key issues such as healthcare reform, and Chancellor Angela Merkel's successes on the international stage, such as at the G-8 summit last week in Heiligendamm, contrast sharply with the stalemate in German domestic politics.

Further strife is expected next week, when the coalition discusses the issue of a minimum wage. The SPD is pushing for a minimum wage to be introduced in Germany, but the two sides are far apart on the issue and there seems little chance of a compromise being reached.

Commentators in Germany's main newspapers Tuesday were on the whole critical of Beck's essay, with some skeptics suggesting that Beck was just trying to raise his profile and get out of Merkel's shadow.

"Beck's motive is very simple to understand. He wants to say: 'Hello! I'm still here too!' ... Beck is once again looking for a fight more than anything else. The only question is whether anyone is interested. People certainly have a keen sense for the fact that the attack resembles a form of defense that says more about the SPD's crises than it does about the evil CDU."

"And Kurt Beck has harmed himself most of all with his attacks on the CDU. Because actually the SPD head has never described social challenges and possible ideas for their solution as well as he did in his new essay -- after the polemic come completely plausible arguments. What people will remember of his essay will, however, be mainly the accusations of neo-liberalism that he made against the CDU."

"Kurt Beck's attack is full of a tragic powerlessness. That comes partly from the fact that he is once more playing -- against his better judgment -- Germany's old 'left versus right' political games, with the CDU seen as the party of a baseless, deeply asocial 'neo-liberalism.' What kind of person expects to gain from such an approach?"

"It is a crying shame that the SPD with its proud tradition again and again portrays freedom as lack of responsibility whenever it finds itself in a difficult situation. The SPD is lacking in boldness in formulating goals which are worth implementing. In the long term, however, the social-democratic clientele will not find it very amusing to be portrayed in the party discourse almost exclusively as helpless wards of the state who cannot fend for themselves. If they do not believe their supporters are capable of greater things, they will sooner or later lose them."

"The Union is neo-liberal? I have rarely laughed so hard. The Union is not at all neo-liberal, and if it ever was, then it was back in the 1960s, when Ludwig Erhard was chancellor. Since then it has mutated into a social-democratic force ... in which now and again the occasional liberal intellect raises his voice, without any effect. Kurt Beck, who castigated the alleged neo-liberalism of the Union in this newspaper, has the wrong image of his enemy."

"At the end of the day, the attacks on the alleged neo-liberalism of the Union show one thing: the SPD's poverty of ideas. Under (former chancellor) Gerhard Schröder, the party had followed a temporary and cautious approximation of the hated neo-liberalism. But nowadays it no longer knows what exactly it is supposed to stand for. Beck seems to have come to the conclusion that little is to be gained for the SPD in the center. Therefore he uses the language of his former party friend (prominent Left Party politician) Oskar Lafontaine, in order to re-position the SPD as a party of the left. What kind of useful political and economic ideas he will find there remain a mystery."

"Securing the status quo is the only issue that appeals to Social Democratic hearts. It is the topic with which Kurt Beck wants to attract voters. However the flip side of the promised social security is often protectionism and privilege ... If the price for a worry-free life in a legally protected core of state and business is putting any outside competitor at a disadvantage, then this is a very unusual form of equality and solidarity."