Pope Benedict XVI landed in Berlin on Thursday morning about fifteen minutes ahead of schedule, but the city was ready for him. A 21-gun salute fired into the air as he stepped out of the plane, and protesters around the capital gathered for demonstrations in front of the Brandenburg Gate as well as the German parliament building, the Bundestag. Benedict was scheduled to speak before the Bundestag in the afternoon, but around a hundred legislators will not sit and listen to him -- choosing instead to stand outside with the protesters.

It's a difficult homecoming for the German-born pope, who felt compelled to acknowledge the planned protests to journalists on the plane from Rome. Protest is "normal in a free society and in the secularized world," he said. "I can understand that some people have been scandalized by the crimes that have been revealed in recent times," a reference to abuse scandals that have tarnished the Church in diosceses from Australia and America to Europe. But, he said, "I was born in Germany. Such roots cannot be severed, nor should they be."

From Berlin the pontiff planned to travel on to Erfurt and Eichsfeld in the eastern state of Thüringia, then to Freiburg in the south. He'll return to the Vatican on Sunday.

He's visited Germany before, but commentators on Thursday morning treat the four-day return of a powerful native son as a sort of cultural inkblot test, questioning the meaning of the visit for their country.

The left-wing Berliner Zeitung, in a signed student editorial, writes:

"'Dear God, let's get it over with.' Such prayers can be heard all over Berlin this week. The Holy Father hadn't even arrived before young Berliners were already sick and tired of him. Cheering Catholics and Vatican riffraff have been on TV and in our faces for weeks, but many of my generation are just onlookers in this irritating posse for the Pope."

"At a World Youth Day in Madrid, Benedict spoke to a disillusioned younger generation whose future had been buried under the recent banking scandals. His solution: Trust in God. But the people who supposedly have the answers are the same people who consistently go wrong, in the minds of many (younger Europeans). This is the basic problem."

"The German theology professor Joseph Ratzinger, as Pope Benedict XVI, will pay a visit not only to his Catholic brethren in southern Germany (Freiburg), but also to Thüringia, a heartland of Protestantism, and to Berlin -- certainly not a heartland of Christianity at all."

"(In the Bundestag) Benedict will mention the financial crisis and the world's dangerous lust for money … In official texts both Protestant and Catholic authors express clear support for entrepreneurship and dynamic economic development. The Catholic text emphasizes the value of individual freedom -- something that isn't at all clear from the Church's social teachings."

"(But) both churches also support regulation and 'countervailing powers' that can steer unbridled capitalism into productive channels ... Even if we don't require tutoring, we can look forward to Benedict's speech in the Bundestag."

"A heartfelt welcome for Benedict XVI is in order, not only because he's a persistent preacher against war and injustice. That's one reason respect -- but another is simple solidarity with the 24 million Catholics in Germany. Their basic right to religious freedom includes a right to goodwill when they publicly celebrate the pope."

"Protestant leaders have been invited to respectful discussions in Erfurt, where the pope will visit historical sites related to Martin Luther. … The two churches will reinvigorate a culture of theological debate that will only do the nation good."

"It's true the Catholic Church maintains the position that homosexuality is not quite the most fulfilling of sexual appetites … But critics who boil Catholic sexual morality down to this question -- or to the question of contraception methods -- miss the essential point, which is simply greater fulfillment in mutual love, respect and honor, and the dissemination of these qualities through an openness to a new spiritual life."

"Many people regard the Catholic Church no differently than the some 100 parliamentarians who plan to boycott the pope's speech in the Bundestag this Thursday: They believe it is below their station to simply listen to what the pope has to say."

"Imagine what would happen if the Catholic Church and its representatives were no longer regarded as the authors of the world's evil, and no longer served as a projection-screen for the most absurd suspicions? The world might lose its final prejudice." 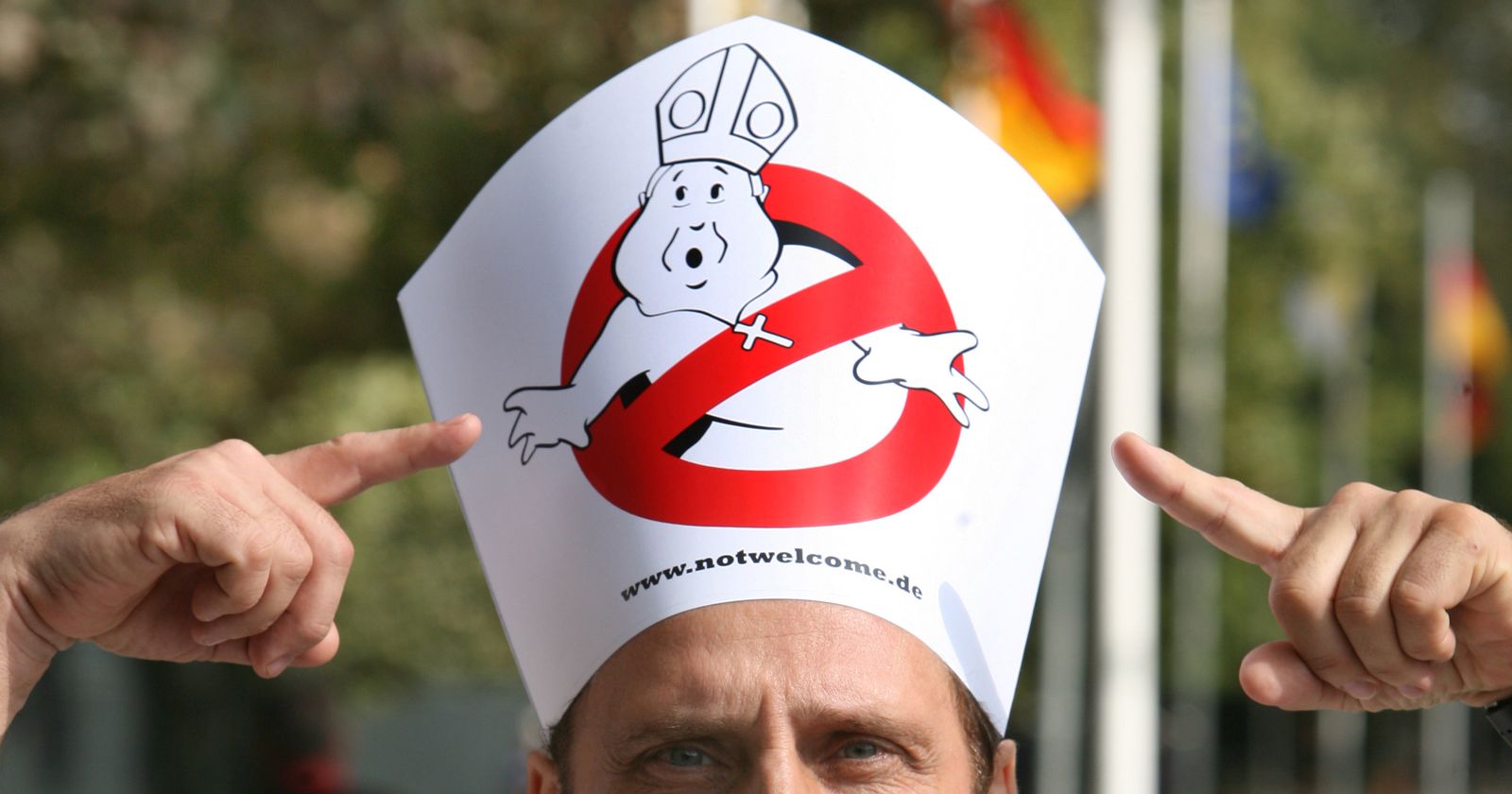 A pope protester awaits the pontiff's arrival on Thursday.