Thousands of people took to the streets of Minsk on Sunday to protest the disputed re-election of Belarusian President Alexander Lukashenko, whose official vote tally was almost 80 percent. Hundreds were arrested, beaten, or both -- including seven of nine opposition candidates. The Western outrcry has been loud but feckless, the Russian response purse-lipped ("an internal matter," said President Dmitry Medvedev) -- and Lukashenko is unrepentant. On Tuesday a Belarusian court issued blanket 15-day jail sentences to over 600 protestors arrested by police on Sunday. They face up to 15 years in prison, should they be convicted of inciting violence.

It was an implicit snub to the European Union, which had made overtures to Belarus ahead of the election and afterwards demanded freedom for the candidates and journalists. "The German government calls for the immediate release of arrested opposition politicians and media representatives," said German Chancellor Angela Merkel's spokesman Steffen Seibert on Sunday.

There has been little progress toward democratic reform during President Aleksander Lukashenko's 16 years in office. Former US Secretary of State Condoleezza Rice famously called him "Europe's last dictator," and the nickname stuck. His close relationship with Moscow -- like Belarus' state-run economy -- depends on cheap oil and gas.

German Foreign Minister Guido Westerwelle paid a high-profile visit to Minsk in November with his Polish counterpart, Radoslaw Sikorski, to offer €3.5 billion ($4.6 billion) in EU aid as a carrot for "free and fair" elections this month. They also dangled promises of looser borders with Europe and more Western business investment. These elections, Westerwelle said in November, would be a "litmus test for democracy."

Now the results are in, and the two foreign ministers issued a joint statement saying the elections were not free or fair according to criteria set down by the Organization for Security and Cooperation in Europe (OCSE), which observed the process. "This is a severe setback for the democratic ambitions of the Belarusian people," Westerwelle and Sikorski wrote. "Together with our European colleagues, we will determine the consequences of the latest developments in Minsk for our future policy towards Belarus."

Lukashenko, for his part, remained unmoved on Monday. He said he would thwart any attempt at "revolution" and that he would allow no more "senseless democracy" in Belarus.

"No one can be surprised to see evidence of massive fraud -- again -- in a Belarusian presidential election. But the utterly brutal behavior of the regime toward its critics was unexpected. The dictator's henchmen sent not just opposition candidates to the hospital (candidates whom Lukashenko, this year, magnanimously allowed to run for office). Critical journalists and human-rights activists were also brought to account."

"The brutality of his government will correct observers who believed Belarus had made careful steps toward liberalization. There were, no doubt, signs of thaw: During this year's campaign, opposition candidates had at least limited access to state-run media. But these concessions were ascribed by some to a temporary deterioration in Belarusian ties to Russia, rather than a real change of heart. Lukashenko has confirmed this view, with crystal clarity -- again."

"The misdeeds under Lukashenko aren't new. What is new is that Germany and its EU partners believed a little fair-weather diplomacy would change everything. Lukashenko, unmoved, has taught them one better."

"Of course it's right for the West to demand democratic reform. But the EU has a limited number of options to influence Minsk. European leaders should have considered more carefully whether such a high-level meeting (last November) had any real prospect of success. It was the first time in 15 years that a German foreign minister had honored the Belarusian president with a visit. Authoritarian regimes know how to exploit such pomp and circumstance."

"The EU has done a lot that's right, and very little wrong, in its behavior toward Belarus. Now it should resist any knee-jerk response. The arrest of almost all presidential candidates has justifiably outraged the West and blocked the way toward a new era (in Belarus). The country just isn't far enough along. Financial help, and easier visa policies, should remain tied to certain conditions -- including democratic reform, which Belarus demonstrated in small measure this year by allowing opposition candidates to appear on TV."

"But Belarus can't hope for democracy in the near future. And many people across Belarus would be thoroughly demoralized should the West turn away in disgust.... The cabal with Moscow only emphasizes how narrow Europe's room for maneuver is. But Lukashenko has closed his own narrow opportunities for good relations and lapsed back onto a post-Soviet dependence that he once believed he'd conquered. If he wants to fulfil his own propaganda, and bring Belarus into the world's list of top 50 economies, he has no choice: He needs to open the nation up. He can't reach his own ambitions without the West."

"At some point even the Kremlin found it absurd to be played for such a fool by the president of Belarus. The old idea of a Russian 'union' began to sound tuneless. The little Soviet brothers would have to learn for themselves how to survive a frigid winter in the no-man's land between Russia and Europe. Eventually -- the Kremlin seems to have understood -- history and geography would do the tutoring for Mother Russia. The (Western) dream that more democracy would move Belarus further West has not grown likelier with the recent election."

"But why do strong men -- in Africa or Asia or, in this case, on the doorstep of the EU -- need election majorities hovering near 100 percent? The first West German chancellor, Konrad Adenauer, started his long term in office with a one-vote (parliamentary) majority, and John F. Kennedy proved in his day that a narrow victory is also a victory. The world of potentates is different. On the one hand they give lip service to democracy and allow elections; on the other, they never allow those elections to bring change. The OCSE has made only mild criticisms of (Lukashenko), hoping to stay in the game. But fraud is fraud, and dictatorships never change." 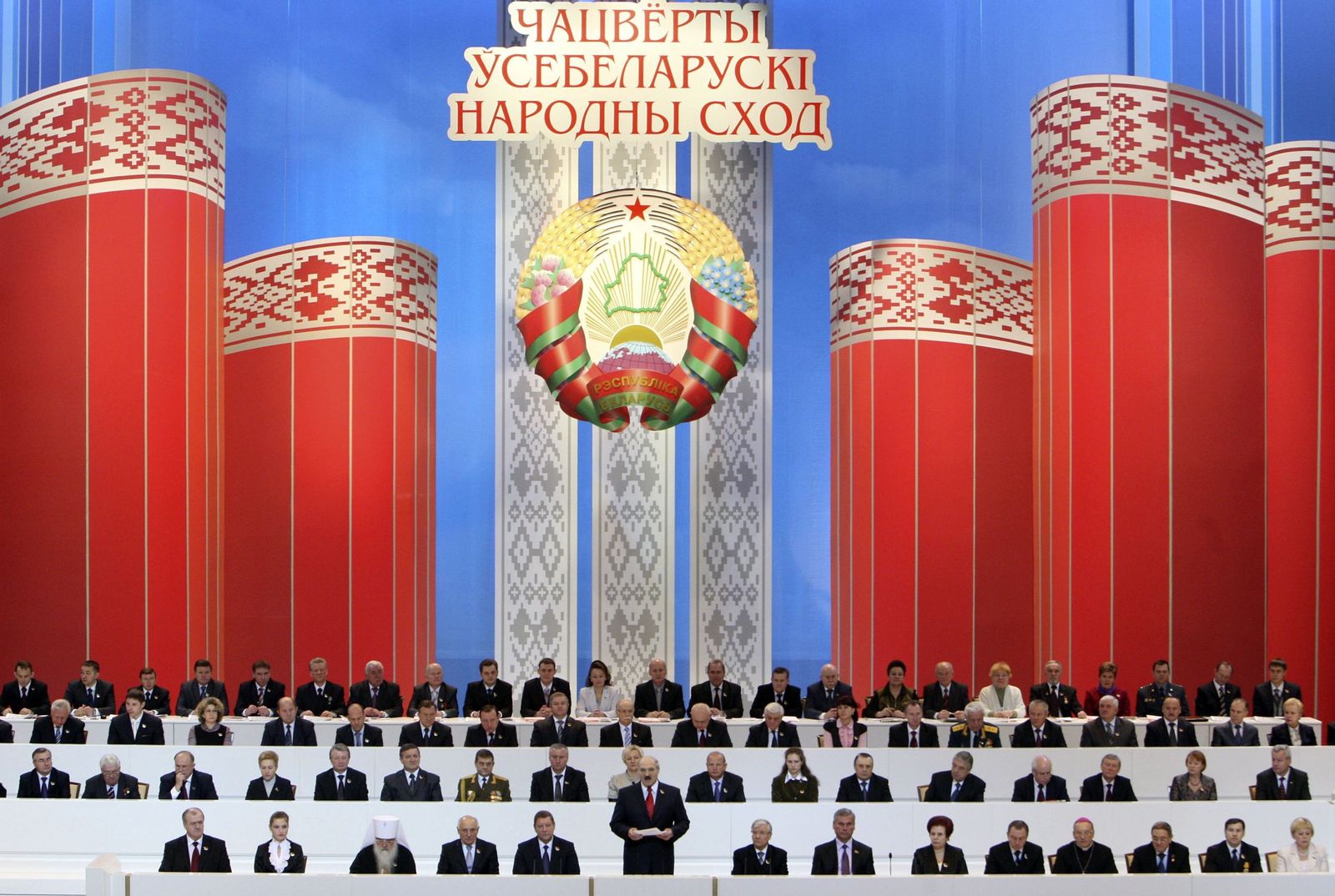