When the announcement came on Thursday evening that Dresden's Elbe River Valley had lost its UNESCO World Heritage status, few were surprised. The site had long been seen as endangered due to ongoing construction of a new bridge across the valley. And the city had, for just as long, insisted that the structure was necessary to ease traffic woes in the eastern German metropolis and pointed to a 2005 referendum in which 67.9 percent of the city's residents voted in favor of the bridge. 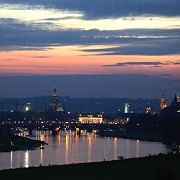 Still, many in Germany are sad to see the site removed from the list. Federal Commissioner of Culture Bernd Neumann said "it is more than regrettable that those involved weren't able to reach a compromise."

He was echoed by Stanislaw Tillich, governor of the state of Saxony -- of which Dresden is the capital. "I regret the decision of the World Heritage Committee.... It is too bad that the will of the citizens and the decision of the committee could not be brought together."

After an extensive back and forth, preparations for the construction of the €160 million bridge began in late 2007, despite last minute calls to revisit the plans in the hopes that Dresden would ultimately opt for a tunnel. UNESCO on Thursday said it was removing the Elbe Valley because the bridge would damage the "outstanding universal value" of the landscape. After being thoroughly demolished in 1945 by Allied bombing raids, the city was painstakingly reconstructed. Its distinct baroque architecture and the city skyline have earned Dresden the moniker of "Florence on the Elbe."

The Elbe valley was first given the designation in 2004, but it was placed on a list of endangered sites in 2006 after the city's plans for the bridge were made public.

On Friday, though, UNESCO was able to offer Germany some good news. The World Heritage Committee decided to add the Wadden Sea tidal flats on the North Sea coast to the list, bringing the number of German sites back up to 33. The area is one of Europe's richest biospheres, full of undisturbed wetlands teeming with wildlife.

"Many of Dresden's inhabitants are worried that the city will once and for all lose its splendor. But is that really true? Whoever believes that underestimates the power radiating from this city. Dresden is pregnant and burdened with history, and just hearing it's name has a very deep resonance for Germans. As a result, there is a certain heightened sensitivity here, and messing with the city's skyline elicits immediate defensive reactions marked by a nervous passion. But even that shows just how much vitality this formerly independent commonwealth has and that it is much more than just the sum of its parts. "

"No bridge can destroy that. There is a particularly strong impulse in Germany to protect and preserve monuments, wetlands and other places of natural and cultural beauty. Perhaps a bit less developed, though, is the ability to see the modern's encroachment upon the familiar as something other than a catastrophe as well as the ability to integrate the two into the overall image that we have of our environment. Dresden will survive this onslaught of the present on the past."

"For Saxony and its 'Florence on the Elbe,' being thrown off the UNESCO list is the logical consequence of an unbounded self-infatuation. Dresden has suffered much. Its payback has come in the form of the financial help from Germany and abroad, which has transformed the city into a baroque wonder. But, little by little, it became spoiled, self-centered and smug.... Being stricken from the UNESCO list will be painful, but it might also turn out to be an important moment of maturation for both Dresden and Saxony. But for UNESCO ... the decision is a rather pathetic victory. Perhaps when such institutions react to the situations in Pompeii, Beijing, Angkor Wat or Babylon as energetically as they did in Saxony, they can show that they are genuine custodians of our global heritage."

"The decision was the correct one. Without any regard for nature, cultural history or contracts ruled by international laws, the automobile lobbies in the center-right Christian Democratic Party (CDU), the business-friendly Free Democratic Party (FDP), the ADAC German motor club and the administration of the state of Saxony pushed through the construction of the bridge -- a bridge that will cut right through what was up until recently idyllic meadows, right through one of Germany's most famous urban panoramas."

"UNESCO found the courage and the strength to make a loud and clear signal that even rich and powerful countries must respect contracts and rules. But it's still impossible to tell the damage that open-road aficionados, provincial insularity and unimaginative politicians have wreaked on both Dresden and the international reputation of Germany's cultural policies."

"In recent years, UNESCO has been very liberal about who it bestows its honorary title upon. But it becomes absurd when any old thing can be classified as belonging to our 'global cultural heritage' and you run into such sites everywhere you turn.... Dresden will continue to be 'Florence on the Elbe,' and this slap on the wrist isn't going to scare floods of tourists away from visiting the city."

"It would be disingenuous to attribute this situation exclusively to the complications of a democratic process.... UNESCO's World Heritage Committee also played a clear role; it sat back and watched Dresden squirm while placing a questionable emphasis on purism. Behind this behavior is an attitude which holds that only the untouched have the right to claim the title of being part of the world's cultural heritage; that culture is a sacrosanct remnant from the past. Early on, UNESCO put its foot down and insisted that the only alternative would be to build a tunnel running under the Elbe. The committee emerged as the Keeper of the Grail for whom the only cultural goods that have value were those of museum quality. But cultural goods are also invigorated when they are called upon to stand as a witness to a past that is re-integrated into everyday life.  UNESCO might have reached a decision, but it didn't find a solution."