For more than 12,000 young men in Germany, Jan. 3, 2011, was a special day in their lives, though maybe not for reasons they would have chosen. It was their first day of compulsory service in the Bundeswehr, or German armed forces.

It was also a historic moment for Germany, as those men are the last conscripts the German army is likely to see for a long time. After more than 50 years the Bundeswehr will suspend compulsory service this July 1. Monday's round of draftees are the last post-war Germans to perform obligatory military service, which now lasts six months. The next intake, in March, will feature only volunteers.

The reform belongs to plans to reduce the size of the Bundeswehr from around 240,000 soldiers to a professional army of 170,000. Voluntary basic training will still be an option -- it will last between 12 and 23 months and will be open to both men and women. Between 7,000 and 15,000 volunteers are expected per year.

Defense Minister Karl-Theodor zu Guttenberg, who wants to streamline the army for foreign missions, pushed through the reform despite opposition from many conservative politicians. It is hoped the measure will save €8.3 billion ($11 billion) -- money that the federal government will welcome in its bid to cut its budget deficit.

Technically conscription will be "suspended" -- a solution that avoids having to amend the German constitution -- but it seems unlikely to be reactivated. The move brings Germany into line with other European countries like Britain and France that have professional armies.

Conscription began in West Germany in 1957, and suspending it marks the end of a postwar tradition. For decades conscription was seen as essential to German democracy because it supposedly anchored the army within society, preventing it from becoming an elitist force, as in the Nazi era. The number of men performing military service has declined sharply in recent years, though -- in part due to a desire on the part of the Bundeswehr to minimize the number of conscripts it takes. The young recruits are of little use to the modern German military, which focuses on NATO and United Nations operations overseas.

On Tuesday, German media commentators take a look at the passing of the conscription era. Some are nostalgic for the character-building experiences of the past, but others argue the reform is long overdue.

"It is the end of an era ... We do not need to glorify the draft in retrospect. There were idle periods and tasks assigned only to keep recruits busy, at least when service still lasted over a year. But there were also experiences that one would not have gained otherwise: sharing a room with buddies who came from very different social backgrounds; the process in which such a mixed bunch became a group where everyone took responsibility for the others; and the final stage, where the 'old hands' among the conscripts took the new recruits under their wing or possibly even had to train them, in what was many recruits' first taste of leadership."

"The value of such experiences cannot be measured in euros and cents, and their significance for national security may be negligible. But the question of whether society will feel their lack can only be answered in a few years' time."

"In postwar Germany, conscription was always more than a means of filling the ranks. It was supposed to symbolize that the Bundeswehr (Germany's postwar military) was something completely different from the (prewar) Reichswehr -- not a state within a state, but a citizens' army. For decades, both the conservative Christian Democrats and the center-left Social Democrats exaggeratedly declared conscription to be an untouchable pillar of democracy. It belonged to postwar Germany just like the deutsche mark. Now it is being abolished -- and nobody minds."

"The fact that this reform is taking place with so little fuss is also related to the typical postwar German indifference to all things military. People would prefer to have nothing to do with it. This is a peculiar kind of historical awareness, a distant echo of the horrors of World War II. In addition, everyone knows that conscription in Germany has long been just a show. In 2010, fewer than 60,000 recruits were drafted -- around a quarter of the total 20 years earlier. The Bundeswehr, which has long been a de facto professional army, does not need conscription anymore. Leaving aside postwar German mythology for a moment, this reform is just an overdue adjustment to European norms. In the era of high-tech weaponry, large conscript armies are a relic of the 19th century."

"For 54 years, young German men went to the Bundeswehr as conscripts, a total of more than 8.5 million over the years. They served their country for a few months … That was a good thing, for the country as well as for the young men. Serving society left its mark on every individual -- mostly a good one. And the Bundeswehr profited from the fact that young men from all social classes performed military service."

"Now a new era is beginning. The Bundeswehr will have to attract volunteers and career soldiers. It will stand in competition to universities and apprenticeships. This will transform it from the ground up. If military service does not become more attractive, then soon the only people who sign up will be those who have no chance on the job market. With the abolition of conscription, a piece of Germany's postwar tradition is dying -- the history of citizens in uniform!" 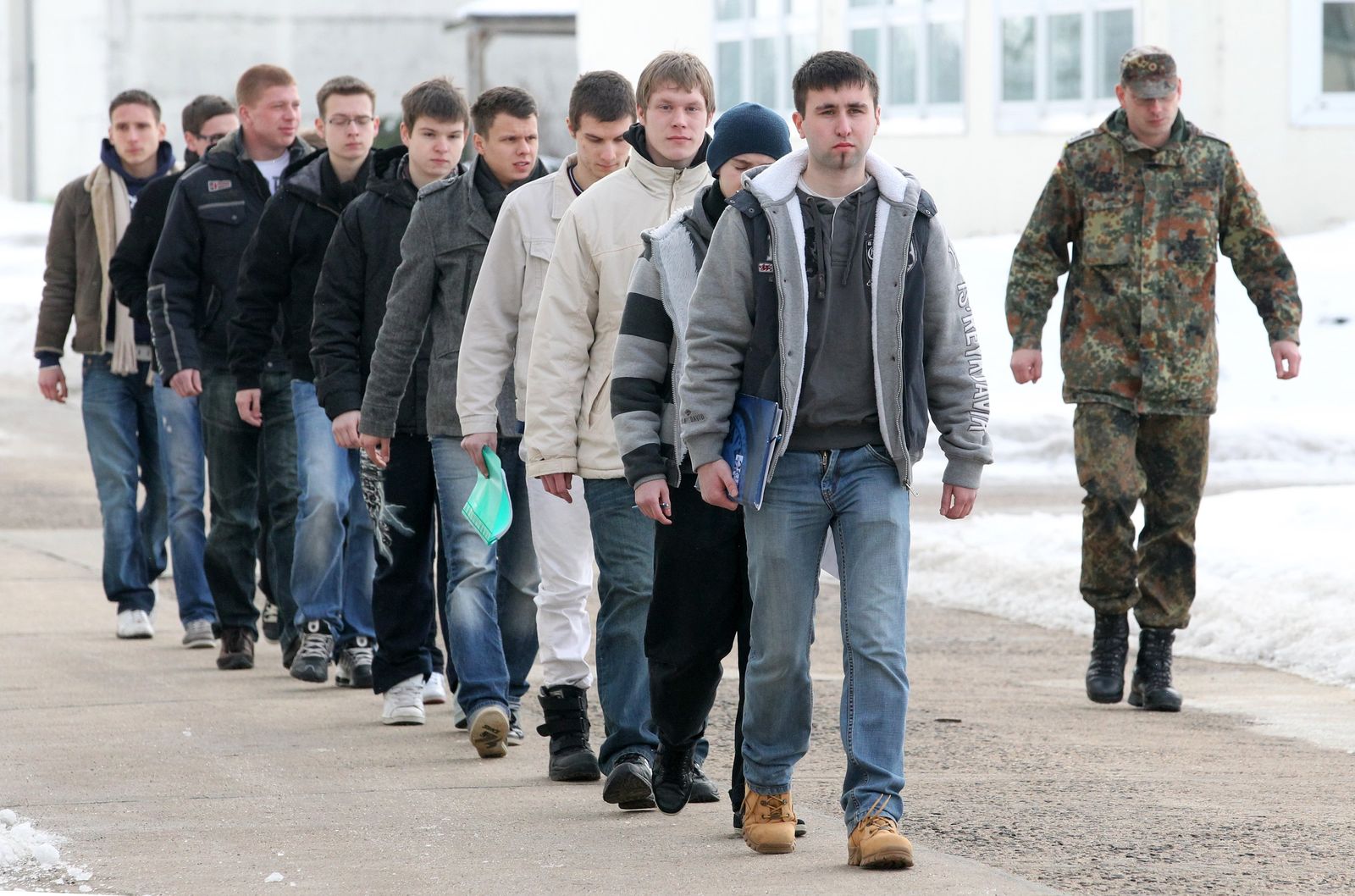 The German army's last conscripts showed up for duty on Monday, including these men in the city of Neubrandenburg.