Nuclear politics in Europe have been roiled by rumors and unexpected changes since Chancellor Merkel's recent decision to lead Germany away from nuclear power -- again -- by about 2021. Switzerland also announced its own, slower phase-out on Wednesday, saying the country's five nuclear plants would be allowed to go dark by about 2034. Rather than seek an ambitious, German-style "energy revolution," Switzerland plans to simply build no new reactors and let the older plants grow obsolete.

A story in yesterday's Financial Times Deutschland also reported that Merkel's government would revoke a stiff new fuel-rod tax, perhaps as a sort of consolation prize to the German nuclear industry worth an estimated €2.3 billion ($3.3 billion). On Wednesday, however, a government spokesman denied the report. "There is no such decision," Steffen Seibert told reporters in Berlin. "It's very clear that when the government puts forward its concept to accelerate (the nuclear phase-out), it will address individual questions, as well as financial questions."

Stress Tests, but Not for Terrorism

On Tuesday, the EU also announced finalized guidelines for stress tests of European reactors, which some EU leaders had been demanding since the Fukushima catastrophe in Japan. Still, the tests will be less rigorous than some leaders -- including Merkel -- have been demanding. The EU's energy commissioner, Günther Oettinger, told reporters this week that, starting June 1, regulators will have to check European nuclear plants for disaster preparedness against a range of threats, including earthquakes, floods, tsunamis and extreme temperatures.

Although Merkel also wanted the package to include full counter-terroism inspections, Oettinger told German radio that he could respect that some member states don't want "to show their cards" and that doing so "could even abet terrorism." Instead, he said that it would be best to let security agencies at the national level inspect vulnerability to terrorism.

Merkel has maintained pressure not only for the planned German phase-out, but also for increased nuclear-safety efforts around the world. In a position speech she delivered Thursday before the Bundestag, Germany's lower house of parliament, before heading to Deauville, France, for a G-8 summit, Merkel said that "a full review of security standards on an international level" was needed.

In Thursday's papers, German commentators react (and sometimes overreact) to the fuel-rod tax, the Swiss phase-out and other related developments.

"The stock market cheered yesterday's news about an end to the fuel-rod tax in Germany. Shareholders in nuclear companies were happy with the prospect of a profit boost. But this gift to the markets will also have a price tag for the public because Germany's budget would then lack the billions we stand to expect from (giant energy concerns such as) E.on, RWE, Vattenfall and EnBW."

"The government's energy policies since Fukushima don't offer a single plausible explanation for an end to such a sensible tax. The fuel-rod revenues were meant to win back at least some of the cost of nuclear waste disposal from the companies responsible for it. Now the government wants to offer concessions to the nuclear industry to ward off lawsuits based on Germany's previous phase-out plan. It would be preferable to see the government shoulder the risk in court than be part of such a sordid quid pro quo."

"After multiple core meltdowns in Japan, there is no longer any doubt permitted in Germany: The country must move as quickly as possible away from nuclear energy."

"(With its announcement, Switzerland has shown) that responsible humans can draw different conclusions from Fukushima. On Wednesday, in the motherland of direct democracy, the executive Federal Council decided against a swift nuclear phase-out. Despite both Chernobyl and Fukushima, reactors in the Alpine state will remain online until 2034."

"Behind the decision to leave vulnerability to terrorism off the general list of safety checks (in the EU) lies a basic understanding that, in many regions, nuclear energy continues to make indispensable contributions to having secure national energy supplies and to climate protection."

"A banana sold in the EU needs to be at least 14 centimeters (5.5 inches) long and 27 millimeters (1.1 inches) thick. For nuclear power plants, though, there are no unified EU standards, and every nation can pretty much do as it pleases."

"The situation couldn't be more absurd. If a nuclear reactor goes out of control somewhere in the EU, the entire continent could be harmed. But, on this particular matter, every member state enjoys full freedom of choice on what to demand and what to allow. The thought of having an organization like the EU only set trivial standards is intolerable. And this is more than ever the case after Fukushima. The Union risks turning itself into, well, a banana republic."

"It's increasingly clear that Germany's energy revolution requires capable people who can work hard to replace nuclear energy with renewables. Yesterday, (which was a warm day in central Europe,) the nation's photovoltaic facilities produced a total of 120 million kilowatt-hours of solar electricity -- thereby replacing the daily output of four nuclear reactors."

"Establishing facts like these will be the best way to end the epoch of atomic madness for all time -- in Germany as well as Europe." 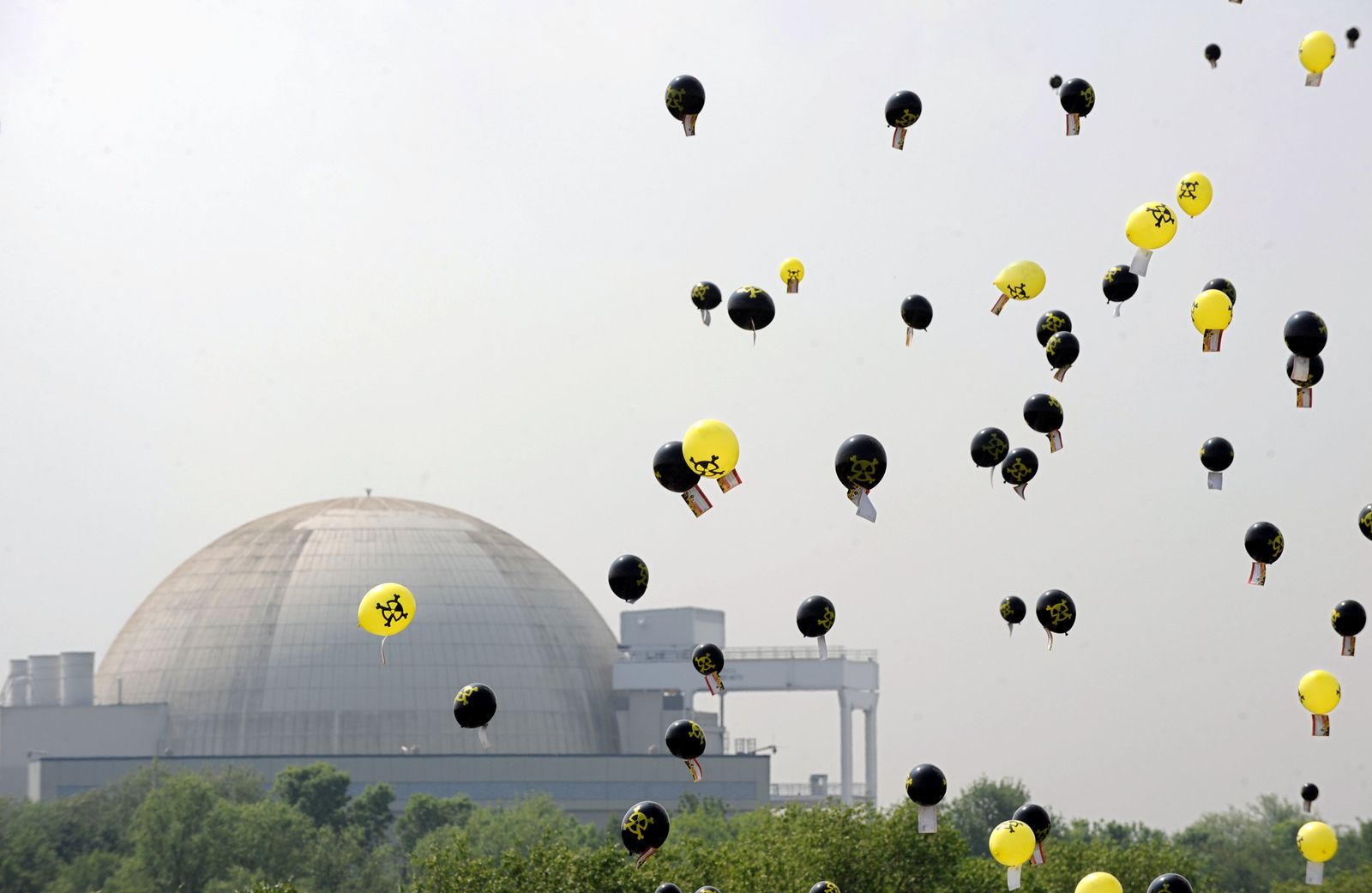 German protesters on Saturday released thousands of balloons in front of a nuclear power plant near Bremerhaven to indicate where the wind might carry a radioactive cloud. Public feeling against nuclear power has mounted in Germany since the March disaster in Japan.