It is hardly a novelty that a European Union treaty lands before the German Constitutional Court. For years, the guardians of Germany's constitution have periodically taken a look at EU integration to make sure that Berlin is not exporting too much of its sovereignty to Brussels. And the answer has always been the same: This time it's okay, but don't go too far. 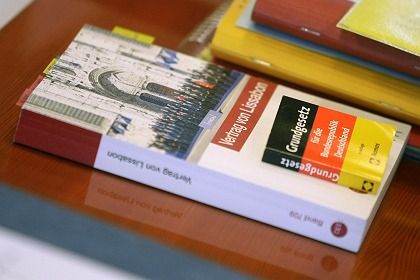 Germany's high court has doubts about the Lisbon Treaty.

This week, though, with the Treaty of Lisbon -- the EU's blueprint for the reform of the 27-nation bloc's decision-making process -- under consideration, indications are mounting that the German court may put its foot down. During oral arguments on Tuesday, justices asked unexpectedly critical questions and raised the possibility that the court could reject the treaty outright or demand a nationwide referendum.

Referring to the shifting of law-making competencies from Berlin to Brussels, Justice Udo Di Fabio pointedly asked whether the shifting of responsibilities to the European Union "is beneficial to freedom" or whether the trend toward Brussels should more accurately be seen as an "endangerment of freedom."

The skeptical tone from the bench continued on Wednesday. "One has to look at things soberly: How much power does the Bundestag (eds note: Germany's federal parliament) still have?" asked Di Fabio. A second justice, Rudolf Mellinghoff, said he didn't really understand how Germany's parliament would benefit from handing over competencies to the European Union.

In particular, the court indicated deep skepticism about provisions in the Lisbon Treaty which would allow for the EU to have a say in German criminal law. Given the doubts, it seemed this week unlikely that the court would rubber-stamp the treaty without demanding changes. The court also placed a discussion of Article 146 of the constitution on the agenda for Wednesday. The paragraph stipulates that a national referendum must be held if any part of the constitution is superseded.

The Lisbon Treaty is the European Union's answer to the 2005 rejection of the EU constitution in referenda in France and the Netherlands. The document is aimed at streamlining EU decision-making procedures and granting more legislative power to the European Parliament. Germany is one of four countries which have not yet ratified the Lisbon Treaty -- joining Ireland (which rejected the treaty in a referendum last June), the Czech Republic and Poland. The German parliament approved the treaty last April, but President Horst Köhler withheld his signature pending legal challenges filed by a number of appellants, including parliamentarian Peter Gauweiler, a member of Bavaria's Christian Social Union -- the sister party to Chancellor Angela Merkel's Christian Democrats -- and the Left Party. Franz Ludwig Schenk Graf von Stauffenberg, the son of Claus von Stauffenberg, who attempted to assassinate Adolf Hitler in 1944, is also among those who challenged the treaty.

Indicating the importance Berlin attaches to the treaty, both Foreign Minister Frank-Walter Steinmeier and Interior Minister Wolfgang Schäuble appeared before the court on Tuesday to defend the treaty. Schäuble warned the court against seeing every gain for Brussels as a loss of German sovereignty. Steinmeier said "the Treaty of Lisbon emphatically strengthens the democratic foundations of the European Union."

Dieter Murswiek, Gauleiter's council, called the treaty a "gigantic camouflage" and says the treaty is nothing more than a repacked version of the rejected EU constitution. He said the treaty would transform the EU into a "state-like construct" and said that it would make the "notorious democratic deficits in the EU" even worse.

Should the court rule that parts of the Lisbon Treaty are not in harmony with the German constitution, it would likely mean the end of the document. Any adjustments would mean new negotiations involving all 27 member states. The treaty was already modified following its rejection in 2005. After Ireland voted down the treaty last June, minor adjustments were made in anticipation of a revote. Fundamental questions like those raised by the German court on Tuesday, however, would likely be more difficult to change.

"The German Constitutional Court in Karlsruhe  began proceedings on the constitutionality of the Lisbon Treaty by devoting hours to (a reading and explanation) of the treaty. For those petitioning against the Lisbon Treaty, its illegibility is proof of its glaring democratic deficits. For supporters of the treaty, though, the incomprehensibility is proof that the document does not represent the transformation of the EU into a "state-like construct," as its opponents claim. It isn't a European constitution, they claim, but just a complicated instruction manual for an expanded EU."

"The treaty won't fail due to its complicated nature. If the justices intervene, which is to be expected, then it will be because the EU's expansion of competencies has not been followed by an expansion of democracy. Europe is suffering from too little democracy."

"That the appllants want to stop the construction of the European house was impossible to ignore during Tuesday's arguments. Germany would be giving yet more power to Europe, complained Gauleiter's council. And he's right. But is there a reasonable alternative?"

"Take energy policy as an example: The Russian-Ukrainian natural gas crisis has just shown that EU member states alone can do little in a battle with an energy supplier like Russia. Immigration policy is another example: it is not possible for a single EU state alone to cope with the constantly growing stream of refugees from Africa. The Lisbon Treaty calls for making energy and immigration policy -- previously regulated on the national level -- into an EU-wide affair. It is a step that is long overdue."

"The appellants criticize alleged democratic deficits in the new treaty. That accusation is completely wrong. This document would grant (the two German houses of parliament) completely new possibilities to influence European policy. If 28 of the 54 houses of parliament in the EU veto a piece of EU legislation, it must be withdrawn by the European Commission. That is a novelty in the history of EU law. In addition, the European Parliament gains an enormous amount of influence."

"The justices should be careful not to barricade themselves in the ivory tower. The have to keep the political consequences of their actions in mind."

"The history of European integration is the history of the erosion of democracy. National parliaments have sent power to the European Parliament -- but it never really arrived. The reason is clear: Each time the treaty was reformed, the governments involved made sure that important elements of parliamentarian democracy were missing."

"The European Constitution was the first effort to reverse this trend. But precisely those who complained the loudest about democracy deficits in Europe rejected it. They wanted more, and they got the Treaty of Lisbon. It represents the balancing act between holding on to the democratic substance of the constitution while at the same time veiling Brussels' demand for Europe-wide sovereignty."

"But it is clear to a number of European governments that, in times of climate change, energy difficulties and financial crisis, they can't afford a diffuse and unresponsive European Union."