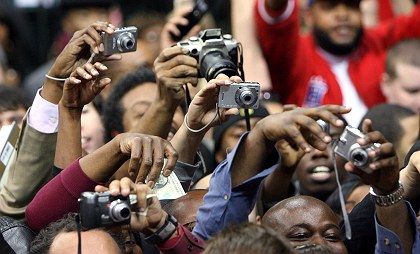 Barack Obama fans hoping to get a picture of their hero at a campaign appearance in Dallas, Texas.

Barack Obama's run has now reached 11. On Thursday, results from the Democrats Abroad global primary were announced, and once again, Hillary Clinton has been defeated by her rival from Illinois. The global primary involved voters in 30 countries overseas and took place during the week beginning on Feb. 5 -- the date of Super Tuesday, which is also the last time Hillary Clinton was able to win a pre-election contest.

Clinton remains hopeful that primaries early next month in Texas and Ohio could shift the momentum back in her favor. For her to erase the current lead enjoyed by Obama, however, Clinton would have to win 57 percent of the delegates still available. According to the AP, Obama has 1,351 delegates to 1,262 for Clinton, with 2,025 necessary for the Democratic nomination. "If she wins in Texas and Ohio, I think she'll be the nominee," said former President Bill Clinton at a campaign event in Texas on Wednesday. "If you don't deliver for her, I don't think she can be."

Obama-mania has spread well beyond the shores of North America and interest increases the longer his winning streak gets. On Thursday, the only thing German commentators wanted to talk about was the phenom from Illinois and the race for the Democratic nomination.

"As a serial loser, (Senator Clinton) must now fight against the collapse of her campaign. There is always the question of whether a smear campaign -- something the Clintons are always good at -- would really help her, as it's a risky tactic that has already gone wrong twice. But the more desperate Clinton gets, the more prepared she will be to risk it all. This seems to be the calculation made by John McCain, the presumptive Republican candidate, who is also a Clinton ally -- for now. Both are thrashing Obama's lack of experience and are portraying him as a security risk. It's clear that McCain would prefer to face off against Clinton. That's because he could beat her, but he'd have a very hard time against Obama and his rhetoric of change."

"What's so bad about a blank page? In theory, nothing, and (Obama) will surely have capable advisers. Perhaps he will retain his charismatic style and bring a healthy freshness to the (White House), even if there is a greater danger with him than with the other candidates of being caught up in the vortex of the apparatus and consumed by people whispering advice."

"But that makes you wonder uncomfortably: How will Obama react under pressure? In a crisis? What would happen if the mood changed and the motto could no longer be 'all pleasure, no pain'? How susceptible is he to ideological vacillations? George W. Bush allowed himself to be controlled too easily because he was just too weak. As things look today, Barack Obama isn't going to alleviate this worry any time soon. America will just have to accept a little buyer's risk, if it wants Obama to be president."

"By US measures, Obama is a leftie, but he understands the voters' desire for confirmation that a country is more than a possession of a party or the prouct of one group's political ideals."

"Psychologically, Obama is benefiting from the sheer momentum of his victories, and nothing breeds success like success. Clinton's aura, on the other hand, lies in ruins, which is also causing donors to abandon her. Donations for Obama are bubbling up all the more profusely."

"The closer Obama gets to victory, however, the more public scrutiny he is under. The dream story of a charismatic underdog is just about to end. And once that's over, the public will be after political substance."

"It might just be that Hillary Clinton's way of campaigning drove the voters to Obama. The senator from New York was not alone in considering herself the almost inevitable candidate for the Democratic Party. And her entire campaign was organized based upon this premise. Her strategy held that -- with almost 100 percent certainty -- she would practically have the votes in her pocket after the first five weeks, and this says a lot about her character. And it is obviously a character trait that has cost her more and more sympathy."