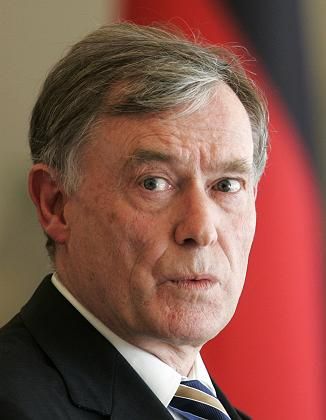 German President Horst Köhler: "We came close to a collapse of the global financial markets."

Capitalism -- at least in its dreaded red-in-tooth-and-claw Anglo-Saxon variety -- is not cool in Germany, it seems. All across the political spectrum, it is hard to find any German politician with a good word to say about financial markets, hedge funds and the dreaded speculators -- especially in the wake of the ongoing global financial crisis.

Franz Müntefering, the former chairman of the center-left Social Democratic Party (SPD), added a new term to the German political lexicon in 2005 when he described private equity firms as "locusts." Current SPD leader Kurt Beck warned of the dangers of neo-liberalism in a 2007 essay for the respected Frankfurter Allgemeine Zeitung. Even an über-capitalist like Deutsche Bank CEO Josef Ackermann commented recently that the markets were incapable of resolving the financial crisis by themselves.

Now Germany's President Horst Köhler has entered the fray in a hard-hitting interview with the weekly magazine Stern. Coining a term which is likely to become as popular as the infamous locusts, Köhler, who belongs to Angela Merkel's conservative Christian Democratic Union, said that the search for profits has turned the markets into a "monster."

The financial word has "greatly disgraced itself" in the global financial crisis, he told the magazine, adding that he would have liked to have seen "a clear and audible mea culpa" on the part of the banks. He also criticized the "bizarrely high compensation for individual financial managers."

Köhler called for "stricter and more efficient regulation" in response to the market turbulence, which has caused serious fallout at several German banks. He was critical of the increasingly sophisticated investment vehicles that helped to spark the crisis. "The over-complexity of the financial products, and the possibility of carrying out large leveraged deals with a small amount of capital, have allowed the monster to grow," Köhler said.

The president had a stark assessment of the severity of the crisis. "I want to hope that the worst is past," Köhler said. "Nevertheless, we came close to a collapse of the global financial markets."

The criticism is given added weight by the fact that Köhler is the former head of the International Monetary Fund (IMF). During his illustrious career he has also been a junior minister in the German Finance Ministry, chairman of the association of savings banks in Germany and president of the European Bank for Reconstruction and Development.

However some observers are suggesting that Köhler's comments are motivated by a desire to run for a second term as German president. His term of office comes to an end in 2009. If he is to be re-elected, he will need the support of the SPD, which has recently shifted to the left. A touch of anti-capitalist populism might be just what he needs to convince the SPD's left wing to support him.

And indeed, Köhler did receive praise for his words from within the ranks of the SPD Thursday. The party's general secretary, Hubertus Heil, told the Saarbrücker Zeitung that it was good that more and more political and business leaders are addressing the "dramatically wrong developments" in the international financial markets. However Heil said the SPD had not yet decided whether to support Köhler in a second term. Nevertheless, the Süddeutsche Zeitung quoted sources in the SPD as saying that the party's leaders were not intending to put forward a counter candidate should Köhler run for a second term.

Oskar Lafontaine, the head of the far-left Left Party, also praised Köhler's position. "It's good that Köhler is now -- like the Left Party and in contrast to Chancellor Merkel and Finance Minister (Peer) Steinbrück -- demanding tighter regulation of the banking sector," Lafontaine told the Berliner Zeitung.

Commentators writing in Germany's more business-friendly newspapers Thursday are skeptical of the usefulness of Köhler's analysis -- and of his motives.

"Horst Köhler is doing a Franz Müntefering. Just as the former chairman of the SPD reviled international financial investors as locusts, now the president is painting a picture of the ugly face of capitalism.  But unlike with Müntefering, a committed Social Democrat and a union member, Köhler's capitalism-bashing -- given the president's professional background -- sounds not just unconvincing but even absurd. Horst Köhler is a downright insider in the financial system. Before he became German president, he was chief lobbyist of the German savings banks and head of the International Monetary Fund.

"Köhler's fashionable rhetoric leads one to a simple conclusion: The president is trying to win new friends in the SPD. If Köhler seeks a second term in office -- as most observers expect -- then he will be dependent on SPD support ... The danger of him losing the vote would be large if the SPD were to put forward their own counter-candidate. That is something the party's left wing in particular is demanding. Köhler is now trying to curry favor with them with a clear signal: 'Look -- I am no longer the neo-liberal that you think I am.'

"The presidential polemic is not only dubious because it rivals the populist discourse of Germany's left. Support for capitalism is dangerously underdeveloped in Germany, not least because many people do not understand how the financial markets actually work. A president with the background and the knowledge of Köhler's could have played an important role in educating the public in this respect. He would not have needed to avoid criticisms -- but a nuanced analysis would have been more useful than platitudinous blanket judgments."

"When Horst Köhler was on a meet-and-greet tour of Germany in early 2004, he said he would not mind if he was characterized as having been more avant-garde than representative at the end of his term in office. His term ends in one year, and now Köhler has put himself forward for re-election -- not formally, but with an interview in Stern. But with his roundabout re-election stump speech, he has inadvertently demonstrated that he is neither representative nor part of the political vanguard.

"Köhler is flogging a dead horse -- he is talking about problems that have been widely known for a year and have now been at least partly solved.  Certainly his fierce criticism of the financial system in general panders to the widespread sentiment, in Germany in particular, which is against everything that smells of financial speculation. Members of the political avant-garde are characterized precisely by the fact that they push for what is necessary, even if it is unpopular -- rather than promoting what is popular even if it is of dubious usefulness."

"With the term 'monster,' President Horst Köhler has used a word which could easily enter the popular vernacular just like Franz Müntefering's 'locusts' did  The president's choice of words gains extra weight because of his indisputable authority in terms of economic issues -- after all, Köhler was head of the IMF, president of the association of savings banks and a junior minister in the Finance Ministry.

"Nevertheless, the question remains whether the term, which smacks of populism while also over-simplifying the context, is really appropriate to the subject matter. The global financial crisis of the last few months is an incredibly complex phenomenon that is still to be fully analyzed. The only thing that is certain is that simple explanations like 'the Fed is to blame for everything' or 'bankers' greed is responsible for the whole thing' just will not do.

"As long as the investigation into the causes of the crisis is continuing, any discussion about regulations which might be necessary remains fragmentary and unsatisfactory. Pithy words don't change anything -- even if they reflect sentiments that are widespread among the general public."