It's been a tough week in Germany for proponents of genetically engineered farm products. First Agriculture Minister Ilse Aigner announced a ban on cultivating a strain of genetically modified (GM) corn. Then on Wednesday, demonstrations were held in the Bavarian capital of Munich and the Hessian capital of Wiesbaden against a patent on a breed of pig. 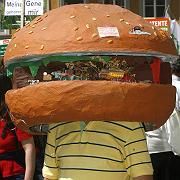 A demonstrator in Munich wears a model of a hamburger on his head.

Around 400 people demonstrated on Munich's central Marienplatz square before moving on to the nearby headquarters of the European Patent Office, driving a small herd of swine. Their placards featured slogans like "no patents on life" and "stop the patent on the poor pig." Bavaria's Environment Minister Markus Söder, who has positioned himself as a prominent critic of genetic engineering in recent years, addressed the crowd. "We don't believe in the future of GM foods," he said to great applause.

The pig patent, EP 1651777, is an attempt by the US-based company Newsham Choice Genetics to register a faster-growing meat pig within the European Union. The line of corn, Monsanto's MON810, has been protected by a patent for years, and produces a toxin that kills the potentially devastating corn borer moth. The corn seed has faced bans in a few European countries -- against the European Commission's will -- and the German decision to ban it just before farmers are due to plant their crops is an anti-Brussels gesture that should go down well in Aigner's home state of Bavaria.

Aigner's party, the CSU, is a Bavarian sister party to Angela Merkel's conservative Christian Democrats. It has reason to worry about winning seats in the European Parliament this June and in the German parliament in September's national election. But the reason Aigner gave for the ban is simple: Monsanto, the corporation that sells the corn seed, can't guarantee that it will have no adverse effect on the environment. Recent tests from Austria suggest MON810 could reduce fertility in mice.

The swine patent likewise stems from Monsanto research, although Newsham bought the patent and its related corporate group from Monsanto in 2007. The protesting farmers in this case worry about an encroachment of patents into their fields and stalls, where traditionally no one has been able to demand money from them for cross-breeding.

German papers on Thursday are simmering over whether popular resistance to genetically modified corn and patented swine is a matter of kneejerk mistrust of US corporations, or an example of good science trumping hasty legislation.

"To the four small EU countries that have so far banned MON810, two large ones have added their weight: first France, and now Germany. This development can't be ignored in Brussels. For the time being, the EU bureaucrats will follow the results of a legal proceeding in France brought by (Monsanto), an international corporation. If the plaintiff wins, the EU will have a problem: It will then not be a simple matter of protecting consumers, but also, potentially, of protecting seed producers -- a group that may also include farmers."

"Opponents of genetic engineering rejoiced when Aigner banned MON180 seed on Tuesday. The joy is justified; the corn won't be planted in German soil this year. But it's a temporary triumph -- unfortunately nothing more."

"Aigner is not at all convinced that the trans-genetic corn seed is truly dangerous. Before she came to the ministry last November, she argued in favor of the technology as a research expert before the German parliament. Now she's flipped 180 degrees, within a few months, by referring to new hints of risk to the environment. But similar research has existed for years."

"What's new, however, is that the CSU are afraid of missing the nationwide 5-percent hurdle in the June elections for the European Parliament. Aigner fears that a pro-GM food position would cost votes, as polls in Bavaria predict. After the election, however, this motive will fall away."

The conservative Die Welt, in a signed editorial by Stefan Mörsdorf, a Christian Democratic environmental minister from the state of Saarland, argues:

"As long as doubts remain about this strain of corn and its potential danger to humans and the environment, it is our duty to ban it. This is neither populism nor panic-mongering. It is an act of reason -- first to test the genetic process, then to gather facts. The existing studies raise questions that need to be answered before the ban can be lifted. The security of the consumer, of everyone who works in agriculture, and of the environment itself must have absolute priority -- even above the economic interests of a genetic-engineering concern."

"The state of Saarland is free of genetically modified plants, and it will remain so in the future -- not out of populism, panic or fear of technology, but as a sign of quality in Saarland agriculture, which it is our duty to provide to consumers."

The center-left Süddeutsche Zeitung gives the most comprehensive argument against patented GM crops and breeds:

"Farmers fear with some justification that they might be sued by a patent owner. For years Monsanto has set its lawyers loose in the US against farm owners who supposedly have used genetically modified seed without paying. The protesting farmers in Munich fear a world where they can only raise patented breeds -- and then only with the consent of certain companies."

"A problem with all patents is that they assert a right to forbid. A patent owner, using intellectual property protection, can block out competitors by demanding huge fees. In the case of animals and plants, this infringes on the freedom to breed. Unrestrained access to genetic resources has been a right of all farmers for centuries."

"Politicians have been arguing about the regulations for the last 10 years. They should broach the issue one more time and unambiguously rule out patents on plants and animals -- because even the fattest pig is not a machine."