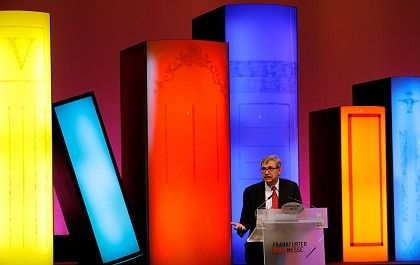 This year's Frankfurt Book Fair, by accident or design, has set publishing types chattering about the fate of the book as we know it. "When the fair opens for business today, many publishers may stop for a moment to marvel, or to shudder, at the stands displaying the Amazon Kindle and the Sony Reader," according to the Associated Press.

The abrupt focus on books in digital form -- which some 60 percent of Frankfurt attendees admit they've never used, at least according to an informal poll by the fair's organizers -- may strike some people as artificial. The bulky and expensive Kindle (an "e-book reader") hasn't, after all, turned the publishing world upside-down. But in September an American company called Plastic Logic announced plans to start selling a lightweight electronic paper -- a sort of flexible plastic display screen that will store books, magazines, newspapers and business documents -- in early 2009. The devices will be manufactured in Dresden, Germany.

Not to be outdone, Amazon and Sony and other makers of digital readers have decided to promote their devices this year in Frankfurt. Brazilian author Paolo Coelho has been corralled as techno-cheerleader; he told a press conference on Tuesday that free versions of his novels on the Web have boosted sales in some parts of the world, like Russia. "They read a few pages and think, my God, it is so much easier to buy a book rather than read on this screen -- so they go out and buy the book," he said.

But the technology to make finding a book as easy as turning on an iPod may upset even Coelho's optimism. What happens when you can just BlueTooth all his novels to your friend's e-book reader (or mobile phone)? Jürgen Boos, the book fair's director, pointed out that only 42 percent of the products on display in Frankfurt this year were, in fact, books. Digital media accounted for 30 percent, with audio books and peripheral things like calendars making up the rest, he said.

Amazon insists the Kindle can bring electronic reading closer to the experience of traditional book reading because it allows you to make (electronic) notes in the margin. German commentators on Wednesday aren't so sure. They see the coming era of e-books as a mixed blessing.

"The whole industry seems to assume this shift in media is already a done deal. It's not just the school- and textbook segments that seem possessed by the idea of de-materializing a book; it seems to grip anyone who works in a field that requires a lot of reading. It will affect, not least, books written for an intellectual, literary and intellectually demanding public."

"There is a crisis in the book trade, a serious one. It affects those books in particular which say something useful about our present-day situation, and its historical roots. Neither Orhan Pamuk's grandiose 'Museum of Innocence,' nor Ingo Schulze's lucid and light 'Adam and Evelyn,' nor Karl Schlögel's book about Stalinism, 'Terror and Dream: Moscow 1937,' nor Roger Crowley's work about the fall of Constantinople turn up on the list of this fall's twenty bestselling books. All of these titles, though, are easy to imagine on an electronic reading apparatus."

"(German publisher) Gottfried Honnefelder gave a long speech in Frankfurt about copyright problems posed by the new machines. He railed against governments which had so far failed to grapple with the legal vacuum surrounding digital media. He may be right. And how much worse it would be to watch the disappearance of a literature that can explain a world like ours -- a world on the verge of using electronic media readers, or the world beyond."

"Frankfurt has grown rawer and gruffer. Globalization has dismantled the old order of things. The annual praise of constancy, and continuity, which was the usual message of the book fair 50 years ago, has faded. Not just with the e-book."

"Even the transformation of the book fair into a production with a whiff of an auto showroom has not slowed the number of industry specialists or lay readers who make a yearly pilgrimage to Frankfurt  We don't have to worry about the survival of the book, in printed or electronic form. Because this cultural form of memory will remain a unique medium, whose charm includes its capacity to both bind people together and feed individual minds -- not to mention its capacity to lure people, even in the future, to silence and concentration."

German poet and essayist Hans Magnus Enzensberger, in the center-right Frankfurter Allgemeine Zeitung, argues with the notion that scribbling in the margins might be all-important to a reader:

"In the early 1950s I seem to have read a book called the 'Annals of German Literature' with a now-incomprehensible voracity, from front to back. I had no money for a good dictionary, so I scratched the pages full of pencilled notes. Happily I seem to have misplaced this senseless thirst for knowledge. The books on my shelf ever since have enjoyed an unsullied innocence. Here and there a yellow note sticks out from the pages, or a postcard, a plane ticket or a stray receipt. But I see no reason why I should pay such close attention to every single word on every page. As for the authors who have found a narrow place on my wall and who sit there, in polite silence, I see no reason to start telling them off with underlining, exclamation points, or bold interjections."