Does Germany need an official language? It is a question that might surprise some. After all, most would be likely to assume that the country already has an official language: namely, German. And yet, nowhere in the constitution is the idiom enshrined as the nation's official means of communication. At least not yet. 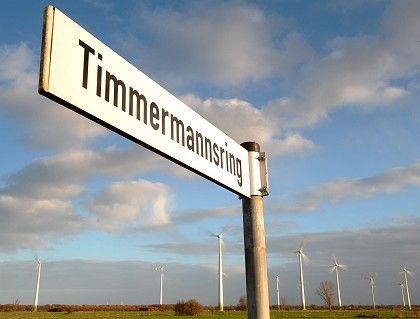 Germany needs an official language, says the CDU. But which German? Here, a street sign in the dialect "Plattdeutsch."

On Tuesday, delegates to the annual Christian Democrat (CDU) party congress, held this time around in Stuttgart, voted to support a constitutional amendment that would enshrine German in the so-called "Grundgesetz" -- or "Basic Law." German, says Peter Müller, who is governor of the south-western state of Saarland, should be "rightfully preserved" in the constitution.

It is a tricky proposition. Many see it as a mere formality, merely putting in ink what is already patently true -- that Germans speak German. But the political implications aren't far below the surface. The CDU has long seen part of its raison d' etre to be the protection of German culture -- and the party's recent history is full of efforts to defend Germanness from too much foreign influence.

Such efforts have at times been successful in attracting voters, but they have likewise backfired on occasion -- which perhaps accounts for a certain wariness by some in the CDU leadership. Ronald Pofalla, the CDU's general secretary, tried unsuccessfully to prevent the measure from being brought to a vote. Chancellor Angela Merkel, who is also head of the CDU, likewise objects, saying on German television that "I personally don't find it good to write everything into the constitution."

The Social Democrats were quick to pounce. "It's just sheer nonsense to commit oneself to recognizing the German language in the constitution," Jörg Tauss, the SPD's spokesman on educational issues, told Die Welt. "That is just the kind of posturing you typically find at a party congress."

Others worry that the CDU's motion could be interpreted as offensive to minorities living in Germany, whether it be ethnic Danes in the northern state of Schleswig-Holstein, the Sorbs in Saxony or the roughly 3.3 million Germans of Turkish origin living in the country. Ayyub Axel Köhler, the chairman of the Central Council of Muslims in Germany (ZMD), told the Hanover daily Neue Presse that the measure was "laughable and small-minded." "No one doubts that German is the official language," Köhler added. "It's obvious that knowing German is a key requirement for integration."

Should the motion be brought before parliament, the Bundestag, a two-thirds majority would be required to amend the constitution. The response from German commentators ranged from qualified support to outright derision.

"What would be so bad about following the example of 18 European countries (including Switzerland, with its four official languages) and designating German as the official language in the constitution?  The CDU demand is at best only tangentially related to the debate about cultural identity. Rather, it addresses the question as to what the lingua franca of Germany, as a country of immigration, should be."

"There's nothing to be said against enshrining such a measure in the constitution because it is a kind of commitment -- also one on the part of those whose mother tongue is German. Our language is somewhat on the defensive. You don't have to be a nationalist or an anti-American to feel that the English advancing into German officialdom is a sign of the neglect of our own language."

"In his reaction, Kenan Kolat, the chairman of the Turkish Community in Germany (TGD), unwittingly showed exactly why hundreds of upright CDU politicians think that there is a need for the resolution. No one, he said, doubts that German is the 'language of officialdom.' But the CDU doesn't want to let German be reduced to just the 'language of officialdom.' German is the national language and the common idiom in this country. To insist on that is not 'pressure to assimilate,' as the TGD would have it. Rather, it follows from integration. Under the CDU proposal, the national language would be enshrined in the constitution in the same part where the national flag is stipulated. And Germany's black-red-gold flag is not only the 'flag of officialdom,' but the flag under which the Germans unite. To use foreign flags would likewise be out of place."

"The proponents of the CDU measure also have some understandable arguments. There is no doubt that the German language is our most valuable cultural asset and that it deserves to be protected. But that begs the question of how the German language should even be defined. Who prescribes what is German and what is not? Would enshrining the German language in the constitution mean that using English words -- such as feedback, meeting, catering and laptop -- make you liable to prosecution?  Will kids at school get minus points if they find something 'cool'?"

"Some have criticized the CDU resolution for being xenophobic. But anyone with a bit of common sense will realize that it is not immigrants who are threatening the German language. If there's anyone in Germany who should be held accountable for a decline in language skills, it is us Germans ourselves -- and particularly our politicians. Via nonsensical reforms and education cutbacks, German class in many schools has been pared to the bare minimum. Plus, advertisements and industry slogans have given kids the impression that it hardly matters how one writes. Plus, spell and grammar-check will fix any mistakes."