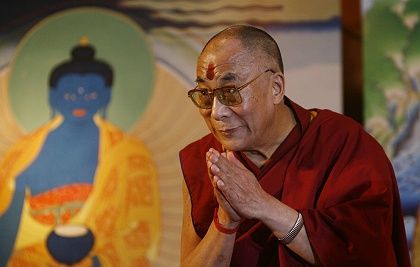 The Dalai Lama's four-day visit to Germany starting on Friday has caused a row in the German government over the refusal of top officials, including Foreign Minister Frank-Walter Steinmeier, to meet with him.

Merkel, who angered China last September when she received the Dalai Lama during a previous visit, will not be meeting him this time because she is on a tour of Latin America. President Horst Köhler's office has announced that he doesn't have time to meet him.

"I would have expected Steinmeier to show more courage," said Erwin Huber, leader of the Christian Social Union, the Bavarian sister party of the Christian Democrats. "The Dalai Lama is a symbolic figure for downtrodden Tibet, so you can't reject an offer to talk to him so coolly and undiplomatically."

Two conservative state governors, Christian Wulff of Lower-Saxony and Roland Koch of Hesse, said they would be meeting the Dalai Lama. Koch said Steinmeier was at risk of giving China the impression that Germany wasn't that bothered about human rights. "Giving such an impression would be fatal," Koch told Welt am Sonntag newspaper.

Merkel's meeting with the Dalai Lama in September led to a diplomatic rift with China, which warned that the meeting would have "long-lasting effects" on relations between the two countries. Steinmeier, who is also deputy chancellor, accused Merkel of engaging in "shop window" politics which would undermine Germany's subtle efforts to encourage China to improve human rights.

"The Dalai Lama is coming to Germany on Friday on a four-day trip. And it seems no one factored this long-announced visit into their schedules. The chancellor is in Latin America, the president hasn't got a free spot in his calendar and Deputy Chancellor Steinmeier isn't available for a meeting with the Nobel Peace Prize Laureate."

"It's not exactly a signal of strength the German government is sending to China this week. It shows neither self-confidence nor courage. Instead of seizing the chance so close to the Olympic Games to bolster the Tibetan spiritual leader, the government is ducking its head. The Dalai Lama himself seems to have shrugged off the affront."

"When Angela Merkel personally received the Dalai Lama in the German capital in September 2007, she took a courageous step. The echo of Chinese howls of anger has long since passed. Now, in view of the unrest in Tibet, such a step would be much more important. And it would have had much more effect given the strong interest China has in a smooth start to the Olympic Games. It's a shame no member of the government has the backbone to take that step."

"The Dalai Lama has been in Germany half a dozen times without being received by a government minister or the chancellor -- and without a domestic political argument erupting about it. And it can't be the government's duty in the future either to arrange an official meeting each time the Tibetan spiritual leader visits his many admirers and supporters in Germany."

"In its dealings with China, Germany is largely throwing its weight behind the Chinese government and is being mealy-mouthed as a result."

"Steinmeier and Köhler appear to fear that meeting the spiritual leader of Tibet will cause the Chinese dragon to spout fire. And they may be right. But Steinmeier's misgivings go a bit too far. He avoids making any symbolic gestures related to human rights because he firmly believes that it's better to engage in silent diplomacy. But sometimes it's necessary to make such gestures in order to be able to look in the mirror without shame in the evening. Besides, realpolitik can be combined with symbolic gestures."