It has been billed in the past as a way to further the integration of Germany's around 4 million Muslims. But a meeting of the national conference on Islam in Germany ended Tuesday with the country's new interior minister in the hot seat and an opposition party calling for a future boycott.

Hans-Peter Friedrich, of the conservative Christian Social Union (CSU), made headlines earlier this month when, after assuming the position of interior minister in a cabinet shakeup, he said during his first press conference: "That Islam is part of Germany is a fact that cannot be proven by history." The comment, an apparent rebuke of statements made by German President Christian Wulff last fall, immediately provoked ire in the Muslim community.

At the Islam Conference in Berlin Tuesday, Friedrich ruffled feathers when he called for a "security partnership" between Muslim groups and German security agencies. The move was apparently a response to a recent attack on US Air Force personnel at Frankfurt Airport, which left two dead and two seriously wounded. The attack was allegedly carried out by a Kosovar Albanian living in Germany.

In a statement issued Tuesday by the Interior Ministry, Friedrich said: "We want, together with the Muslims, to make it clear to the general public that we are taking a stance against Islamic extremism and in favor of more security, within the framework of a security partnership."

Aydan Özoguz, a member of the Bundestag for the opposition center-left Social Democrats (SPD), said Tuesday that Muslims should not take part in the conference until another host is at its helm. Guntram Schneider, the SPD integration minister for the state of North Rhine-Westphalia, told the newspaper Rheinischen Post that "one should not mix security issues with religious questions. The attack in Frankfurt and the Islam Conference have nothing to do with one another. That is not appropriate."

But Cem Özdemir, the national co-leader of the Green Party, said the call by the SPD to boycott the Islam Conference was the wrong move. "What we need is a believable fresh start," he said in Berlin Wednesday. Özdemir was the first German of Turkish descent to be elected to the Bundestag, the German parliament, when he won a seat in 1994.

The Islam Conference was founded in 2006 by then-Interior Minister Wolfgang Schäuble, with a goal of giving Muslims in Germany better political integration.

The second phase of the Islam Conference, which began last year, has been billed as being more practical in nature, with the aim of achieving concrete results. Some of the topics under discussion have included Islam as a religious subject in public schools, the prevention of radical forms of Islam, and equal rights between men and women.

Conference participants include representatives from the federal, local, and state governments, as well as from Muslim organizations and various Muslim individuals.

Two conservative Muslim organizations, the Islam Council and the Central Council of Muslims, are no longer taking part in the conference. Former Interior Minister Thomas de Maizière decided that the Islam Council should no longer participate, because of investigations against senior officials of its member organization Milli Görüs. The Central Council of Muslims withdrew from the meeting because of disagreements over who would be participating, and because they believed the problem of "Islamophobia" was not being properly addressed.

On Wednesday, German commentators criticize Friedrich over the new direction of the conference, with some even calling for its abolition.

"Each federal interior minister has his own unique signature. Wolfgang Schäuble founded the Islam Conference in order to give due diligence to the most controversial part of the chancellor's integration policy. Thomas de Maizière ... formulated what the expectations were of the Muslim associations, and accepted their suggestions, offers and demands, though they were less nobly pursued."

"His successor, Friedrich, who will likely also head up future meetings, considers it time not to talk about the integration of Islam and Muslims into everyday life in Germany, but rather to turn German Muslims into responsible citizens. His plan to have a security partnership should, however, be handled separately from former conference topics, so as not to have a negative impact on them."

"The dialogue is difficult enough… In the end, Friedrich must achieve the feat of being fair to Muslims as a community and as individuals. The only question is, how does one do that successfully?"

"When the former Interior Minister Schäuble called for an Islam Conference, it was a wonderful idea. The government was inviting German Muslims to participate in a dialogue, in order to make the society more cohesive. When Schäuble said in the Bundestag that 'Islam is a part of Germany and of Europe, it is a part of our present and of our future,' it had enormous symbolic power. Instead of distrust and denial, there was finally good faith, and with it, an invitation to talk on equal terms. That was a signal that the Islam Conference made sense."

"But with Friedrich that is not the case, because he has chosen the opposite path to Schäuble. Shortly after taking office, he questioned the place of Muslims in Germany. And now he wants, as his first initiative, to develop a security partnership between Muslims and the security agencies, in order to fight Islamism. But such partnerships already exist in many places. More importantly, with Friedrich the good faith with the Muslims is over, and distrust and denial are once again winning the upper hand..."

"With Schäuble the conference made sense -- with Friedrich it does not. The Islam Conference has become superfluous. The Interior Ministry should put an end to it."

"One knows it from football: When a team moves up to the next level, the players and coaches are, at first, literally out of their league. This phenomenon also takes place in politics, and it is currently to be observed with the new interior minister, Hans-Peter Friedrich."

"He has not yet completely made the mental leap from Bavarian politician to federal minister. At one of his first tasks in office, leading the Islam Conference, Friedrich's statements were directed more at the voters at home than to the purpose of the meeting, namely finding a framework for Muslim life in Germany. Friedrich refused to concede that Islam has become a part of Germany, and annoyed the participants so much that his second initiative, the idea of a security partnership, became a bone of contention in the overheated climate of the talks."

"It is not appropriate for an interior minister to encourage willful disagreement in such a way. In his office, Friedrich is not only the top defender of domestic security, but also of peace within society. An interior minister should at times be just as diplomatic as a foreign minister."

"All of Germany is permanently taking part in a conference on Islam. Few other issues in the country are discussed in such a passionate, thorough, and opinionated way, as the question of how to coexist with around 4 million Muslims, about half of whom have German citizenship…"

"Obviously, (the debate over) Islam in Germany reflects our own identity crisis. Whether one is progressive and tolerant, or Christian and conservative, one's attitude towards Islam reveals a lot about ourselves..."

"In the past, the $64,000-dollar question in Germany, which served to separate the good guys from the bad, was: 'Was Auschwitz unique?' Today, it is: 'Is Islam part of Germany?' But when all of Germany is turned into a permanent Islam Conference, why do we need that institution?"

"The Muslims living in Germany are a heterogeneous group. The only thing they have in common is their faith. But as the lowest common denominator, that is not enough. In a widely secular country, a devout Christian is today often closer ideologically to a devout Muslim than a devout Muslim is to a non-devout Muslim. No institutionalized Islam Conference can reflect such realities and make them constructive. After five years, the realization has come that the German Islam Conference needs to be abolished." 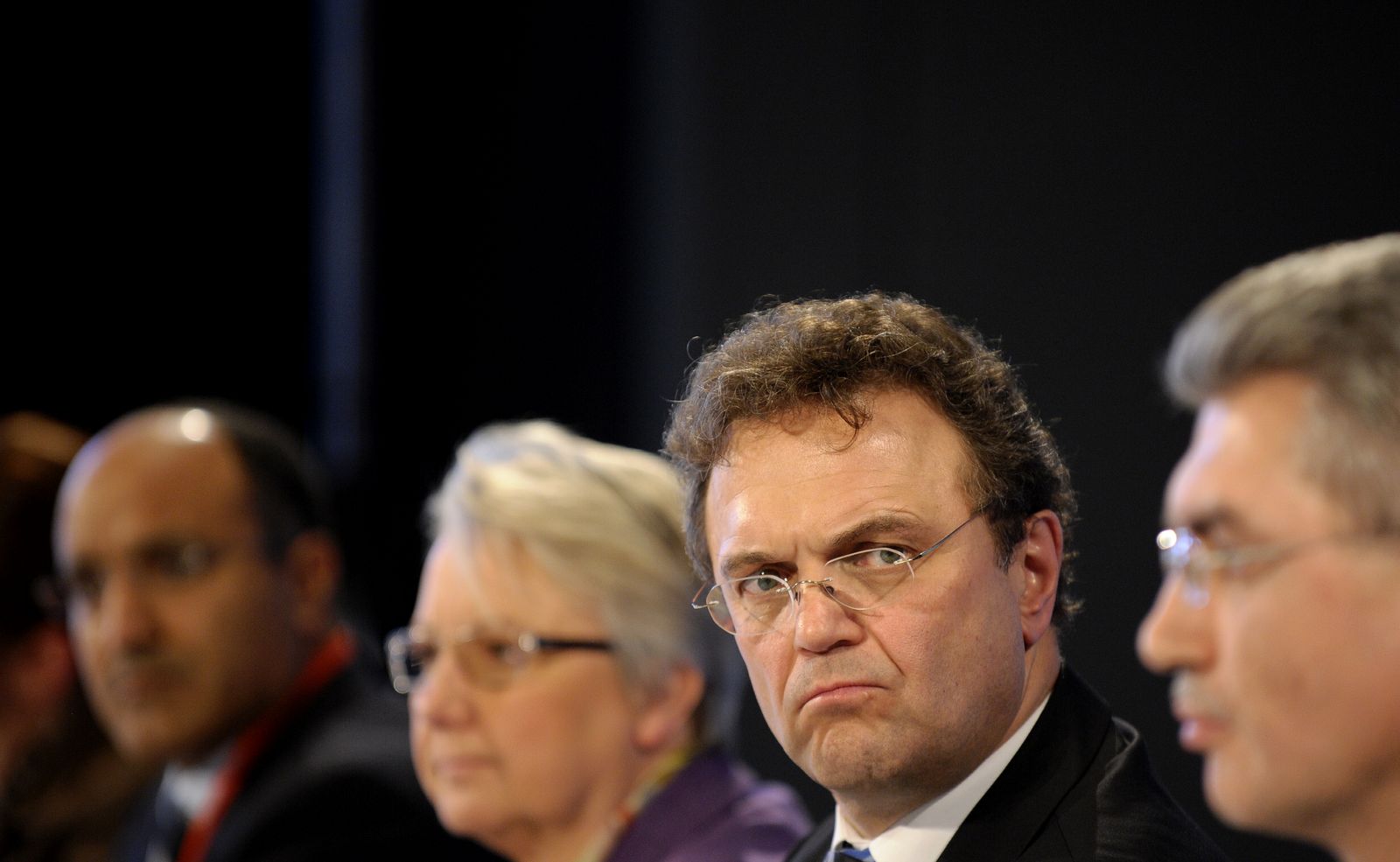 New Interior Minister Hans-Peter Friedrich (second from right) led a meeting of the German Islam Conference for the first time this week.