The arrest of two men in Berlin accused of stockpiling chemicals which could be used to build a bomb was a timely reminder of how the global threat presented by terrorism has yet to wane, as the world gears up to mark the 10th anniversary of the 9/11 atrocities. The pair, a 24-year-old German citizen of Lebanese descent and a 28-year-old stateless Palestinian, were detained on Thursday. They are due in court on Friday, when a judge must decide whether there is enough evidence to remand them in custody.

Police arrested them in an operation involving 230 officers, which saw two apartments searched along with a Muslim cultural center in Berlin's Wedding district, although officials were at pains to insist the latter had no links to extremism. "The Islamic culture center is not under suspicion in this investigation," police spokesman Thomas Neuendorf told broadcaster N24, explaining that the two suspects were simply known to have spent time there.

The men had reportedly assembled large quantities of chemicals including cooling elements and acids used in the agriculture industry. Police were first tipped off by chemical suppliers, who were suspicious of the large amounts being ordered.

With the 10th anniversary of the Sept. 11 attacks this coming Sunday, the arrests have reignited the debate over terror laws in Germany. Chancellor Angela Merkel told broadcaster RTL that, a decade on from 9/11, there was still a long way to go in the fight against terrorism: "We have a latent danger of terrorism. It has become the major new threat, and the global community needs to continue to work together to learn how to finally meet this threat." Merkel also defended the tightening of security laws in Germany since 2001, insisting it was necessary to "ensure the high standard of liberal life for the large majority of people."

German commentators Friday were quick to praise the authorities in Berlin for preventing an attack, and insisted that draconian new anti-terror laws were not necessary -- even if, they say, citizens also have a duty to remain vigilant.

"Today, our security forces are smarter and savvier than they were back then (before 9/11). But unlike America, which was shocked to the core and which has only recently managed to achieve emotional closure with the death of Osama bin Laden, European societies were more stable. They were able to maintain a balance between security and freedoms, even though there were horrific attacks with many dead in different countries. Germany's security forces are remarkably efficient and go about their preventative work quietly."

"In addition, this success also implies a large degree of mindfulness and clear-sightedness on the part of the citizens. Many attacks have been thwarted with their help, including this latest in the capital. One should be thankful when such things work smoothly, especially in these times, in which so much is lamented about indifference and the lack of social cohesion."

"No one wants a society of fear. And so all the prophecies of doom in the face of the debate about violent, ideological Islamism and the question of the commitment of Muslims to German society and democracy, have not poisoned the social climate, but refined and liberated it."

"It was not the case that Berlin escaped a terrorist attack with potentially horrific consequences merely by a hair's breadth. In light of all the excitement over the arrest of two terror suspects, this realization should not be overlooked."

"Secondly, the events in Berlin show that, 10 years after the terrorist attacks of Sept. 11, there are still apparently individuals in our country willing to build explosives and perpetrate terrorist attacks ... in the name of some completely perverted understanding of Islam."

"Thirdly, Berlin provides striking proof that there is no cause for fearmongering by babbling about alleged gaps in security, demanding new, ever more far-reaching powers for police and prosecutors or propagating general suspicion of Islam. The police did well not to exploit these arrests for a renewed debate about security laws. This should teach us that the laws already in place are sufficient."

"Most attacks by Islamists in Germany so far have failed -- and, unlike the current case in Berlin, that was not always thanks to the investigators. The explosives used by the Cologne suitcase bombers failed to kill any train passengers because they were amateurishly built."

"Of course, the security forces are facing a dilemma. Since 2009, even preparing for a serious violent crime is liable to prosecution. This makes early intervention possible, even if evidence of a planned terrorist attack is not yet on the table. But if the police use this opportunity, as in this case, they run the risk that a judge will set the suspects free again."

"Only tip-offs from suppliers who had become suspicious set the police in motion this time. Anti-terror laws are obviously not enough on their own to uncover suspects. That requires the attentiveness of citizens not to simply ignore the strange behavior."

"The long list of thwarted terrorist attacks in Germany should not lead to the wrong conclusions. Nobody can be sure that future attacks can be prevented. People can react very differently to the danger. Be vigilant without being hysterical; this is probably the attitude with which you can best tolerate uncertainty without sacrificing your own freedom."

"The fact Germany has -- yet again -- been saved from its first major Islamist terror attack is thanks to the mindfulness of two businessmen, who alerted the authorities to their suspicion over the dangerous chemicals. Vigilance is the price of security and freedom. This is not simply a challenge for the intelligence community, but for citizens as well. Some in Germany still refuse to admit it or have repressed the fact that America, Britain and Israel are not alone -- we Germans, too, are in the crosshairs of jihad warriors. Their commander-in-chief is dead and al-Qaida has been dealt a considerable blow. But individual fighters, acting independently, took the 'war against infidels' upon themselves long ago, making defense that much more difficult."

"Caution and good fortune have until now kept Germany from becoming the bloody site of an Islamist extremist attack. Despite all the successes, this remains troubling. The cynicism once trumpeted by the underground Provisional Irish Republican Army still rings true for Islamist fighters: 'We only have to be lucky once. You will have to be lucky always.'"

"Three days before Sept. 11, it seems likely that those arrested planned to celebrate the 10th anniversary of the terrorist attacks on New York and Washington in a terrible way. The police have so far found no evidence of this, but they harbor no doubts that these men wanted to carry out a terrorist act. If this is correct, then the arrests in Berlin confirm two things: first, that Germany is still threatened by Islamic terrorism. Second, that the vigilance of the German security authorities remained high even after Osama bin Laden's killing. An abatement would be fatal. Al-Qaida has been decapitated, its structures largely destroyed. But the seeds of hatred sown by its founder continue to find fertile soil, in Europe as well." 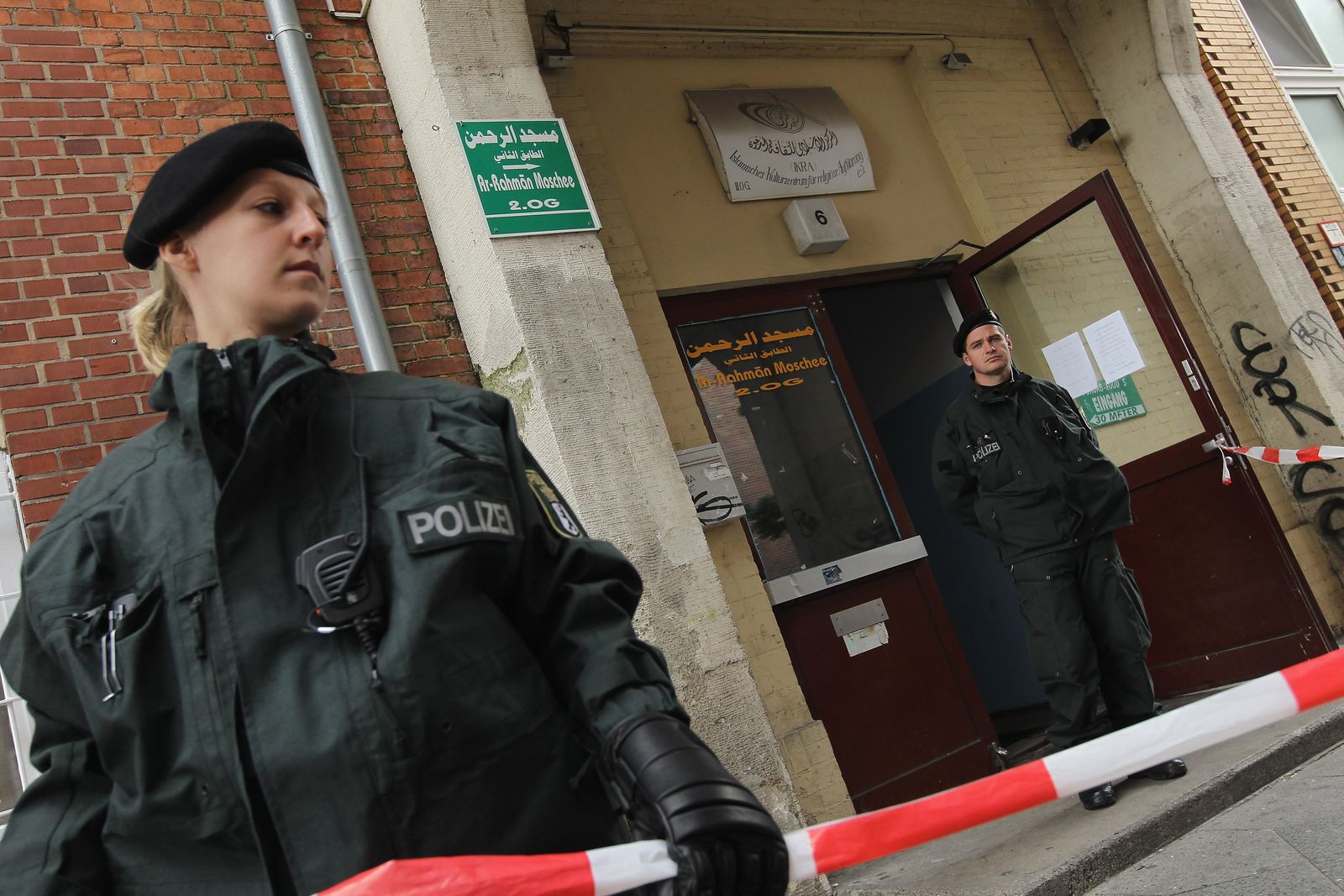 Police officers outside an Islamic cultural center in Berlin following the arrest of two terror suspects.