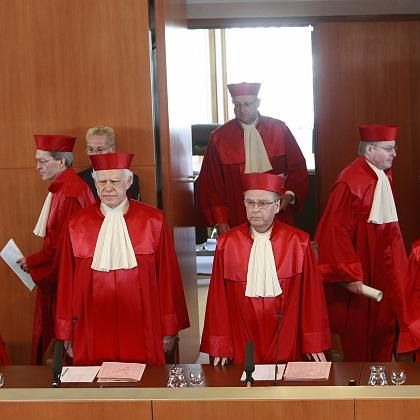 Justices in the constitutional court changed the course of German law on Wednesday.

A verdict by Germany's highest court this week on the controversial question as to whether the government has the right to sift remotely through a citizen's hard drive has not only pointed the way for an upcoming federal law. It has done nothing less than establish a new "fundamental right" for the 21st century, according to German observers. Now that the court has spoken, lawmakers and police have some idea of where a person's "private sphere" starts and ends -- even if the suspect is surfing a wireless connection, outdoors, on a laptop.

Until now, the legal status of a person's hard-drive data while doing something so harmless was incredibly vague. The new verdict sets guidelines for how far the government can intrude in Germany. And it establishes a civil right that may not be so clearly defined anywhere else in the world.

The German Constitutional Court ruled Wednesday that a surveillance law passed in 2007 in the state of North Rhine-Westphalia gave police and state officials too much power to spy on citizens using "trojan horse" software, which can be delivered by e-mail and used to scan the contents of a hard drive.

Not only did the law violate the right to privacy, the court said, but it also violated a basic right for a citizen using a computer with an Internet connection to "a guarantee of confidentiality and integrity in information-technology systems."

This was the full name of the latest civil right, which court president Hans-Jürgen Papier admitted was unprecedented in German law. He also named a few exceptions: In cases of a concrete threat to "life and limb or personal liberty," or the existence of state institutions -- a loophole for terrorism investigations -- authorities can apply for a warrant to snoop a hard drive.

But Gerhart Baum, a former federal Interior Minister who led the challenge to the law in North Rhine-Westphalia, said the justices had forged "a wonderful new basic right  The constitutional court has arrived in the information age."

"In a single blow, the justices have adapted German Basic Law to the demands of modern information technology. An existing right to freedom in telecommunications was too narrow; legal protections surrounding a private home included home computers but not laptops carried in public, electronic organizers or mobile phones. The right to 'protection of the private sphere' and 'informational self-determination' (covering information offered by citizens in a census) have protected computer users so far, but insufficiently. So the verdict in the online-surveillance case has created a whole new basic right  In shorthand (it might be called) the 'IT right.'"

"The constitutional court has created a new right for the second time in the history of postwar Germany. The first, in a debate over census-gathering 25 years ago, established the right to 'informational self-determination.' The new one has an even more complicated name  It allows some online surveillance by the government, but only under strict conditions. They should have been much stricter."

"Interior Minister Wolfgang Schäuble will have to re-draft part of a proposed federal law to allow online surveillance. The paragraph he has formulated (in a bill now headed for parliament) to give the German government electronic spying powers is unconstitutional in its current form."

"The birth certificate of this new right is 106 pages long, and the justices keep repeating the long name as if they want to drum it into German political consciousness. They've also torn the state law from North Rhine-Westphalia to shreds. This was the first such law in Germany. Nothing of it remains. It was a brutally graphic example of the constitutional clumsiness of our lawmakers in the area of Internet security. It should serve as a warning to be more careful."

"The verdict is certainly a 'milestone in legal history for freedom and civil rights'  The problem is that the road to this milestone is pocked with other milestones that point in the other direction  (A number of laws) have been established on the supposed growing danger to domestic security, and they've all been found unconstitutional, in whole or in part, because of their massive erosion of civil liberties."

"The verdict over online surveillance should be ranked with these other decisions. It can be read as a protest against lawmakers who have allowed their hand to be guided for too long by terrorists."

"This new basic right has aspects that mark a departure from German Basic Law. The hurdles for a preventative search of a computer (using spyware) are higher than before. But for computers sitting at home, some tight restrictions have now been removed from the (traditional) 'sanctity of the private sphere.'"

"This goes too far. The court's job is to interpret and protect the fundamental rights contained in the constitution, not to invent new ones."

"For lawmakers it's a disgrace when the court has to pronounce a new fundamental right. Changes and important modernizations of the constitution should be the duty of an elected legislature. But experience teaches that this legislative process normally fails to write law that isn't overgrown with language expressing petty political battles and debates over details. Many lawyers will therefore be grateful for the clear guidelines."

"Thanks to the legal art of the constitutional court, the online surveillance powers awaited by state and federal lawmakers with wringing hands will now be done away with. The negative part is that the politicians, once again, have not taken law-making as their main job -- instead they waited for assistance from the bench  When people complain, again, that the Constitutional Court gets too involved in German politics, this verdict will be remembered."