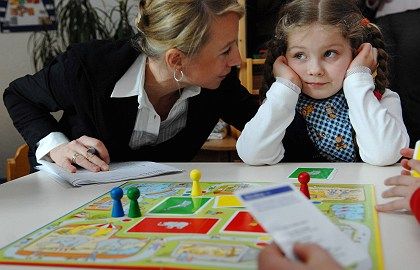 Germany may have produced some of the greatest thinkers of all time, but it doesn't look like there will be many Goethes or Einsteins coming out of its school system any time soon, if a new United Nations report is to be believed.

Vernor Muñoz Villalobos, the UN's Special Rapporteur on the right to education, issued a report card on the German school system at the Human Rights Council in Geneva Wednesday. His verdict? Germany needs to try a little harder.

Villalobos, who visited Germany last year, was critical of the streaming system used in German schools, where pupils are divided up according to ability after just four years of school and sent to three different kinds of high school, depending on ability. "I believe that the tiered system and the way children are streamed emphasize social inequality," he said.

In particular, he warned of the dangers of social exclusion resulting from the system. Children from low income backgrounds, children of immigrants and disabled children are especially at a disadvantage, he said.

The new criticism of Germany's school system comes after the country's disappointing performance in the 2003 PISA study, conducted by the Organization for Economic Cooperation and Development (OECD), which compares academic performance in different countries. The poor PISA results came as something of a shock to Germans, many of whom felt their country had an enviable educational tradition.

Commentators writing in Germany's newspapers Thursday were divided between praising Villalobos' report and reacting huffily to the criticism. Some even suggested that Villalobos, as a Costa Rican, wasn't qualified to judge the German system.

"Which other country possesses such low self-confidence that it lets a professor from Costa Rica, who is hardly able to speak German, read it the riot act? In France at any rate this emissary would be treated with contempt -- and rightly so."

"The important thing is to further develop educational support in early childhood, to even out the differences in starting points of children beginning school. One thing that is needed is the systematic language instruction of foreign children, in pre-school institutions and with the support of their parents. Maybe the special rapporteur could provide some productive suggestions in that respect. But after this cliché-filled report we cannot count on that."

"A completely neutral source has now officially certified in Geneva a fact that our school minister loves to dispute: that there is not just a little problem with the distribution of responsibilities to the schools, but there is a real violation of human rights. ... Young people are refused the right to learn, just because they come from another country."

"Villalobos' opinion that Germany needs to re-think the early streaming of its pupils has long been common knowledge. ... This is good news -- the times in which we still had to argue about the disadvantages of elite schools are past. Today the issue is to think about how to make teaching methods more intelligent -- and to fight together for better infrastructure and equipment for schools."

"The better schools need more and better teachers. They certainly don't need more research -- there has already been enough of that in Germany. There is not much new to say about which education methods are right or wrong. ... How about one or two state education ministers spend the money that they save on education research on education instead -- and send a few professors to the schools?"

"The Costa Rican (Villalobos) was only in Germany for a few days during his visit last year and he didn't understand our complex educational system at all, claim critics. They are behaving exactly like despots who respond to criticisms by UN election observers by saying they didn't understand the complex electoral systems of their country."

"International experts are amazed when they see that teachers here are expected to divide up children -- after only four years of school -- into gifted and ungifted, into fast and slow, and into future manual laborers and future scientists. Naturally no one would accept a three-class system of voting rights, but the three-tier school system is defended by conservative politicians as if it were something sacred.

"Apart from Austria, there is no other country in which opportunities are divided up so early and so rigidly as in Germany. The system is a refuge for the privileged, who are afraid of the urchins from the underclass. It is a relic from the time when societies divided people into the three estates. It is an anachronism."