Is Germany's Social Democratic Party (SPD) ripe for a comeback? That is the question many observers are asking following the center-left party's victory in Sunday's state election in the northeastern German state of Mecklenburg-Western Pomerania.

With 35.7 percent of the vote, an increase of 5.5 percentage points over the last election in 2006, the SPD emerged as the clear winner.

The woes of Angela Merkel's conservative Christian Democratic Union (CDU) on the national level were reflected in their poor showing in the state, where they got their worst result in the post-reunification era. Their support fell by 5.7 percent compared with the last state election in 2006, giving them just 23.1 percent of the vote. They look set to continue as junior partners in the current "grand coalition" with the SPD, however. 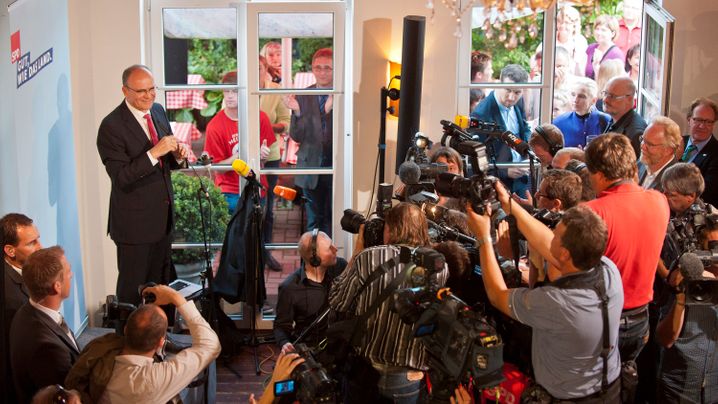 The CDU's current coalition partner on the national level, the business-friendly Free Democratic Party (FDP), did even worse. They only got 2.7 percent, meaning they will no longer have any seats in the state parliament, having failed to reach the 5 percent hurdle necessary for representation. The poor showing is a reflection of the FDP's tribulations on the national level, where they are under fire over their perceived poor record in government.

The far-right National Democratic Party (NPD) did much better than the FDP, winning 6.0 percent of the vote, despite a spirited political campaign against the extremists in the state. That was down from 7.3 percent in 2006 but still enough to remain in the state parliament. The NPD has been described by the German domestic intelligence agency in the past as being a "racist, anti-Semitic, revisionist" party bent on removing democracy and forming a Fourth Reich. It currently holds seats in parliament in the eastern German states of Mecklenburg-Western Pomerania and Saxony.

The election result will give hope to the SPD that they may be ready for a comeback on the national level, following their dismal showing in the 2009 general election. The triumph in Mecklenburg-Western Pomerania comes a few months after an election victory in the city-state of Hamburg and a series of respectable results in other state elections. The center-left party is also leading in the polls for the Sept. 18 state election in Berlin, where Klaus Wowereit looks set to win reelection as mayor of the city-state.

Reacting to Sunday's victory, Sigmar Gabriel, the leader of the national SPD, said that the party was experiencing a "tailwind" that would help it in the upcoming Berlin election and in general. The party had completed an "excellent course" since the 2009 national election, he said at a press conference in Berlin on Monday. Gabriel emphasized that the SPD had become part of the respective state government after each of the preceding seven state elections, and that all the incumbent SPD state governors had won reelection. "Other parties can't say the same," he said.

On Monday, German commentators take a look at the broader significance of the Mecklenburg-Western Pomerania state election.

"The weakness of the CDU and FDP is becoming ever more dramatic. The center-right parties are becoming increasingly unpopular because of the problems of the national government. They are paralyzed and unable to attack. That has disastrous consequences for state elections."

"Angela Merkel and her FDP co-pilot Philipp Rösler are caught in a vicious circle. With each new state election defeat, the level of nervousness in the government camp increases. That in turns leads to new unrest, new conflict and new chaos. Which in turn feeds the bad mood among the party base, who feel that the next election defeat is inevitable. And so on."

"But the most important message of this election is that the SPD is able to win again. After the success of the party in Hamburg, the SPD has once again clearly increased its share of the vote, even with a relatively uncharismatic candidate such as Erwin Sellering. … The SPD is enjoying a new self-confidence. The once-battered party seems transformed. There are hardly any internal conflicts, and it is ready to fight."

"The SPD will be sure to celebrate this September as the month of their comeback -- even if both Mecklenburg-Western Pomerania and Berlin are safe social-democratic territory. In both states, anything other than a victory would be seen as a continuation of the party's decline over the past decade and interpreted as a signal that the SPD has lost its status as one of Germany's two main parties. The victories of Sellering in Mecklenburg-Western Pomerania and Klaus Wowereit in Berlin could help make up for the crashing defeats of recent years and months, albeit at a fairly low level. But the SPD's growing aura of victory is mainly due to the weakness of their traditional rival the CDU and the infighting within the Left Party in recent months."

"The Social Democrats are back. It is not that long ago that people were predicting the SPD's demise. Their support was being eroded by the ruling Christian Democrats on the right, the Left Party on the left and the hype surrounding the Greens. But now they are celebrating success in one election after another."

"This has little to do with the party's own merits, however. The SPD has failed to come up with any pioneering ideas recently, nor have they presented voters with a genuine political alternative. They have benefited mainly from the weakness of their political opponents. The Christian Democrats under Chancellor Angela Merkel have become disoriented, the Left Party is currently embroiled in a debate over (its position on East Germany history) and leadership crises and the Greens failed to capitalize on their boost in popularity following the Fukushima disaster. Not to mention the dismal state of the FDP."

"Even some Social Democrats would never have believed that the party's state chapters in the east could teach the rest how to win elections. With their victory in Mecklenburg-Western Pomerania, the SPD in the state is ahead of the national trend. Nevertheless, the result looks like a sign that a change in government on the national level is also on the horizon. In the current crisis, the CDU-FDP partnership is losing ground, while the SPD-Green alliance is on the rise. The SPD must therefore now prepare for taking over the reins of government faster than it had expected."

"With an eye to the national government, many people feel that 'grand coalitions' of the CDU and SPD are not the worst thing for their country. If the Germans as a whole are said to have the need for such a consensus, then it especially applies to people in the northeast of the country. In Mecklenburg-Western Pomerania, however, voters have delivered an ambiguous result for the two ruling parties. The SPD under Governor Erwin Sellering has achieved a sensational success, while its junior partner, the CDU, has been significantly undermined."

The center-left Süddeutsche Zeitung takes a look at the NPD's electoral success:

"Outside the state, the Mecklenburg-Western Pomerania election was largely ignored, apart from the anxiously asked question of whether the NPD would win seats in the state parliament again. … Even though that was the only interesting issue in the campaign, one would gladly have done without it. … It would have been a good thing if the party had failed to win any seats. Then it would no longer be able to form a parliamentary group which receives hundreds of thousands of euros each year from the state -- money which it then uses to fight the state."

"But the question of the NPD's representation in the state assembly is important beyond the issue of the distribution of seats in the parliament. What is more relevant is the fact that it has a significant constituency of core voters. … The task of undermining the party's base has not been completed. … It's not enough to have civil-society initiatives such as the 'Stork Heinar' posters that make fun of the Nazis' slogans. Similarly, the decline in unemployment and abundant training opportunities for young people in the state don't seem to be enough to reduce their support. In a society where the NPD can go into a state election campaign with good chances -- in contrast, it should be noted, to the FDP -- something is fundamentally wrong."

"Voter turnout has fallen once again, the Nazis are back in the state assembly -- typical eastern Germany. That is how many people will interpret this election result. But one should stop and think for a minute before raising this routine complaint about the east, which supposedly still does not appreciate the blessings of democracy even after 20 years."

"The voters in Mecklenburg-Western Pomerania did not act in an ignorant fashion. Instead, their voting behavior was appropriate to the circumstances. After all, what was really being voted on this time? The Left Party, Greens and CDU all desperately wanted to form a coalition with the SPD. Only one contentious issue was apparent during the campaign: The Left Party wanted to introduce a minimum wage, the CDU didn't. This was too little to unleash any collective political passion."

"As a result, almost one in two voters stayed home, meaning the NPD was able to narrowly win seats in parliament. But the lesson to be learned is not that one should insult voters. Instead, the moral of the story is the following: If the only exciting question in an election is whether the NPD makes it into the parliament, then something crucial is missing in the rivalry between the democratic parties." 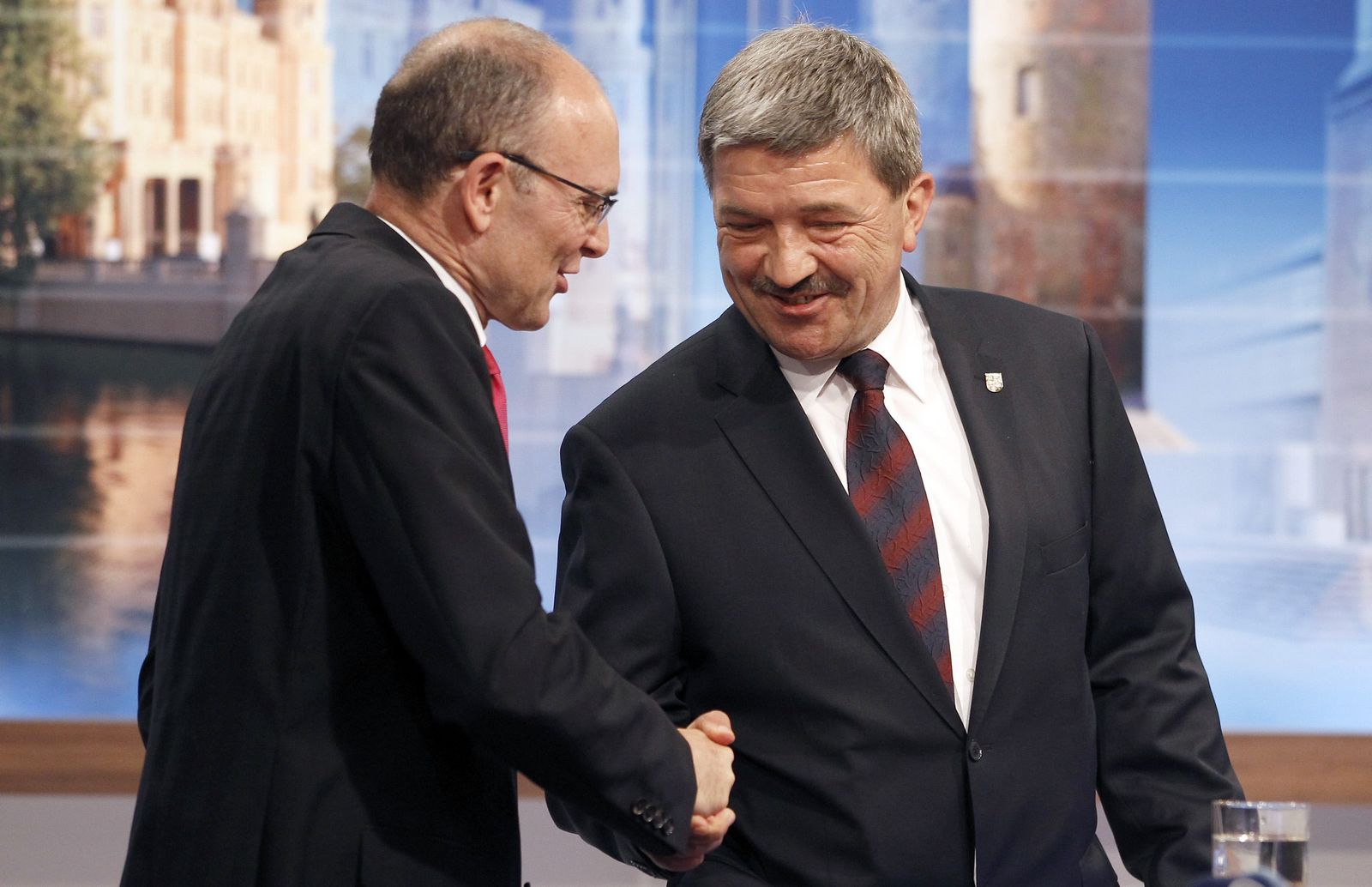