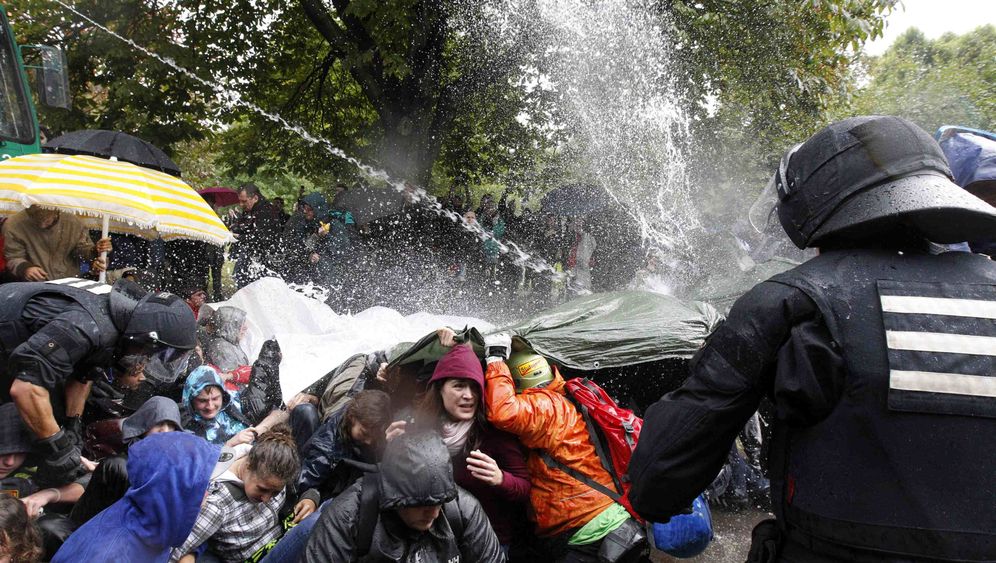 The controversial Stuttgart 21 railway project has been the focus of increasing protests in recent months. But Thursday seemed to mark a turning point as the conflict between the authorities and protesters escalated dramatically.

Around 600 police used water cannon, tear gas, pepper spray and batons in an operation against over 1,000 demonstrators in the southwestern city of Stuttgart on Thursday. The activists had tried to use a sit-down protest to prevent the city's Schlossgarten park from being cleared so that work could begin on felling trees in the park as part of construction work on the new station. Thursday's protests were attended by a broad cross-section of society, including pensioners and children.

The protest's organizers said in a statement that more than 400 protestors had suffered eye irritation as a result of the police's operation, with some suffering from lacerations or broken noses.

The German Red Cross said on Friday morning that 114 demonstrators had been treated on site, and a further 16 were taken to hospitals. Among the injured were school children who had been taking part in an officially registered demonstration.

Images of people bleeding from the eye after being hit by water cannon featured on German television and newspapers Friday. One 22-year-old protestor suffered a serious eye injury after being hit in the right eye by a water cannon jet, a Stuttgart doctor told the news agency DPA, adding that the man might lose his sight in that eye as a result.

The Stuttgart 21 project involves moving the city's main railway station underground and turning it from a terminus into a through station. The project is controversial partly because of its price tag -- it is slated to cost €4.1 billion ($5.38 billion) -- and because of the trees that will be cut down in the Schlossgarten park. There is also criticism that the project does not make sense from a transport point of view, as few main lines go through the city.

There has been a heated reaction to the police's use of force, which was condemned by members of the center-left Social Democrats, Green Party and the far-left Left Party, which are all in opposition on the national level. Jan Korte of the Left Party said that it was not acceptable that that kind of police action was used against pensioners and school students. The Green Party filed a motion to have the issue debated in the German parliament, the Bundestag, on Friday, but it was rejected.

Several politicians criticized Heribert Rech, the interior minister for the state of Baden-Württemberg, where Stuttgart is located, for allowing the operation to go ahead. National Green Party co-leader Cem Özdemir, who is also from the state, said Rech was "confusing Germany with Putin's Russia." It was disproportionate that "pepper gas was sprayed in the eyes of grandmothers and children at close range," he said. "We are in Germany. Such methods do not exist here."

The police have defended their actions. Rainer Wendt, who is the head of one of Germany's main police unions, told the news station N-tv that the police operation had been "not only legal but completely appropriate." He admitted that the pictures in the media "weren't pretty," but added: "That's not the police's job. Its job is to carry out its legal duty."

At a press conference Friday, Baden-Württemberg Governor Stefan Mappus defended the police's actions, saying "I stand behind our officers." He stressed the importance of the Stuttgart 21 project and called for a de-escalation in the conflict. "The images from yesterday cannot be allowed to repeat themselves," he said.

Rech, the Baden-Württemberg interior minister, also defended the police operation, saying that officers had been appalled by the aggression with which they were confronted.

Even German Chancellor Angela Merkel felt obliged to comment on Thursday's events. "I would like it if such demonstrations proceeded peacefully," she told the regional public broadcaster SWR, which broadcasts in the southwest of Germany. "Anything that could lead to violence has to be avoided." She defended the Stuttgart 21 project as sensible and right.

The escalation is likely to cause political problems for the state government, a coalition of Merkel's center-right Christian Democratic Union (CDU) and the business-friendly Free Democratic Union. State elections will be held next March, and the Stuttgart 21 project is already a key campaign issue. The CDU has been in government in Baden-Württemberg for 57 years. If it were to lose the election, it would be a blow to the chancellor and her national government.

Construction work continued on the site on Friday under massive police protection, and the first trees in the park have now been cut down. But the next wave of conflict is not far off: Some 100,000 people are expected to take part in the next mass demonstration, which is planned for Friday evening.

On Friday, German commentators take a look at the police operation, with all agreeing it was disproportionate.

"Every political movement has its critical turning points. For the Stuttgart 21 opponents, this Thursday might have been one of them. The reaction of the activists and the state government will now determine whether the turning point will lead to even more violence and political frustration. Regardless of whether there were reasonable grounds for the brutal police action -- the pictures and eyewitness reports suggest the contrary -- it was extremely unwise politically. Perhaps Baden-Württemberg's government had hoped, with its uncompromising approach, to put a stop to the protests six months before the upcoming state election, to prevent Stuttgart 21 from becoming an issue in the election campaign. This hope, however, will be in vain."

"The battle for Stuttgart 21 is becoming more like a religious war every day. The opponents and supporters of the project are irreconcilable. The two sides are no longer exchanging rational arguments but are engaging in mudslinging. In this kind of atmosphere, a tough approach will only lead to protesters deciding to dig in their heels."

"It's true that the government is right to enforce law and order on its territory. That necessarily includes clearing an area that has been occupied by protesters, for which a building permit has been legally issued. But a democratic state must preserve a sense of moderation and try to protect its citizens as far as is possible. It is debatable whether this happened in Stuttgart."

"Deploying heavily armored riot police against students is reminiscent of the old days and old attitudes which are not exactly popular in Germany's liberal southwest. It is true that the protesters are trying to thwart a planning process that has been going on for 15 years, and thereby overturn the current position, which is legal and legitimate and was reached through democratic means. One can argue that the protesters are coming too late to the debate."

"But even then, the use of state pressure and state force must remain proportionate. Not all the protesters are simply out to cause trouble. There are some among them who believe that the decisions about the project were not reached in a suitably democratic fashion. It is a sign of selfish impatience that they are nevertheless now trying to sabotage the start of construction. It is also a signal of a lack of effective communication when a state-level government believes it needs to resort immediately to force to prevent this kind of sabotage. The negotiations between the protesters and the project officials lasted less than a week, if that."

"Bizzare images and sounds were transmitted live via a mobile webcam out of Stuttgart's Schlossgarten park on Thursday and beamed onto thousands of computer screens all over Germany. At first glance the images seemed familiar from  anti-nuclear protests in the past: Demonstrators sitting in the path of a police vehicle, police emerging dressed in absurdly war-like armour, wanting to clear the way for their colleagues and finally resorting to water cannons to do so. But (the images) didn't fit with what came out of the headphones. Not only were a considerable number of the demonstrators chanting 'Wir sind das Volk' ('We are the people,' a slogan associated with pro-democracy protesters in East Germany) but they also began singing the German national anthem -- further evidence for the presence of a core conservative element in the protest movement. After all, what is at stake is the kind of thing that conservatives like to preserve: almost 300 trees -- some of which are very old -- and a city park threatened with being turned into a construction site.

"The otherwise respectable citizens, who react to water cannons by singing the national anthem, see themselves as legitimate representatives of the nation and are in the process denying this role to those (authorities) who sent police into the park. Germany's conservatives no longer feel represented by local and national government."