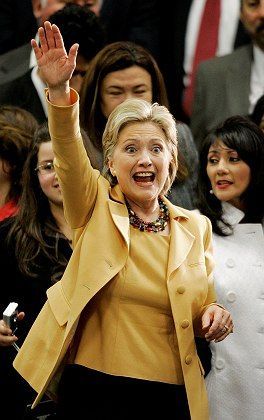 With a string of losses behind her and three weeks until she climbs back in the ring, Hillary Clinton has a lot to worry about.

Rounds one and two in the great Obama-Clinton fight are over now, and Obama is in the lead. Round One -- Super Tuesday -- was scored a draw. This week's Round Two -- with primaries in Virginia, Maryland and Washington, D.C. -- was a win for Obama. What's more, on the scorecard for delegates, Obama appears to have pulled ahead, too, with 1,223 to Clinton's 1,198.

As anyone who saw the Ali-Foreman "Rumble in the Jungle" knows, it ain't over till it's over. But, here's the rub for Hillary: It is three long weeks until March 4, when the big states of Ohio and Texas, with their combined pledged delegate count of 334, go to the primary polls. That is a long time for Clinton to be the person without momentum.

Germans are following this election closely and on Thursday German commentators see things looking good for Obama. This doesn't seem to bother them much, but they fear Hillary won't go down easy and might bruise Obama before the main event: the election. They're also concerned about how Hillary might handle defeat.

"In sports, a series of victories is called a run, and what Senator Obama has right now is without a doubt a run. He has succeeded in winning eight primaries in a row. For Mrs. Clinton, his rival candidate for the Democratic presidential candidate, these are crushing defeats."

"If possible, (Obama's) run will really end in the White House. The thought of a duel between a 46-year-old black Democrat, who is surrounded by the aura of the visionary, and a 71-year-old war hero, whose calling card thus far has been his lack of Republican orthodoxy, is fascinating. And it's not so far away. But Obama will also be very carefully examined before then."

"The New York Times has written that 'firstness' should not be taken as a political argument for either Clinton or Obama. But that is wrong. 'Firstness' is an argument. Seen from the perspective of US history, an Obama presidency would be even more remarkable than that of Hillary Clinton. When Obama was a child, several states still had racial segregation. Indeed, America, the world's oldest constitutional democracy, was still the last Western nation to outlaw slavery. A vote for Obama could hardly be overestimated as a symbol of change."

"The candidate and his advisors know this. More than anything, Obama's speeches are invocations of unity...His rhetoric of unity is particularly effective because Bush has made the country so divided and gloomy."

"Hillary Clinton has not done enough to counter these feelings as they relate to politics. The Clinton camp accuses Obama of not being concrete and having too little experience. But that's not what this is about, not with this particular election and not at all during this primary season. The Obama 'feeling' is a stronger argument that the Clinton 'experience.' With that being the case, it's not just American Democrats who have a special dream for a special election year: President Obama with a Vice President Clinton. So much change, so much 'firstness,' such a different America."

"Hillary Clinton suspected that she would lose these primaries. And she didn't consider the votes in Virginia, Maryland and Washington, D.C., decisive in the race for the Democratic presidential nomination. For that reason, she hardly campaigned there at all. That was a mistake."

"Relatively speaking, a lot of things point to the fact that the little-followed primaries this week were a decisive turning point in the Democratic race. That would be bitter for Clinton. That is because, apart from the fact that she underappreciated the value of those votes, she has hardly made any mistakes lately. She abandoned her barbed attacks on Obama and presented herself as being more competent than him on pertinent issues, especially as relates to the economy."

"Just under three weeks remain before election day in Texas and Ohio. And only Wisconsin and Hawaii hold votes before then. For Hillary Clinton, those three weeks will be about one thing: staying in the contest. The underdog's name is no longer Barack Obama."

"It's still too early to write off Hillary Clinton politically. But she has never been closer to political failure than she is now, at least not since health care reform...failed in the US Congress. Above all, public opinion has turned against her. Hillary is fighting against a mix of schadenfreude, conservative Clinton-bashing, misogyny and the media's desire to see her rival Barack Obama win."

"There is still a realistic chance, in fact, that she can still change course with landslide victories in Ohio and Texas on March 4. But that's probably not going to happen. If she doesn't manage it, there is no more politically legitimate chance for her to secure the nomination. Then she could do herself and her party a huge favor: concede defeat very quickly. Now that would be a real surprise."