When German Defense Minister Karl-Theodor zu Guttenberg announced earlier this week that he would no longer use his doctor title in the wake of a plagiarism scandal involving his Ph.D. dissertation, his supporters hoped that the popular politician and possible future chancellor candidate could put the problem behind him and move on.

But a website devoted to studying his past work has found another publication which it says contains passages lifted from other sources with minimal changes and no attribution. And a telephone survey conducted by the powerful mass circulation German newspaper Bild, which showed overwhelming support for Guttenberg to remain in office, has been criticized as being skewed in favor of the 39-year-old politician.

It is a topic that had dominated German headlines for days and been at the tips of people's tongues at office water coolers: What will become of Guttenberg?

After newspaper reports found a rapidly growing number of cases in his dissertation where material appeared to be lifted from other sources without proper attribution, Guttenberg announced he would no longer use his doctor title. The University of Bayreuth, which awarded Guttenberg the Ph.D. in 2006, formally withdrew it on Wednesday. On Friday, news broke that his invitation to speak at a May gathering of law school alumni at the university had been withdrawn.

At issue is a 475-page dissertation on the US and EU constitutions, which Guttenberg said took about seven years to complete, and which received top marks from the Bavarian university. A website devoted to examining it claims to have found 286 pages with plagiarized material.

The GuttenPlag Wiki website also found a 29-page analysis from 2004 that Guttenberg, then a representative in the German parliament, wrote for the Hanns Seidel Foundation. According to the site, the document contains passages that have been taken from other sources with minimal changes and not attributed. A spokesperson from Guttenberg's legislative office told SPIEGEL ONLINE that the case involved an "editorial text" and not an academic one, and pointed out that the sources were all listed in an attached literature review.

Meanwhile, Bild published a survey Thursday in which 87 percent of the respondents said they believed Guttenberg should stay in office. More than 260,000 people called and faxed in to the toll line. The headline on the newspaper's front page Thursday was "Yes, we stand behind Guttenberg!" However, on Friday, an ongoing online poll on the newspaper's website found that 57 percent of the more than 680,000 surveyed wanted Guttenberg to step down.

Jürgen Trittin, floor leader of the Green Party, on Thursday spoke of a "dirty deal" between Guttenberg and Axel Springer AG, which owns Bild. It was announced this week that the newspaper will be a major recipient of new advertising that the government is planning to help with recruitment for the German military, the Bundeswehr, which is soon to become a volunteer army. A spokesman for the media company told SPIEGEL ONLINE this week that the editorial offices only learned of the advertising campaign from the media on Thursday, after the telephone poll.

Critics also pointed out that the tabloid in the past also defended Guttenberg's controversial trip to Afghanistan in December with his wife Stephanie, which was decried as a publicity stunt by his opponents.

German commentators on Friday examined the country's fascination with the case of Guttenberg, and looked at what his story means for German higher education.

"We are energized and emotional like rarely before. Have you, too, also passionately discussed politics for the first time in a long time with your friends and colleagues?"

"Guttenberg was, and is, a bourgeois hero. He is, and has, everything that most people would want to be, or have. He is good looking, has money, is educated, is not divorced, has a wife and two blonde daughters -- with these privileged circumstances he climbed out of the lower levels of politics and devoted himself to a job that is relatively low-paid and insecure."

"Guttenberg matters to all of us. For some, he is a beacon of hope, the next chancellor. For others, he is the bogeyman… In the end, it all revolves around the question: Who will, or who should, rule this country?"

"Never before has a medium so unconditionally created such a good environment for a politician. Bild announced triumphantly that its readers stand behind Guttenberg, and kept secret the fact that in an online poll the majority demanded his expulsion. That has nothing to do with journalism, but a lot to do with campaigns. Bild and Guttenberg have entered into an unprecedented symbiosis. That's why it seems so shady when the Defense Ministry, of all institutions, generously thanked Bild with Bundeswehr advertisements."

"The Guttenberg affair has revealed a kind of moral bankruptcy in the political world. Nowadays, it seems that reader polls by tabloid newspapers decide what is and what isn't legitimate. Politicians who are popular can get away with more. Guttenberg is an idol who floats above the country's institutions. He is young, energetic and independent. The cult surrounding him is the flip side of the general disenchantment with politics and the contempt for the political classes."

"The University of Bayreuth has revoked Karl-Theodor zu Guttenberg's doctorate. But he remains defense minister, at least for the time being. He says he 'did not knowingly deceive.' Anyone who has read his dissertation would not believe that. There are more than 100, possibly several hundred, non-attributed passages taken from authors of other works, many of which are hardly changed from the original.

"In this affair, it is clear what the ruling class really thinks about universities. The governor of the state of Hesse, Volker Bouffier, says that Germany has bigger problems than footnotes -- as if plagiarism were comparable to footnotes. And Chancellor Angela Merkel stated that she had appointed a defense minister, not a research assistant -- as if a cheater and phoney were the same as an assistant."

"Both of them are in agreement with the majority of the population who clearly consider cheating in the academic world to be a pardonable sin -- in contrast to cheating in sports in the form of doping, which in the eyes of the same people should be strictly punished…"

"One cannot declare that education is the most important resource in this country, and at the same time hand over control of qualification standards to populism. One can't simultaneously uphold and condemn scholarship. But it has happened nonetheless. Therein lies the devastation that this affair has left behind." 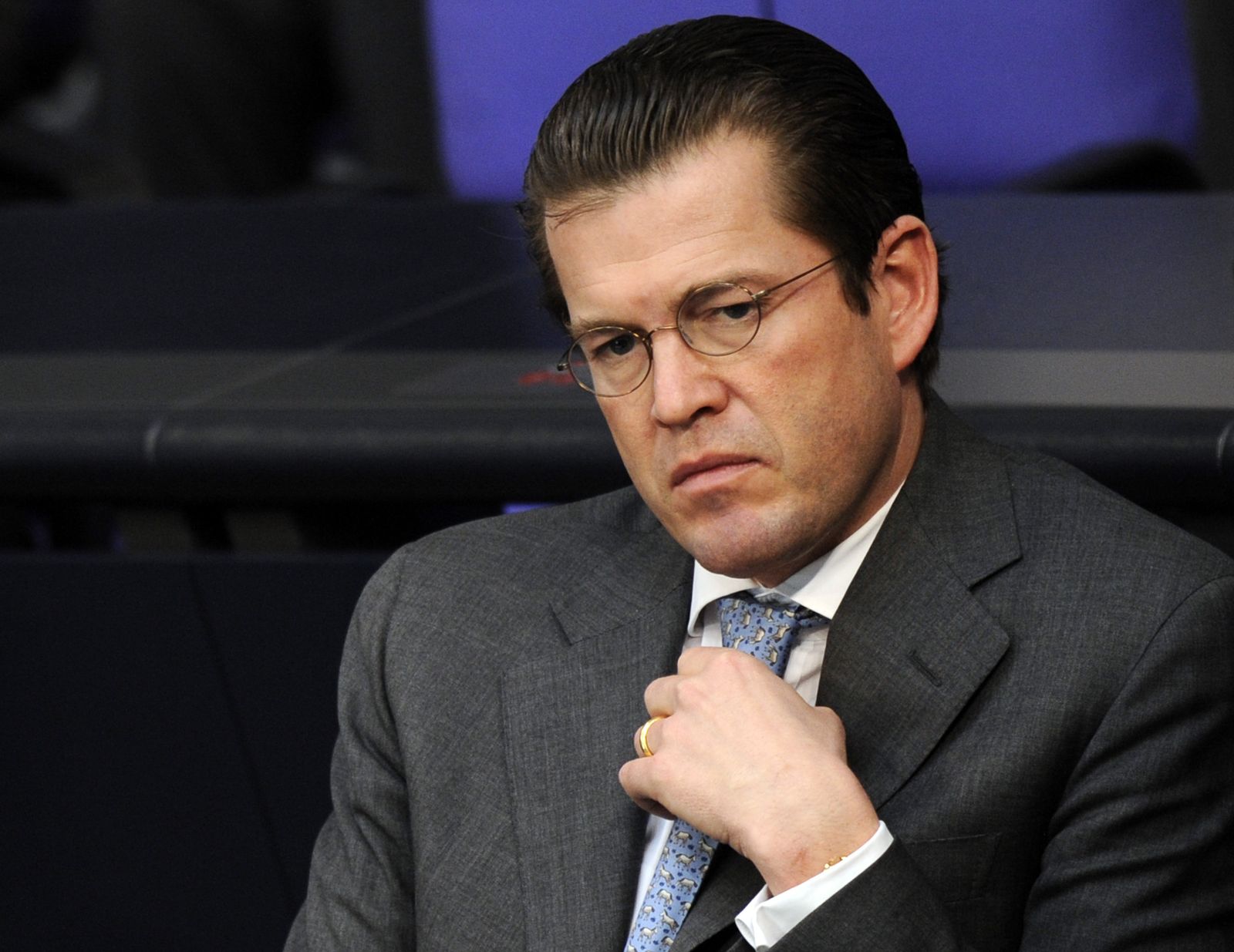 The defense minister is still on the defensive.