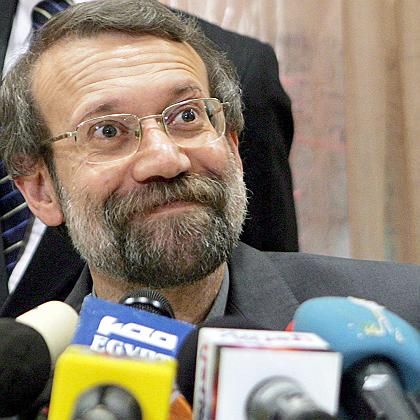 Iran's top nuclear negotiator Ali Larijani has resigned but is still to attend talks with the EU in Rome on Tuesday.

Ali Larijani resigned as Iran's chief nuclear negotiator on Saturday, leading to speculation that Tehran is further hardening its stance in the dispute with the West over its nuclear program. Nevertheless, Larijani is to attend talks in Rome on Tuesday with European Union foreign policy chief Javier Solana.

Larijani was regarded as more pragmatic, if not exactly more moderate, than Iranian President Mahmoud Ahmadinejad. It was an open secret that the two men did not see eye to eye on how best to deal with the West to avoid further economic sanctions. The crunch seemed to come last week when Larijani said proposals on a possible compromise made by Russian President Vladimir Putin were worth considering. He was immediately contradicted by President Ahmadinejad and his resignation quickly followed.

His replacement, Saeed Jalili, a deputy foreign minister, is regarded as a close ally of the president and will be expected to follow a similar hardline position in the stand off with the West.

Iranian Foreign Ministry spokesman Mohammad Ali Hosseini insisted that the new appointment did not signal a new policy and that the pursuit of peaceful nuclear technology was part of Iran's "unchangeable goals." Despite Iranian insistence that it is pursuing a civilian nuclear energy program, the West suspects that the country is secretly trying to develop nuclear weapons.

Despite his resignation, Larijani is to join his successor, Jalili for talks in Rome on Tuesday with Solana. The United Nations is considering further sanctions against Iran but is awaiting reports from Solana and from its nuclear watchdog the International Atomic Energy Agency (IAEA) before making a decision.

In recent months Ahmadinejad has been appointing allies to key posts to shore up his position ahead of parliamentary elections next March and the presidential election in 2009. But he does not have free reign in the mullah regime, where Supreme Leader Ayatollah Ali Khamenei has the last word in all matters of policy. Jalili's appointment would have required Khamenei's approval and thus indicates that the president enjoys his support on the nuclear issue.

German papers on Monday mull over what the appointment means for forthcoming negotiations between Iran and the West.

"As long as Ayatollah Khomeini lived his overwhelming authority ensured that the different political and ideological views were balanced. After his death a power struggle began between the pragmatists, reformers, conservatives and radical Islamists."

"Since the radical Islamist Mahmoud Ahmadinejad took power, this conflict has been carried out openly. He and his followers are attempting to monopolize all the power and to shut out all the other factions. The resignation of Larijani, a radical himself, shows that even this group is beginning to splinter. Larijani's successor Saeed Jalili takes his orders from Ahmedinajad. It is to be expected that during the forthcoming negotiations he will show the same hardline radicalism as the president."

"This entails great danger. The past few weeks have shown how decided the US is on a tough stance against Iran.  There are mounting warnings about a possible world war -- and they seem to be more than mere rhetoric."

"Larijani has offered his resignation repeatedly in recent months. Every time he had succeeded in getting some extensions for Iran in negotiations with the IAEA or with the EU, President Mahmoud Ahmadinejad would throw a spanner in the works with some hardline declaration."

"Now the hopes of finding a compromise in the dispute over the uranium enrichment, which Putin had pointed a way towards, have faded  The choice of a new negotiator points to a hardening of the Iranian position. Saeed Jalili is a close confidant of Ahmadinejad and sticks to his line."

"He is regarded as unbending and extremely forceful when pursuing his goals. He is more a specialist in monologues than dialogues, according to diplomatic circles."

"Larijani is to join Jalili in Rome for the meeting with the EU representative Javier Solana. Obviously Tehran doesnt want to immediately forgo his experience or his good personal relationship with Solana."

"Another former nuclear negotiator, Hassan Rouhani, who was well regarded in the West, recently criticized Ahmadinejad's policies, saying Iran should not keep making new enemies. Larijini understood this. In contrast to the people close to Ahmadinejad, he understood what was possible. Nobody is saying that about his successor Jalili."

"Larijani's departure is not going to make it any easier to get Iran to compromise in the dispute over its nuclear program. The fact that the negotiator has given up the struggle with Ahmadinejad -- one that has been obvious for a long time -- makes the fronts clearer. Obviously the American push to get Moscow to put Tehran under pressure has born fruit. Russia got a whole package of offers from Washington  to make joining the Western anti-nuclear front more palatable. But whatever the Russian president offered in Tehran to persuade the Iranians to a least break off uranium enrichment seems to have only made the desired impression on Larijani. Ahmadinejad had to call him off. Now America and the EU have to deal with people in Tehran who ask them for "respect" and in return show a total lack of respect. For the time being it's about sanctions. And what then? Tehran means business."