Complaining about the weather has become Germany's national sport, at least since late November, when the winter's first snowstorms hit central Europe unseasonably early. Reaction from most German transportation systems, from airports to local streetcars, has been mild panic.

Airports have run out of de-icing fluid, flights have been cancelled or re-routed, long-distance trains delayed. Highways have become impassable, so commuters headed for trams and trains -- and Berlin's S-Bahn commuter trains, for example, promptly slowed down to irregular, 20-minute intervals during rush hour in the German capital.

The Federation of German Chambers of Industry and Commerce (DIHK) predicts that too much of this sort of chaos could harm the German economy to the tune of around €3 billion (almost $4 billion). The group worries that the transportation and construction sectors could lose so much planned business that the nation's economic growth for late 2010 and early 2011 might have to be revised downward.

'Quite a Normal Winter'

Meanwhile a spokeswoman for the main airport in Moscow, which suffered a weekend of heavy snow, says no flights have been disrupted except those bound for Europe. "For us it's not an exceptional situation," said Elena Dalanowa to SPIEGEL ONLINE. "It's quite a normal winter."

Admittedly some systems, like German national railway Deutsche Bahn and the Berlin S-Bahn, are having a strange year. After a number of safety incidents in 2009, all S-Bahn trains were due to have their brakes tested, a process that should have been finished -- but wasn't -- before the snow hit. Likewise, Deutsche Bahn suddenly has cars out of commission for compulsory winter checks, preventing it from meeting a spike in demand.

A few German commentators blame these organizational nightmares on cost-cutting measures by the bureaucracies and corporations involved. Others on Wednesday think Germans have grown so used to everything-on-demand that they can't stand a little ordinary winter grief.

"Was winter better in the past -- in airports, on the road, in train stations? Yes, almost everywhere. But it was also a lot more expensive. It would therefore be too easy to criticize airports, Deutsche Bahn or the freight carriers. In individual cases criticism is justified, but the reason for the current winter chaos has more to do with the high expectations that society places on modern transportation and logistics. A large part of the population wants more merchandise faster, more reliably, and for less money. These demands don't fit together."

"In the airline industry, flights are tightly scheduled so the airlines can turn a profit, and de-icing equipment has been cut back because the expensive machinery otherwise just sits unused for 51 weeks out of the year. That so many flights have been canceled for precisely this reason just a few weeks before Christmas is, of course, awkward. But that's the risk of running a business."

"Trains should be reliable when other forms of transportation fail. But so many workers have been dismissed in the last few years -- and so many trains, lines and control centers retired -- that Deutsche Bahn now has to admit to more delays and disruptions than the public should tolerate. Where money flows, and how much, in the budget needs to be reconsidered, so that next winter will be better."

"Outside observers must be shaking their heads. How can foul weather throw a nation as advanced as Germany so easily off its rhythm? Years ago, even during severe winters, there was never so much chaos."

"(But) no other European nation sees quite so much traffic in merchandise. Since the fall of the Iron Curtain, the growth in transit across Germany has been phenomenal. And everyone, from freight carriers to commuters, have the same goal: They want to be on time."

"So-called 'just-in-time' logistics have infiltrated everyone's life, in fact. It's not just industrial supplies that need to arrive on-the-minute in a factory. Office schedules, more and more, lack time buffers, and private lives are also increasingly tight. Who wants to take the risk that their Christmas presents, bought last-minute on Amazon or eBay, might be delayed somewhere? High mobility now belongs to our lifestyles as well as our economies -- as the volcanic cloud from Iceland last spring demonstrated. While flights were grounded, whole production lines stood still. And the logistical demands of modern living will only grow more complex."

"It's apparent at first glance how sensitive and vulnerable we've become (as a society). Because people fly more often, more flights in the last few days have been cancelled. Because we now feel we have a right to a swift four-hour train ride between Berlin and Frankfurt, we complain about delays. And because we can't remember the hard winters of the 1970s, we resort to the word 'chaos.'"

"The sociologist Norbert Elias, in his book "The Civilizing Process," dealt above all with human control of natural events. People have historically made themselves more and more independent of nature: They've built houses and dikes, made use of wool and fire, invented snowplows and de-icing machines. Progress bestows the advanced West with a self-consciousness that has degenerated into a love of technological productivity." 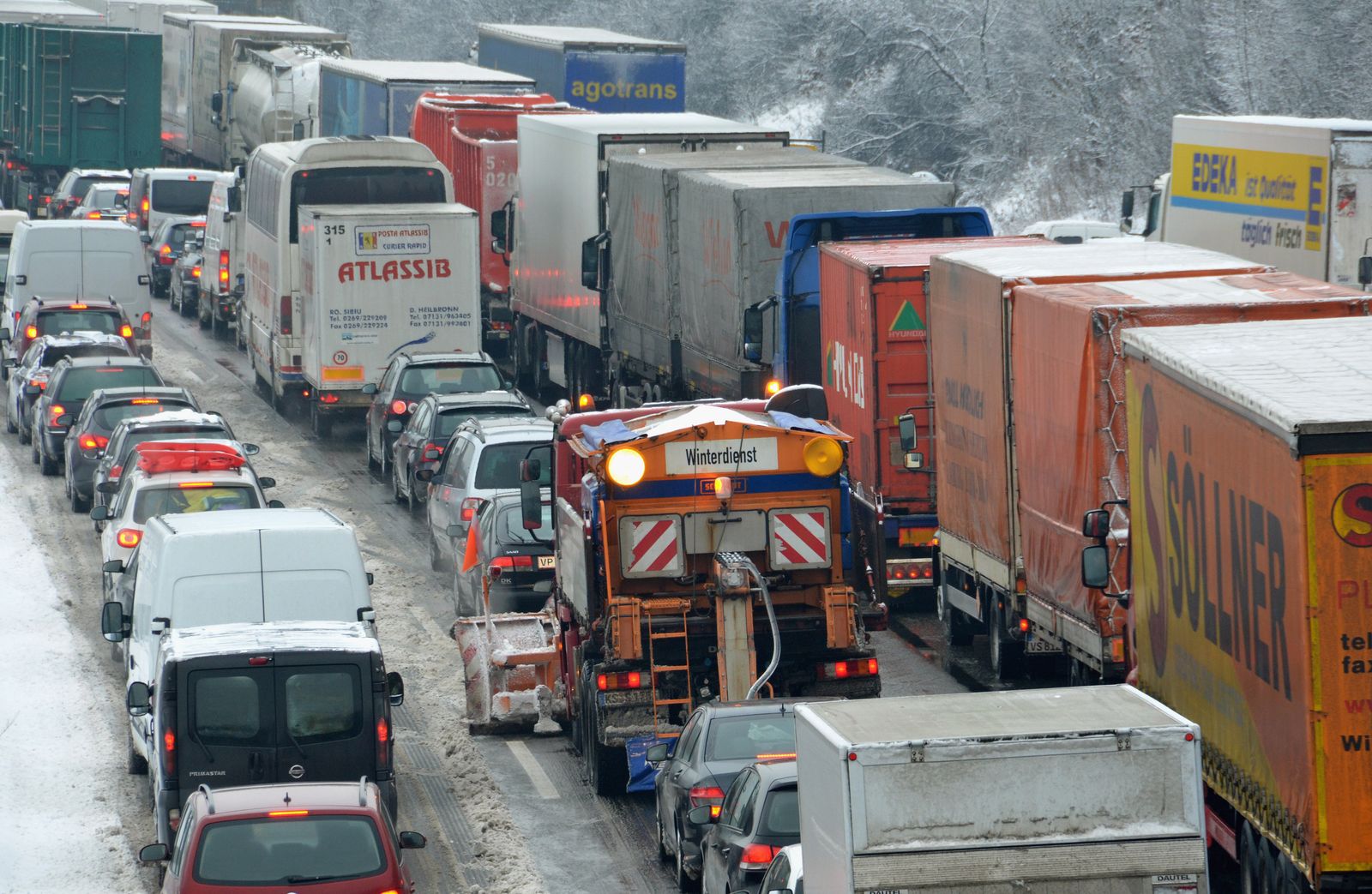 Stuck in the snow.