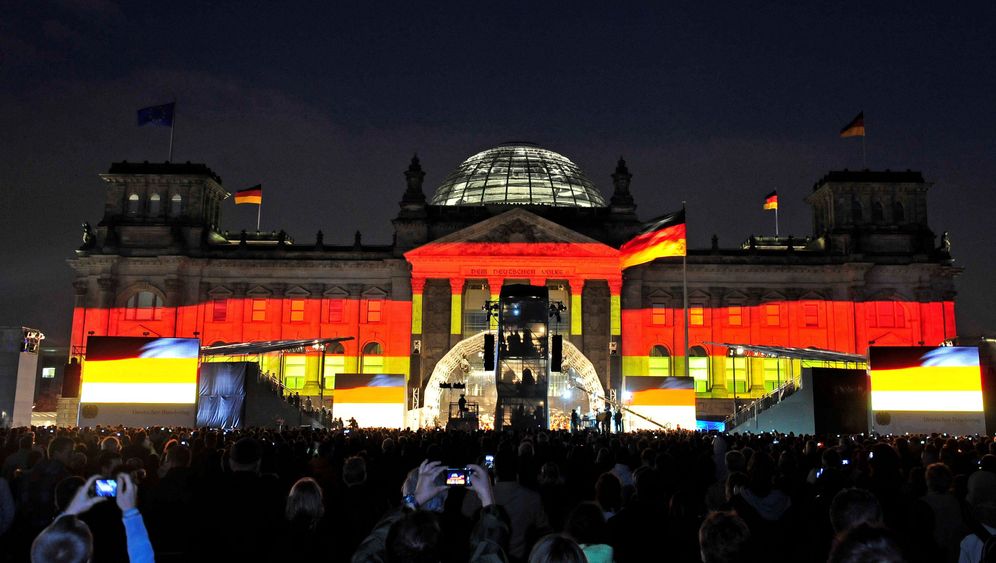 Sunday marked the 20th anniversary of German reunification, and President Christian Wulff used the opportunity to make his case for the better integration of foreigners in the once-divided country. It was Wulff's first major speech since taking office in the mostly ceremonial post last June, and there was a lot riding for him on its success.

Wulff has made several missteps in the past few months, such as taking a luxury vacation at the mansion of his businessman friend Carsten Maschmeyer on the Spanish island of Mallorca, and having his morning bread delivered to Berlin from a bakery in Hanover.

Yet his heaviest criticism came from his handling of the highly charged Sarrazin affair. Wulff was tasked with deciding the fate of Thilo Sarrazin -- a member of the board of Germany's central bank, the Bundesbank -- who last month incited a loud public debate about foreigners and integration with the publication of his book "Germany Does Itself In."

Among other things, Sarrazin has claimed that "the large number of Arabs and Turks in (Berlin) ... have no productive function other than in the fruit and vegetable trade," and that Turks were "conquering Germany ... through a higher birthrate." He has also speculated over a "specific gene" that "all Jews share."

Wulff was charged with having to decide if Sarrazin should be forced off the board of the Bundesbank, and was only spared the politically explosive decision when Sarrazin was offered a buyout from the bank in exchange for his resignation.

The president was criticized for his role in concluding that negotiation, and then remained conspiculously silent on the issue of integration, despite the public debate the affair instigated, and the fact that he had once promised to make integration one of the key issues of his presidency.

In his speech Sunday in the northern city of Bremen, Wulff took on the issue, and said: "When German Muslims write to me, 'You are our president,' then I answer, wholeheartedly, 'Yes, of course, I am your president!'"

Speaking to a room full of local and foreign dignitaries, Wulff said that, in addition to Christianity and Judaism, "Islam also belongs to Germany."

His words were well-received by some in Germany's Muslim community. Aiman Mazyek, the general secretary for the Central Council of Muslims in Germany, told the mass-circulation Bild that Wulff's speech sends a "clear, explicit and important message to all Muslims in Germany."

Several German commentators write in support of Wulff and his contribution to the national debate on integration on Monday.

"He doesn't know the art of making a grand speech, but on the 20th anniversary of German unity, he gave a good, respectable one. It wasn't rhetorical, but it was full of content. The country can gather behind his ideas."

"Wulff covered issues ranging from German unity to the integration of foreigners. There are naysayers who argue that these two themes don't go together, that they don't belong in the same speech. But they are mistaken. Integration is about the second German unification, and Wulf addressed, in an unpretentious manner, the opportunities and challenges that integration presents. In doing so, he fulfilled the expectations of his speech."

"What is more relevant on the day of German unity than the question of integration? The bringing together of a country where the opposite of integration exists within large segments of the population, and closing the growing gap between the governing and the governed?"

"The president did that, but he acted as if the financial crisis and Sarrazin debate had never taken place. There was never an attempt at an explanation for how the highly charged tensions that developed during the fight over the best seller of the season built up. The reasons for that were not laid out in the presidential speech, as Wulff delivered it."

"And what would have been more fitting on this day of remembering the brave who overcame their fears than to talk about the current fears and rituals of ostracism with which such courage is punished today? The words freedom of opinion only came up once during his Bremen speech, and only in the margins. ..."

"No one trusted himself to directly address the Muslim part of our population -- the ones Wulff said were a part of society, but who are always only treated as an absent third party? People would have sat up and taken notice if he had broken this taboo. But the federal president lacked the kind of courage the East Germans showed 20 years ago."

"Without directly saying so, Wulff gave a double speech on integration. In the same way that two once-divided Germanies have succeeded reasonably well in integrating, integration can also be successful for those who weren't always Germans, but who want to belong to the fully-fledged citizens with the same laws and duties."

"So far, so good. But it was also also dull and intellectually modest. The president made everyone feel at home, and hardly seemed to hurt anyone. And no one can complain about that, since his office is not tasked with dealing with flare-ups, but rather with consensus building. But a little more gloss wouldn't have hurt."

"Wulff's speech in Bremen is so well meaning that it couldn't be a good speech.

"It's true the Federal President isn't allowed to comment too specifically on political debates. … If he had, he would have intervened too much in the debate and would thereby have damaged the dignity of his office. But on the other hand, it isn't written anywhere in the constitution that the head of state must confine himself to voicing well-known platitudes of the German integration debate while agreeing with all sides.

"In Wulff's Germany, everyone respects everyone else, we are all proud, we live according to our values, and there is solidarity and welfare and harmony. Of course there are also a few conflicts and struggles over resources and executives who misbehave -- consider the financial crisis! But those are exceptions, not the rule. What's important is that we are one people -- and what a people! A nice people, a very special, loveable people.

"This president appears to have found the basic tone of his term in office: he wants to be conciliatory, a figure of integration. Wulff is cuddling up to his people, he's taking us all by the hand and won't tell any of us off. He won't voice provocative thoughts or unpleasant truths." 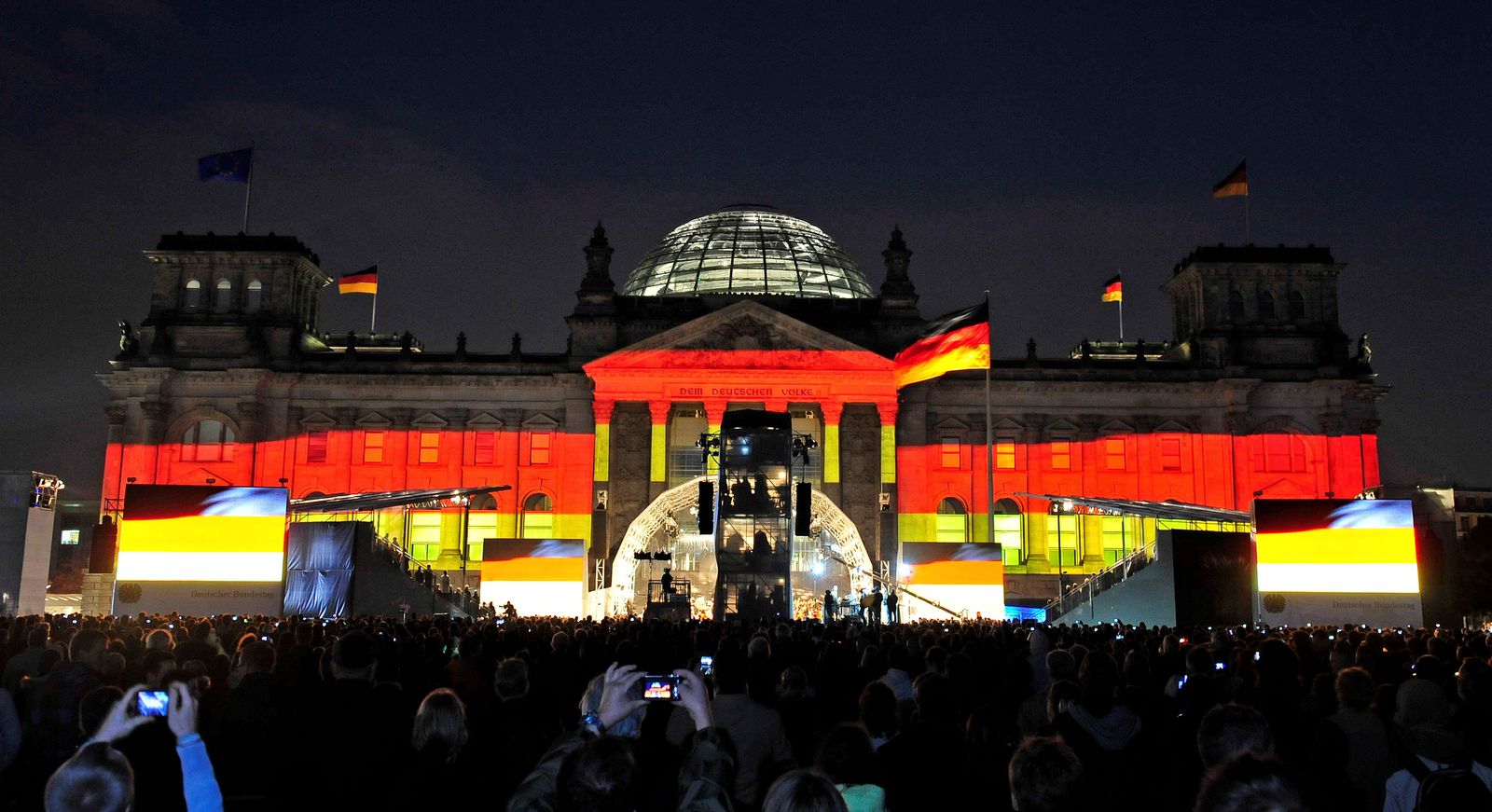 Germany's house of parliament as a screen: A projection of the German national flag lit up the night in Berlin as Germans celebrated the 20th anniversary of reunification on Sunday, Oct. 3 in front of the Reichstag building. 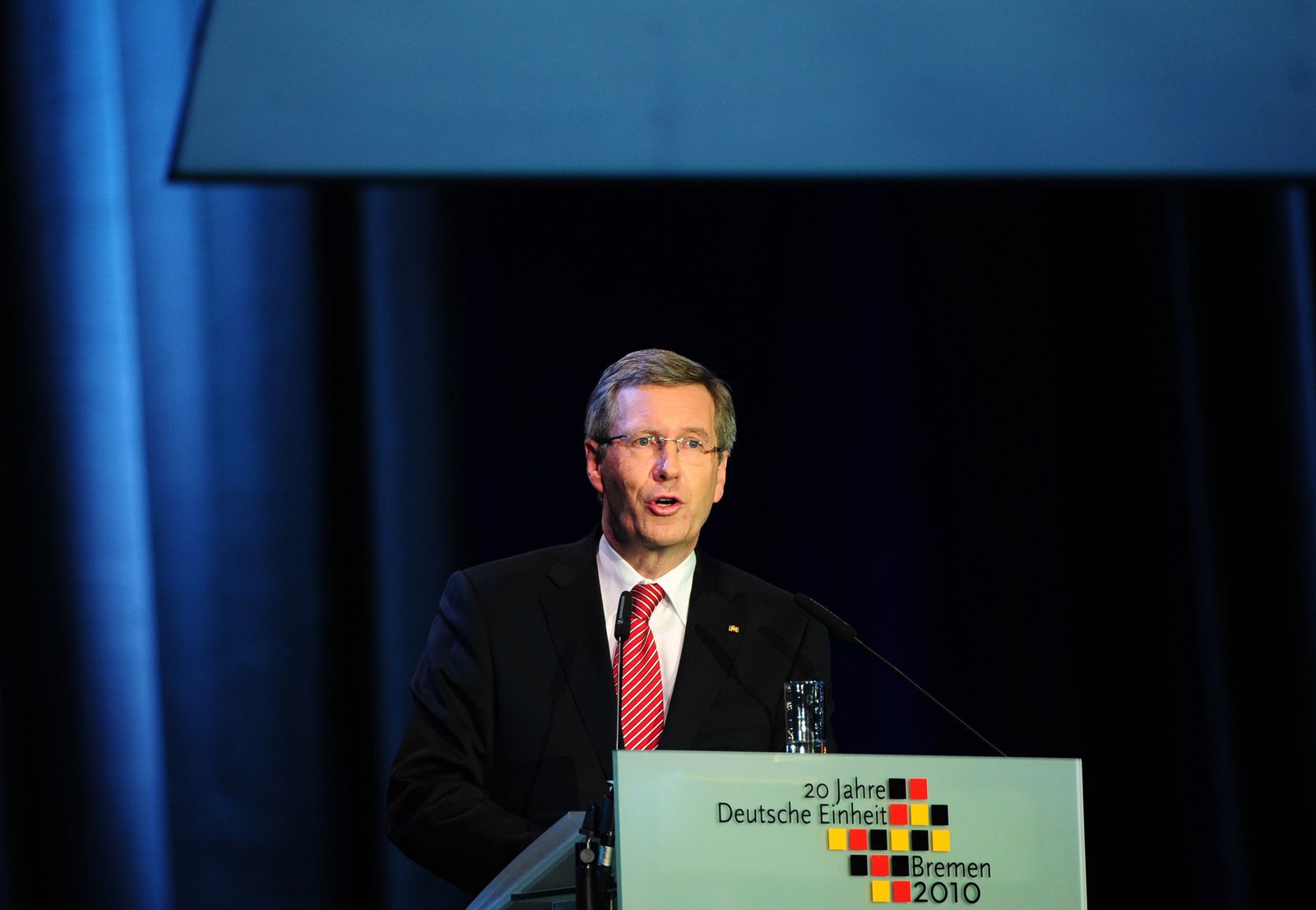 German President Christian Wulff gave his first major address at the 20th anniversary celebration in Bremen. Wulff's speech was a much-anticipated foray into integration politics, and was generally well-received by the German press.