The political shockwaves from the revelations about the Zwickau neo-Nazi terror cell, which is accused of murdering at least 10 people, are continuing in Germany. A debate is raging about the role of the domestic intelligence agency in the case and there have also been calls for a ban on the far-right National Democratic Party (NPD).

The German government is planning to hold a crisis summit on Friday with representatives from the relevant ministries and security authorities from both the state and national level. German Justice Minister Sabine Leutheusser-Schnarrenberger and Federal Interior Minister Hans-Peter Friedrich will take part, as will their counterparts on the state level.

Friedrich has suggested creating a central registry of data on violent right-wing extremists and far-right acts of violence, similar to one that already exists on Islamists. The data would be supplied by the Office for the Protection of the Constitution, Germany's domestic intelligence agency whose role is to monitor political extremists, as well as by the state-level and national police forces. The government is split, however, over the suggestion, with Justice Minister Leutheusser-Schnarrenberger reacting skeptically to the proposal.

There has been massive criticism in recent days of the fact that the authorities failed to prevent the murders allegedly carried out by the group, which called itself the National Socialist Underground and is apparently responsible for the deaths of nine men of Turkish and Greek origin and a 22-year-old policewoman. In particular, there are questions about how much the Office for the Protection of the Constitution knew about the group. Speculation has been fueled by reports that an employee of the intelligence agency was at the scene of one of the murders in Kassel in 2006.

Many politicians are calling for a review of the Office for the Protection of the Constitution's practices. Particularly controversial is the agency's use of paid informers within the neo-Nazi scene. Many are asking how the agency could spend hundreds of thousands of euros paying off informers and still not be aware of such a terror network. There has also been criticism of the fact that some informers apparently used funds obtained from the Office for the Protection of the Constitution to support their extremist activities.

"We don't need an instrument that has no benefits for us," said Volker Kauder, a senior member of Merkel's conservative Christian Democratic Union. Frank-Walter Steinmeier, floor leader for the opposition center-left Social Democrats, said that there were clear indications that the use of paid informers did not lead to more security "but rather the opposite."

Debate on Banning the NPD

The revelations about the terror network has also reignited the debate about banning the far-right NPD. A government-backed attempt to ban the NPD failed in 2003 when the Federal Constitutional Court ruled that the presence of agency informants, some in senior positions within the party, would prejudice the case.

Chancellor Angela Merkel called on Monday for a review into whether the NPD should be banned. But to have any chance of success, a legal bid to outlaw the NPD would require severing ties with informants, effectively sacrificing the authorities' ability to monitor the inner workings of the party.

Meanwhile, more details keep emerging about the National Socialist Underground's activities. The neo-Nazi group was possibly planning to target politicians, it was revealed on Wednesday in the Berlin daily Der Tagesspiegel. According to information obtained by SPIEGEL ONLINE, investigators have found a list with the names and addresses of 88 people including two members of the German parliament, the Bundestag, and representatives of Turkish and Islamic organizations. There is speculation that the list, which stems from 2005, could be of potential targets.

On Wednesday, German commentators scrutinize the debate over how best to combat right-wing extremism in the country.

"Does German society tend to be blind to the threat from the far-right, as some are now saying? SPD floor leader Frank-Walter Steinmeier, for example, has called for an end to the 'trivialization' of right-wing extremism. But one should be cautious when making such demands. If there is a consensus of values in German society, then it is the belief that the far-right poses a danger. When there was a series of attacks on immigrants in Germany in the 1990s following German reunification, German society -- after an initial short period of hesitation -- made it clear that it would not tolerate such violence, through a variety of campaigns, appeals and demonstrations. This social consensus, namely that there is no place for xenophobia, long ago reached politics and mainstream society."

"Nevertheless, in retrospect it is puzzling that, during the investigations into the nine murders, little attention was paid to the fact that all the victims were foreigners. Indeed, that fact was, at least for a while, even used against the victims and their families in an outrageous fashion: The authorities assumed the crimes must be related to the mafia, extortion or other shady dealings. German Interior Minister Friedrich is absolutely right when he says that it is very disturbing that no correlation was made between the murder series and the far-right scene in (the eastern state of) Thuringia."

"It seems reasonable to suppose that in this respect Germany is indeed blind to the threat from the far-right. Twenty-one years after reunification, one cannot avoid the uncomfortable question of why the almost physical hatred of foreigners is still not contained and condemned in parts of eastern Germany, and why it can rely on the tacit support of part of the population."

"In the current debate about far-right terrorism, no idea seems too sweeping to be hastily mentioned in the public debate. Ever since responsibility for the murders of several immigrants and a policewoman was attributed to the far-right group the National Socialist Underground a few days ago, politicians have been falling over themselves with suggestions for the best way forward -- be it calls for a ban on Germany's far-right National Democratic Party, a reform of the security services or a demand for a complete withdrawal of the intelligence agency's controversial informants from the neo-Nazi scene."

"The politicians' empty words, spoken for the sake of appearances, are reminiscent of responses to shooting rampages, most recently in Norway. Likewise this time around, too many questions have yet to be addressed: How could it be that the extremist group was not discovered? Had the killers isolated themselves? Did they have any contact with the far-right NPD? Was the Office of the Protection of the Constitution aware of the group's existence or not? What role did paid informants play in the murders? Did they know about them beforehand or only after the fact? Were they even involved?"

"Sweeping debates about bans are mere theater and do little to serve Germany's security interests. Right-wing extremism has claimed far more victims in recent years than Islamist terror. Thus politicians should ask themselves why they are gearing up for battle against one but not the other. Since Sept. 11, 2001, new anti-terrorism laws have been adopted, an emergency response center erected and cooperation bolstered at the state and federal level. Politicians need to ask themselves whether those instruments, which are deemed so necessary for combating Islamic extremism, would not also come in handy in fighting the far-right in Germany."

"It is right to wonder why a terrorist killing spree was not recognized as such despite the presence of so many well-positioned informers in the NPD and the far-right scene. That could be because that far-right terror has to do with small, crazy cliques which are almost impossible to infiltrate. But it could also be because … there are small, crazy cliques inside and around the Office for the Protection of the Constitution."

"The investigations that will now take place will surely not come to the conclusion that informers are unnecessary, as some politicians are suggesting. ... That would not target the problem itself, but the state's instruments with which it can defend itself against (right-wing extremism)."

"The worse the crime, the higher the expectations are of the security agencies. Everyone is asking the question: How could three people succeed in living illegally and undiscovered for 13 years, and in this timeframe, kill at least 10 people? The question also leads to two conclusions: If the authorities could not prevent a series of murders from being committed, then they either have skeletons in their closets or they are bumbling amateurs."

"Perhaps, the outrageous crime is proof that we do not actually live in a surveillance state, in which the authorities know everything or can at least find everything out at the click of a button."

"It's a mystery why the reaction to a depressing failure by the intelligence agencies and law enforcement officials should be a ban on Germany's far-right National Democratic Party. The state's institutions are, to put it mildly, hopelessly overwhelmed when it comes to surveillance of the extremist right-wing underground. The Federal Constitutional Court overruled a first attempt to ban the party, noting that it was impossible to determine who the real hatemongers really were: the real right-wing extremists or the extremists spying for the Office for the Protection of the Constitution. Yet therein lies the problem: Those working on the far-right margins of intelligence do not abandon their racist or brutal, national socialist sentiments. Worse still, informants in these circles brag about their spying activities and how they fool the authorities. It's simple: As long as no distinction is made between extremists and extremist informers working for the state, a ban on the NPD will remain as preposterous as it is futile. An attempt would only end in failure. Again."

"The ban debate is a kneejerk reaction in our political thinking: Ban them and get rid of them! In reality, this would only mean that the NPD figures -- who are financed with taxpayer money -- would simply go underground. If the level of competence and lack of sensitivity of the Office for the Protection of the Constitution remains unchanged, then their detection problems will only grow to an imponderable level."

In a guest editorial for the tabloid Bild, the prominent German journalist Ernst Elitz writes:

"Right-wing extremist terror does not stop at the borders of Germany's states. It laughs at the rivalry between different authorities. The neo-Nazi murder bandits only had to move to a different German state, and all sign of them was already lost. The rivalry between agents of the Office for the Protection of the Constitution has endangered our security. It is murderous. The terrorists have executed 10 people."

"The politicians have been sloppy in their oversight duty. Now they must decide quickly. It's time to put an end to the 16 spying agencies. The anti-terror struggle needs central control, clear leadership and data exchange without state borders. The politicians must act. Only that will protect us against crime!" 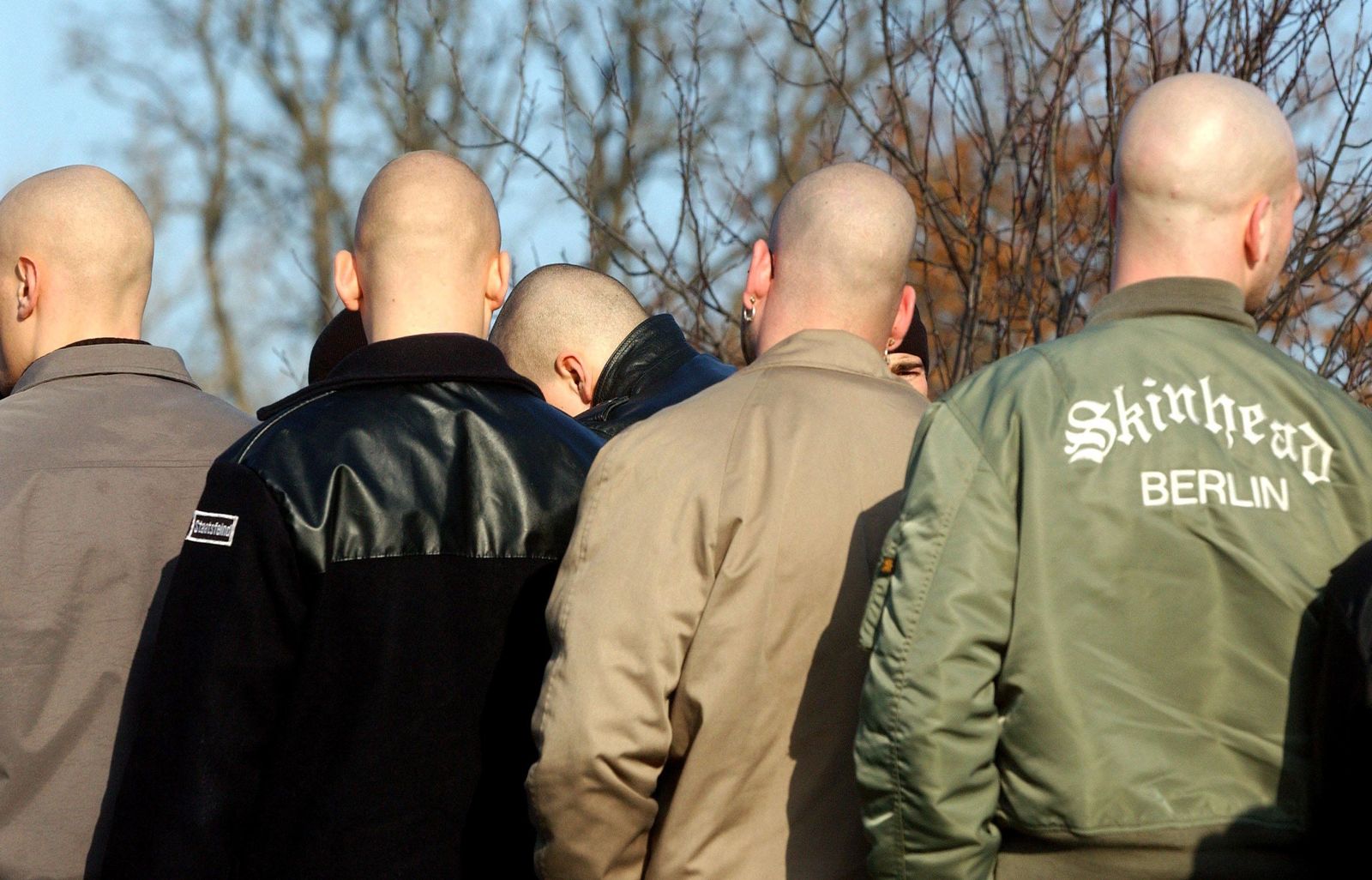 Neo-Nazis in Halbe (archive photo): The German government is debating how best to combat right-wing extremism in the wake of the revelations about the Zwickau cell.