The photos on the newspaper front pages show burned-out cars on city streets. But this is not London following another riot by indignant youths. Instead, this is Berlin, where a spate of arson attacks on cars is continuing unabated.

On Thursday night and the early hours of Friday, 11 cars went up in flames in various parts of Berlin, according to police. It was the fourth night of arson attacks in a row, and the total would probably have been higher if it hadn't been for the rain. So far this year, 141 cars have gone up in flames in Berlin. There has also been a series of arson attacks in Hamburg.

On Thursday, German Chancellor Angela Merkel weighed in on the debate about the attacks for the first time, saying that she was watching developments with great concern. "Human lives are being put at risk in a cold-blooded way," she said, adding that it was important to support the police in their efforts.

Berlin Mayor Klaus Wowereit, a member of the center-left Social Democratic Party (SPD), has called on Berliners to be vigilent in helping police catch the arsonists. "We are sort of floundering around in the dark," he admitted. The police have at least 130 officers patrolling at night to try to prevent arson, and helicopters are also being used to detect criminals, he said.

'It's Over in Seconds'

It is unclear who is behind the attacks, which have been continuing on and off for years. At least some of the incidents over the past few years are believed to be the work of left-wing extremists, who have targeted luxury cars as a protest against the rapid gentrification of certain city districts. But the fact that cheaper cars are also now being targeted as well as upmarket models suggest that politics is no longer the main motive. According to police, observation of the left-wing scene suggests that activists have rejected arson attacks as a form of political protest. Police now suspect that copycats are responsible for the current wave of arson, Berlin police spokesman Thomas Neuendorf told the news agency DPA.

The authorities are hampered in their investigations by the fact that Berlin has over 1 million cars, parked along thousands of kilometers of streets, all of which are potentially at risk. Another problem is that the perpetrators use easily available materials to commit their crimes, namely fire lighters for barbecues, which they place on car tires and ignite. "It's over in seconds," said Neuendorf. "By the time the tires catch fire, the perpetrator is already a couple of streets away." Suspects who have been caught near burning cars have also had to be released due to a lack of evidence.

The city-state of Berlin goes to the polls on Sept. 18, and the spate of arson attacks has now become a key issue in the election campaign. The onus is on Wowereit, who is seeking reelection, to show results. The Berlin chapter of Merkel's conservative Christian Democratic Union (CDU), which is lagging behind the Social Democrats in the polls, is jumping on the arson wave as an issue with which it hopes to win votes.

On Friday, German commentators take a look at Berlin's efforts to stop the arson.

"Given the unrealistic ideas that some have proposed to fight the arson attacks, one could almost praise Mayor Klaus Wowereit for simply admitting that he is floundering around in the dark. But for the head of a city-state government to say something like that is an admission of failure. No one expects him to show instant results. Wowereit may have inherited the problem from his predecessors, but it has accompanied him throughout his time as mayor. And the fact that Wowereit has failed to find a solution to the problem after 10 years in office raises doubts about the competence of the man who wants to be reelected as Berlin mayor on Sept. 18."

"Nevertheless, Wowereit recognized that the wave of burning cars, coming so soon before the election, could be dangerous for him. Even before the opposition took up the issue, Wowereit was calling on Berlin residents to help in the hunt for the perpetrators. That won't help him very much though, unless a brave Berliner produces a video of an arsonist, complete with name and address, in the coming days."

"The election campaign finally has an issue, though -- one that seems like a godsend for the conservative CDU, a party that likes to claim it has the most expertise in matters of law and order. They are eagerly printing new campaign posters, attacking the city-state's government and depicting left-wing extremists as the enemy."

"And what about the arsonists? They can simply wait until the police officers, experts and election campaigners have forgotten about the issue again. And then, just like always when they have nothing better to do, they will return to setting cars on fire. Just like they've been doing for the last 20 years in Berlin."

"Berliners can be happy that Wowereit is in the middle of an election campaign. Otherwise he would treat the car owners (with the same blithe indifference) that he showed to the Berlin pensioners who broke their bones falling on snow and ice in the sloppily managed capital during the winter. … Wowereit typically reacts with flippancy on such occasions, deflecting criticism of his deficient policies with snappy slogans such as (his famous description of Berlin as) 'poor but sexy.' He cannot afford such flippancy now."

"But he is still coming up with such comments, for example saying that, in a big city, the police can not be everywhere at the same time. He speaks as if that would be any different in a small town, as if that is the crucial factor and as if crime can only be fought if a city is transformed into a police state. But the fight against crime begins elsewhere. At least Wowereit is honest when he says: 'We are sort of floundering around in the dark.' That could turn into the soundbite of this campaign."

"The enthusiasm about Berlin as the capital of alternative culture has never been as great as it is these days. EasyJet tourism is booming, as is the real estate market -- prices may be rising in Berlin, but beer and apartments are still relatively cheap. And everything is so peaceful here. You can walk around Berlin in relative safety at any hour of the day, much more so than in almost any other big city."

"But not everyone is equally delighted by the fact that the global middle class has discovered Berlin. Many long-term Berlin residents are feeling uneasy. They wonder how long they will be able to afford to live in their neighborhoods. Wages in Berlin are indeed low. Nowadays people complain about the tourists as much as they do about the lousy weather. And now more and more cars are burning at night. Is there a connection between the tourism fatigue of long-term residents, the rising rents and the nightly arson attacks? Are things getting dangerous in the party capital?"

"And will Berlin's politicians take the arson excesses as an opportunity to finally do something to preserve a diverse social mix in the city's central districts? … Ten years ago, rent controls and efforts to avoid social exclusion were still part of the city's political landscape. But nowadays such regulatory measures are taboo. The arsonists will not be able to change that. … The real issue is not the burning cars -- it is the rampant social displacement." 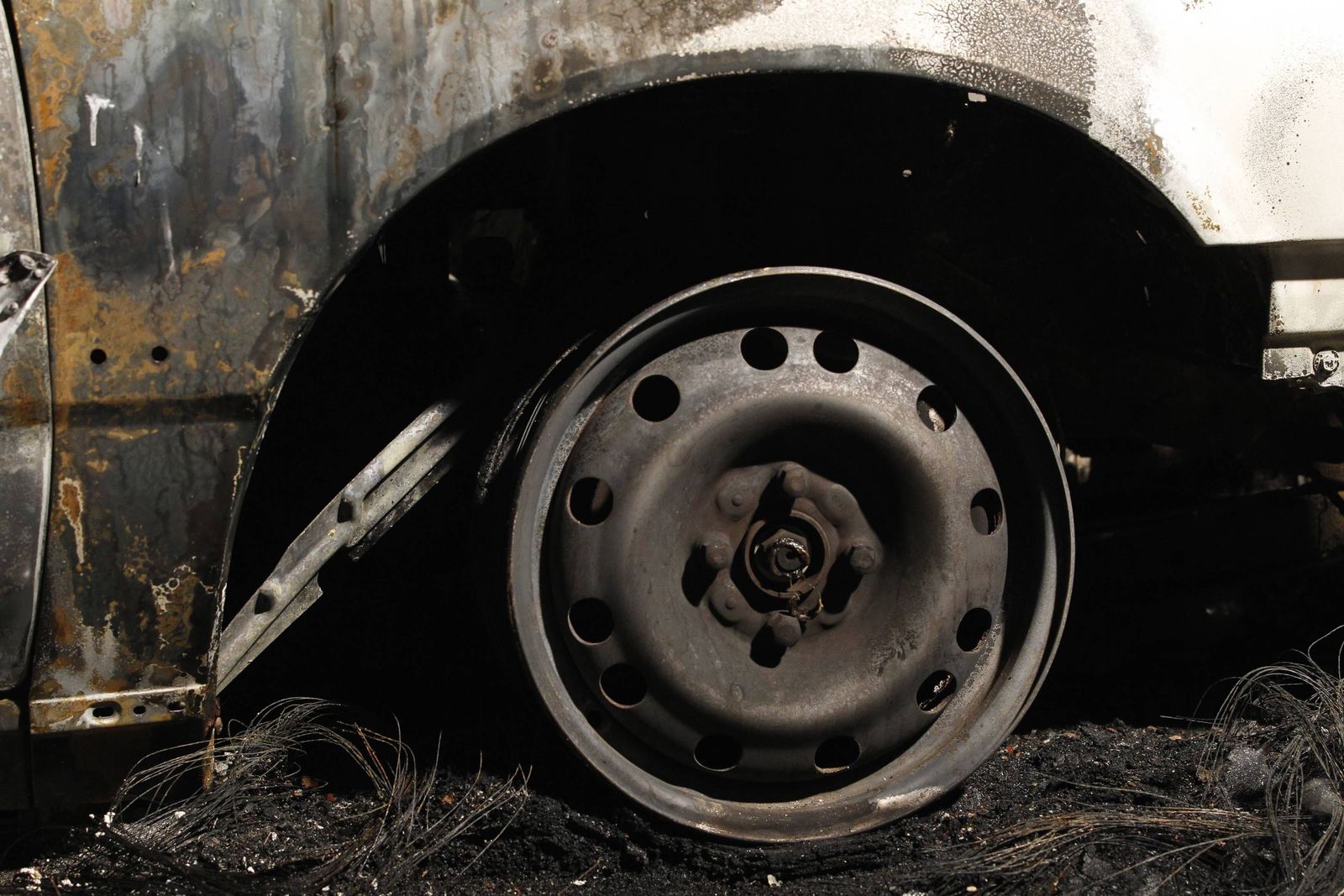 A burned-out car in the yard of a Berlin car dealer on Friday: The wave of arson attacks has become an issue in the Berlin election campaign.