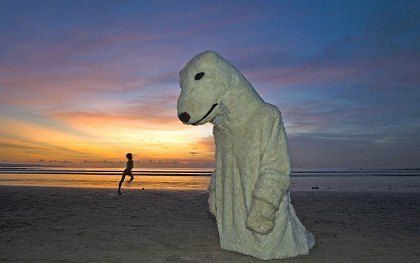 Just how far-reaching the Bali agreement might be remains to be seen.

It took just hours for the White House to begin back-pedalling on the Bali climate negotiations breakthrough. One minute, US head of delegation Paula Dobriansky was agreeing to a blueprint for a new international accord to replace the expiring Kyoto Protocol. The next minute, the White House press secretary released a statement indicating that Washington has "serious concerns" about the agreement reached on the Indonesian island of Bali.

The release made it clear that the US would like to see countries like China, India and Brazil be required to do more to reduce greenhouse gas emissions. "Major developing economies must likewise act," the statement said. "The United States believes that any arrangement must also take into account the legitimate right of the major developing countries, and indeed all countries, to grow their economies."

In Bali, the final breakthrough came on Saturday. The US delegation, after being booed and hissed at for opposing a call from developing nations for more technological help fighting climate change, relented and agreed to the request. That paved the way for an agreement on Saturday after two weeks of negotiations.

At one point during the final hours of the conference the delegate from Papua New Guinea, Kevin Conrad, summed up international frustration with the US during the talks. "We seek your leadership," he said referring to the U.S. "But if for some reason you are not willing to lead, leave it to the rest of us. Please, get out of the way."

The US likewise resisted an aggressive EU-led campaign to include specific emissions reduction targets for industrial nations in the Bali agreement. The final roadmap has none.

Washington said the agreement marked a new chapter in climate diplomacy after six years of disputes with major allies since President George W. Bush pulled out of the Kyoto Protocol, the main existing plan for combating warming.

German media commentators say Washington is increasingly isolated in one of the most pressing problems facing humanity, and that it's up to the Europeans to save the world.

"Those who expected a breakthrough in the fight against global warming were disappointed. The Bali Climate Conference was a meeting of semanticists, not of world saviors."

"But the outcome of Bali, the launch of new climate talks, can also be judged more favorably. Global climate politics is a complex and pretty sensitive affair. Measured in terms of the discussions that took place a year ago in Nairobi, a lot happened in Bali. The fact that 190 countries were even able to agree to launch new negotiations, that they have set themselves the first targets by 2020 -- that is tremendous progress, even if it is concealed in a footnote.... In talks that bordered on the dramatic, the US commenced its return towards a climate agreement.

"But will that be enough? There are justified doubts. On close inspection the negotiating documents contain more than the roadmap for further climate negotiations. They are full of exceptions, loopholes, caveats.

"Given the scale of the problem, the fight against global warming needs a different momentum. Up to now, the Europeans alone represent this momentum. They alone are currently showing the courage to take leadership and the readiness to shoulder burdens. In 2007 this courage has led to astonishing progress. It has helped to break the reticence of the emerging economies. China, India, Brazil and South Africa are no longer slowing down climate protection, they're promoting it.

"But they all can't make up for the absence of the US, which is missing from the process not just as the biggest greenhouse gas emitter but as a leading power.... The post-Bush government will scarcely want to tolerate this isolation. That gives rise to hope."

"The Bali climate conference will enter the history books -- as a disaster. In their speeches all the ministers and delegation heads stressed how frightening the conclusions of the UN climate researchers were and that urgent action was now required. But in the negotiations they weren't prepared to shift as much as a single comma. That suggests that climate wasn't the main focus of the climate saviors. Money was the central issue.

"Everyone emerged as losers at this conference. UN Secretary General Ban Ki Moon was among them, because he remained devoid of any influence on the world stage. But the main damage was done to the world's climate diplomats. Their mandate to solve humanity's most pressing problem lost much of its credibility."

"The fiasco of Indonesia has one good side: All parties involved now have two years in which to regain the lost confidence through constructive, forceful decisions. The reckoning will come in 2009 at the world climate conference in Copenhagen."

"If the Democrats win the presidential election next year, the new agreement could be more ambitious than the mandate envisages."

"If the international community is to limit global warming to at most 2 degrees Celsius above the pre-industrial age, it will require an expensive reconstruction of the economy. It wouldn't be exaggerated to call it a new industrial revolution.... This reconstruction will swallow up gigantic sums. The cost of reducing emissions in 2030 is estimated at around $200 billion. That's more than even the rich states can afford. Additional funds will have to be found. Either through taxation or through trade in emission certificates that turn carbon dioxide into a cost factor. The market economy approach has its advantages. It is cost efficient and encourages innovation. Companies forced to buy certificates look for technical ideas to produce as little CO2 as possible."

"The outcome of Bali is no reason to be disappointed. While diplomats quarrel over footnotes, financial interest and market logic will on their own ensure progress on climate protection."

"The most important driving force behind protection remains a credible pioneer. Only if a group of industrial nations forges ahead and shows that climate-friendly technology can be profitable will others follow. Germany and Europe have taken on this pioneering role once and for all. That too is good news from the climate conference.