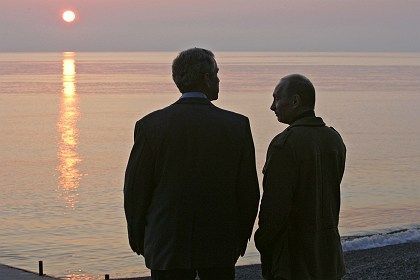 Bush, Putin and the sunset over the Black Sea.

In 2001, US President George W. Bush looked deep into Russian President Vladimir Putin's eyes and, as he said at the time, "was able to get a sense of his soul." This time around -- despite a sunset walk on the beach during a weekend meeting between the two outgoing leaders at the Black Sea resort of Sochi -- the two leaders were unable to cap off their seven-year relationship with a foreign policy union.

Putin reiterated his concern about US plans to build a missile shield that would rely on bases in Central Europe and likewise voiced his continued opposition to NATO plans for expansion in Ukraine and Georgia -- plans that were postponed at last week's NATO summit in Bucharest.

"We got a lot of way to go," Bush said following the largely amicable meeting.

Bush and Putin, however, will likely not be the ones coming up with a solution. The Russian president makes way for his successor Dmitry Medvedev next month and Bush's term comes to an end in January. Indeed, National Security Advisor Stephen Hadley told reporters that, when it comes to finding agreement on the missile shield, "they can leave that to their prospective successors."

Bush also met with Medvedev briefly and said he found him to be "very positive" and "a straightforward fellow." But despite the outpouring of kind words from both sides this weekend -- and the friendly relations between Bush and Putin -- important foreign policy differences are no closer to being solved. The two agreed on a "strategic framework," meant to guide future relations between Moscow and Washington, but the disagreements remain. German commentators on Monday take a look.

"There certainly has been no shortage of affectionate words and time spent together (between Bush and Putin) in recent years. Bush has met with Putin more than 20 times, more often than with any other politician other than former British Prime Minster Tony Blair. And still, the relationship has frozen recently into a Cold Peace that, given the list of challenges -- from Iran to atomic weapons proliferation to environmental challenges -- must be interpreted as a kind of sullen denial. The United States never developed a new Russia policy after the collapse of the Soviet Union, and the fact that Bush looked into Putin's eyes and saw his 'soul' is still seen in Russia as a prime example of American lack of judgement. At the time, Russia was politically and economically a wreck. The Cold War was over, and America was the victor."

"The new, rich Russia, on the other hand, is fighting with dogged determination for a place in the upper echelons of global politics. The threats made in the case of NATO expansion, the discontinuation of the Conventional Armed Forces in Europe Treaty, but especially the ongoing disagreement over the US missile shield are, for Putin, less military issues than political levers. Russia possesses over 3,000 nuclear warheads, the destructive power of which would be completely unaffected by 10 US interceptor rockets stationed in Poland and a radar station in the Czech Republic. But America's advance into Eastern Europe has made it painfully obvious to Russia that -- as oil-rich as the country might be -- it has only managed to elevate itself to the position of a regional power at best. Russia is still missing the global foreign policy dimension of the Americans."

"In recent years, America has ignored Russia. That was negligent. Russia, meanwhile, opted for aggressive rhetoric that outstripped even its legitimate concerns. That was risky. In Sochi, it seemed as though the two leaders were contrite in the face of this development, but it was also apparent that the ship might be difficult to right. That, though, is in the hands of the next presidents."

The business daily Handelsblatt sees both leaders as having been weakened by the NATO summit:

"Sochi unfortunately demonstrated the limits of the power of both presidents. Bush and Putin cannot act as freely as it may seem. In the US, Bush was criticized for not having been able to push through NATO membership for Ukraine and Georgia at the summit in Bucharest. Moscow and the Europeans won, commentators in the US media said. That made it difficult for him to offer any concessions when it came to the missile shield."

"But Putin's latitude was likewise limited after Bucharest. In Moscow, NATO's vague promises of eventual membership to Georgia and Ukraine were seen in a completely different light: as a victory for Washington. Additionally, Putin's appearance in Bucharest was rather moderate. Concessions on the missile shield immediately thereafter would have been too much for him."

"Aside from a few differences, the Russians and the Americans are politically much closer than Putin's rhetoric would lead one to believe. Like Moscow, Washington sees an Iranian atomic weapon as the greatest threat to its own security. Like the White House, the Kremlin is convinced that Iran cannot be allowed to become an atomic power. Similar to the Americans, the Russians are concerned about the Taliban possibly returning to power in Afghanistan."

"All that remains is the debate over the missile shield. But that disagreement has likewise lost momentum. Moscow is using the dispute to follow a tried-and-true Cold War strategy: Whenever the US comes up with an arms initiative, Moscow initially tries to drive a wedge between the US and Europe. Now that the Europeans and Americans have agreed that the missile shield will be built and that Bush will integrate the Russians into the planning, the Kremlin is searching for compromise."

The left-leaning Die Tageszeitung, on the other hand, doesn't see the point of the Sochi meeting:

"Putin's term comes to an end next month. Bush's comes to an end in January. Putin's successor Dmitry Medvedev wasn't even invited to the discussions between the two leaders. Why Bush is negotiating with Putin in April instead of with Medvedev in May is only the first of many riddles when it comes to the missile shield. The next question is whether Bush seriously believes that he can push the project through Congress as the lame duck president that he is. The missile shield is also controversial in the US, in both parties, for political, budgetary and technical reasons. It is unlikely that the Democrats Hillary Clinton or Barack Obama, should they end up in the White House, would pursue the shield in its current form. Should Republican John McCain win the elections, it is likely that he will continue to pursue the plans. But he would likely make Iraq his first priority rather than squabbling with Medvedev about a missile shield that no one guarantees will even work."

"It isn't worth it anymore to lament Bush's remarkable talent for out-of-date political proposals. He might gain a few extra points among Republican hardliners for his fruitless obstinacy. But the rest of the country hardly even noticed last week that Bush was out of the country."