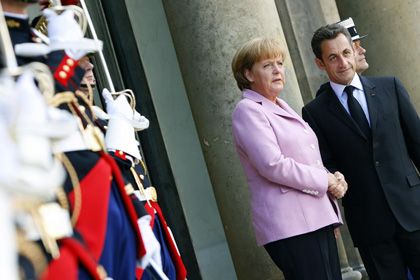 The European Union's failure to come up with a unified approach to tackling the financial crisis at Saturday's summit meeting of the EU's four biggest economies shows that European politicians haven't yet realized the dimension of the risks facing the financial system, write German media commentators.

Governments effectively agreed to go it alone in shoring up troubled financial institutions in their countries -- the wrong response given how interwoven Europe's financial markets are.

The divisions were highlighted on Sunday when Germany became the latest country to give a state guarantee for bank deposits in a move that has put other countries like the United Kingdom under pressure to follow suit.

Now Germany, Ireland, Greece, Denmark and Austria have given such guarantees, reflecting concern that the crisis could cause a disastrous rush to withdraw cash from banks, media commentators write.

German editorial page writers say it's no longer enough for politicians to point the finger of blame for the crisis at bank managers. The current escalation of the problem isn't due to reckless speculation and poor risk management, they argue, but rather the threat of a systemic crisis that is undermining confidence in the entire banking system and preventing banks from lending each other money.

At this point, commentators write, it's only the governments that can stop the crisis spreading.

"Ireland -- and now Germany too -- have recognized how serious the crisis has become. The financial markets are gripped by fear, and fear can rapidly turn to panic."

"From the tabloid press to the big daily newspapers, the fear of losing one's personal savings is dominating the front pages. The crisis is on everyone's mind. The worst-case scenario can no longer be ruled out -- a run on the banks. Such a loss of confidence hasn't seemed imaginable in Germany since World War II. But the danger is real. This growing fear must be countered in order to remove this risk. EU states should give a pan-European guarantee for savings deposits."

"But the governments are still hesitating. Instead of developing a common solution, Europe's leaders last weekend agreed to the principle of only intervening when there's acute danger. Every country is to protect its banks with its own resources, just as if the EU didn't have interwoven financial markets. People who act like that have evidently failed to grasp the scale of the abyss facing the EU."

"This is no longer about rescuing banks that got into trouble through mistaken speculation. Now even those banks that have pursued solid business strategies and put their faith in the reliability of others have to be rescued from the crisis. It may be understandable if attempts are made to hold bank managers to account in moral and other terms. But that approach doesn't live up to the nature of the problem."

"The next crisis summit will come soon."

"Politicians barely leave out an opportunity to point the finger at supposedly incapable bankers. The chancellor did so the sidelines of the crisis summit in Paris on Saturday evening. Those who caused the problems should make their contribution to solving the financial crisis, she said."

"On the face of it, that sounds logical and fair. But Angela Merkel has unfortunately not explained in what way German banks are to blame. Are Commerzbank or the Hamburg savings bank to blame if the systemic crisis that stems from mortgage borrowers in the United States has reached such dimensions that banks have stopped lending each other money?"

"Is it Deutsche Bank CEO Josef Ackermann's fault if the private banks can't shoulder much more of the risks in the rescue of Hypo Real Estate without getting into trouble themselves?"

"It's not surprising that Berlin politicians aren't especially understanding now that managers are desperately calling for state intervention. But this also betrays the politicians' lack of understanding of how dramatic the situation is. They prefer to condemn managers and banks rather than finding solutions to a systemic crisis."

"The market economy depends on people and institutions trusting one another. But if this trust is lost, then only the government can solve the problem in the short term."

In its leader, the conservative Frankfurter Allgemeine Zeitung argues that the bankers have failed:

"With their nervousness and their mutual loss of confidence they have contributed heavily towards destabilizing the system. In such a situation only the state can restore confidence, as questionable as that may be from a regulatory point of view. But that also means people must now not lose their remaining faith in free market forces. That would threaten our prosperity in the long term. That's why the bailouts mustn't amount to personal rescues of the failed bankers themselves. They have made taxpayers and shareholders pay for their truly disastrous mistakes. They have to go."

"If there's a seriously injured person lying bleeding on the street after an accident, no emergency doctor asks about insurance. If a house is in flames, no fireman asks if the owner paid his taxes. What matters is to rescue those in danger and contain the fire. Finding the culprit has to come later."

"Why should tackling the banking crisis be any different? Germany's financial industry is in peril. It would probably only have been fair to let the real estate and state financer Hypo Real Estate go bankrupt. But then the fire would have spread, further bank collapses would follow."

"Because all market participants are so interconnected, scarcely any bank would be able to avoid the consequences. The customers might panic and the run on banks would presumably push other banks into insolvency. This escalation of the crisis must be prevented at all costs. That is why the German government now did what it criticized Ireland for doing: It gave an unlimited guarantee for deposits. Even if a pan-European solution would have been better -- the financial industry needs a period of calm to gather its strength."

"This is not just about plugging gigantic financial holes but also about preventing the crisis of global capitalism from becoming a global crisis of democracy. The managers of the international financial markets have done a lot to make it so. They successfully tried to submit democratically elected governments to their discipline. They put governments under pressure, forced them to dismantle controls while forming purpose-built companies that fled to parts of the world where they could hide their risky businesses even better."

"The high managers of the financial markets pretended that democracy was a playground for the little man and that election campaigns and elections merely served the same function that 'bread and games' had in ancient Rome."

"Democracy is a community that forges its future together. The directors of the financial markets divorced themselves from this community. The power and the future of democratic governance now depend on whether this development can be reversed and whether new regulations can be imposed on markets."

"That is the true task of summits of the industrial nations' governments. The deregulated financial market is a satanic mill. Democracies can't throw their money into it and watch how it continues to turn in the same way as ever."