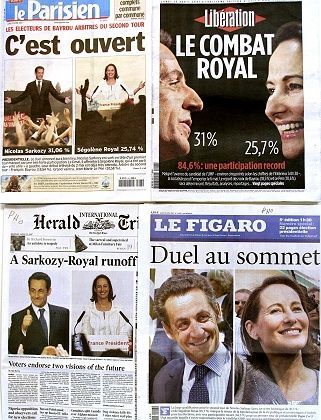 "Top Duel": Sarkozy and Royal both have their eyes set on Elysee Palace in two weeks.

As widely expected, Nicolas Sarkozy and Segolene Royal won the first round of voting in French presidential elections on Sunday, sending the rivals to a runoff election in two weeks on Sunday, May 6.

Conservative candidate Sarkozy of the Union for a Popular Movement Party claimed just under 30 percent of the vote -- more than President Jacques Chirac, whom he would succeed, ever gained in a national election. Royal also did better than expected -- after slumping in recent public opinion polls, she earned a healthy 26.3 percent of Sunday's vote. Francois Bayrou, though he didn't make the runoff, also pulled in an impressive 18.8 percent, giving a serious challenge to the monopoly status of France's two main parties.

But this year's healthy voter turnout wasn't so good for France's perennial candidate of the far right, Jean-Marie Le Pen, who scored a relatively feeble 11 percent -- five years after grabbing the world's attention by clearing the first round in 2002 and losing only to Jacques Chirac in the runoff.

On Monday, German editorialists are impressed by Sarkozy and Royal's strong showings. Most, however, place their bets for the runoff on Sarkozy.

"Democracy is alive in France, and how! The French proved that twice on Sunday -- first by showing a voter turnout (at least 85 percent of registered voters) that Germany hasn't seen in years. And second with the clear rejection of the right-wing supporters of candidate Jean-Marie Le Pen. Le Pen was the election's biggest loser on Sunday night."

"That all speaks for the quality of the campaign. Three candidates succeeded in mobilizing the masses on their behalf. The departing president has good reason to be envious. Chirac never even came close in past first-round votes to the number of votes scored by Sarkozy and Royal last night. The new president will have greater support from the populace, regardless who wins."

"For his part, Francois Bayrou may not have made it into the second round of voting, but he should still feel like the third winner. He was able to triple the number of votes he got in 2002 with his message of political centrism. For a political system as traditionally bipolar as France's, Bayrou's results are a sensation. In two weeks, his voters will represent the swing bloc in an election in which France must not only choose from two fundamentally different people, but also between two designs for its society."

"During the second vote, much will depend on where Bayrou's supporters cast their votes (or whether, disappointed, they just stay home). Hailing from southwest France, Bayrou already served as a minister in a conservative government; his party, the Union for French Democracy -- most of whose members have been absorbed by the neo-Gaullists in recent years -- has traditionally been counted as part of the right. But this time, his plan was to win over left-wing voters on a mass scale. He has obviously failed, and that speaks for a Sarkozy victory. Political scientists believe the right wing could secure up to 60 percent of voters, whereas the left would only get 40 percent. But no election campaign between the Left and Right has ever ended with such clear results."

"It's been expected for months, but now the duel between conservative Sarkozy and Socialist Royal is actually going to happen after all: Man against woman, Napoleon against Joan of Arc. As usual, with the exception of 2002, this means that the Left and the Right stand against each other, irreconcilably, in the decisive round. The duel that in two weeks will amount to a forced retreat into the old ideological plan that has paralyzed France politically for years."

"Still, there was one small surprise in an election that was longer, more scalding and more emotional than any other in years. Royal, who for a longtime was far behind in the polls, made a relatively strong recovery. That's not unimportant, because it puts into doubt one thing that previously seemed set in stone: that Sarkozy will score a clear and decisive victory."

"In the end, it's possible the results will be very close and that France will divide into two equally large camps. If that happens, it would be a miracle if Sarkozy or Royal managed to deliver in their promises to emerge victorious as a uniting president of France."

"The usual political monopoly of left and right remains in France. The distribution of votes shows that Sarkozy will enter the run-off with a clear advantage. With nearly 30 percent, he has 10 points more than Chirac got with his best results in 1995. If he is able to take that dynamic with him into the second voting round, then it would be difficult for him to lose. With 25 percent of the vote, Royal -- who was bestowed the Socialist candidacy in January because there was nobody better -- has already exhausted the number of voters she can win. Even with the remaining votes from the Left, she would be unable to achieve a majority."

"With his 18 percent, Bayrou could become a 'Kingmaker' -- if he were to call on his supporters to vote for Royal. But that would be a highly risky proposition because many of his voters, who are traditionally anchored in the right, could fail him. But if Bayrou were able to beat favorite Sarkozy in an election alliance with Socialist Royal, then he might succeed in creating his vision of a 'Coalition of the Reasonable' between the Left and Right."

"April 22, 2007 was to be the day that the disgrace of France was exorcised. Le Pen had to be removed. That was the only issue shared by the traditional Left and Right -- and it's also the reason for such high voter turnout. But now the French have two turbulent weeks ahead of them. The Left, which in the first round of voting showed its usual splintering by presenting a half dozen candidates, now has the singular goal of ensuring that Sarkozy not win."

"During the entire history of the Fifth Republic, the Left has never surpassed the 40 percent mark in the first round of voting. And because Sarkozy already went so far to the right during the campaign, he can't hope to increase his voter base there. Thus, the race in two weeks will be won by the candidate who best positions him or herself to the political center."