On Tuesday morning, German Chancellor Angela Merkel was caught off guard by the sudden resignation of Defense Minister Karl-Theodor zu Guttenberg. On Tuesday evening, she went on the offensive. And on Wednesday, she planned to name a new defense minister.

Interior Minister Thomas de Maizière will take over at the Defense Ministry while his position will be filled by Hans-Peter Friedrich, a senior member of the Christian Social Union (CSU), the Bavarian sister party to Merkel's Christian Democrats and Guttenberg's political home.

De Maizière, while an experienced politician in his own right, will have big shoes to fill. Guttenberg was seen as a rising star in the German political landscape with many forecasting that he could one day take up residency in the Chancellery. The CSU hoped that he could provide the kind of political leverage the party has been missing since the departure of Edmund Stoiber in 2007.

But indications that Guttenberg had plagiarized extensive passages of his doctoral thesis proved more than even the baron from Bavaria could survive. Since the so-called copy-and-paste affair was first revealed in mid-February, the attacks on Guttenberg -- from the opposition, from the media, from German academia and, ultimately, from within his own political camp -- had become increasingly vicious. On Tuesday, he bowed to the pressure, announcing "I have reached the limits of my strength."

In comments on Tuesday, Merkel said that "today is not the time to discuss his successor or to make that decision." But already on Tuesday evening, the CSU leadership gathered in Munich to reach a consensus on possible candidates.

The chancellor, for her part, spent Tuesday afternoon launching an attack on her political opponents. Secure in the knowledge that German academia was furious with Guttenberg, the opposition in Berlin spent much of the last two weeks blasting Guttenberg for his refusal to resign and accusing Merkel of not taking her defense minister's lapse seriously enough.

Speaking at a campaign event in Karlsruhe ahead of Baden-Württemberg state elections later this month, Merkel said "Germany has seldom seen so much hypocrisy and mendacity." Referring to the opposition, she said "nobody can lecture us when it comes to integrity and honor in our society."

German voters, it would seem, aren't so sure. A political poll released on Wednesday morning indicates that support for Merkel's conservatives has fallen by two percentage points to 34 percent while the opposition Social Democrats has seen a four percentage point rise in their fortunes to 27 percent.

Commentators in Germany take a look at Guttenberg's resignation in the editorial pages of the country's leading dailies on Wednesday.

The center-left daily Süddeutsche Zeitung, which is based in Guttenberg's home state of Bavaria, writes:

"Guttenberg had to go. He wrote his dissertation in a manner which led Professor Oliver Lepsius, from Guttenberg's alma mater University of Bayreuth, to call him a 'con artist.' Were that the extent of it, Guttenberg could have survived politically -- had he admitted to his transgression in a timely manner and ensured all those in Germany who have earned a university degree that integrity and academia are inseparable. But he didn't. Instead, he tried to relativize his serious misconduct. Chancellor Merkel supported him in the effort when she said she hired him as a minister and not as a research assistant. Good to know that the ability to split one's personality is an important hiring criteria for Merkel."

"Decisive for Guttenberg's resignation-cum-downfall is that, by attempting to disguise his plagiarism and presenting it as nothing more than a trifle ('just a few footnotes'), he made enemies of universities, institutes and all of German academia. ... Guttenberg realized that, and named his dissertation as one reason for his resignation."

"But the other reason he named, and this is typical of Guttenberg, has nothing to do with him. The 'focus of the public and the media' had become so skewed, he analyzed in his resignation speech, that it had 'become only about me, to the detriment of the soldiers.' He, as minister, could not allow that to continue, he said."

"That is really magnificent. Guttenberg is blaming tens of thousands of academics and, of course, most media outlets of focusing on him rather than on North Africa or Afghanistan. This from the man who staged a talk show in Afghanistan, and now he has a problem with the media? The fact that he used exactly this media at will when pasting together his DIY dissertation -- the same media which has been reporting on Afghanistan for decades -- goes unmentioned. As Guttenberg was focusing on his own self defense in Berlin, Süddeutsche correspondents were arrested in Cairo and one could read a long analysis of events in the Maghreb in the Frankfurter Allgemeine Zeitung. Those who prefer living in front of the mirror will always believe that they are the center of attention."

"There was a reason for Guttenberg's remarkable popularity: He was the flawless knight in shining armor relative to the rest of the country's politicians, whether friend or foe. ... The son of nobility ... he seemed the perfect example of the longed-for apolitical politician, one standing above the fray of party politics and focused solely on the task at hand while displaying common sense and popular virtue."

"Guttenberg and his defenders in the conservative camp underestimated from the very beginning how much the plagiarism affair had to do with the German mainstream. It was never about just quotation marks and footnotes. It was about truthfulness, credibility, setting an example, pride in one's own achievements, respect for the intellectual property of others, the trusting relationship between teachers and their pupils and many other values that go far beyond the world of academia. Chancellor Merkel's attempt to hold on to Guttenberg by attempting to apply different standards to the political world than to the academic world was the kind of mistake that she seldom makes."

"Cold political calculation led Merkel to try to use Guttenberg's uncanny popularity for herself. She, as a Ph.D. holder in physics, as someone married to a university professor, should have known better. She, who along with her Education Minister Annette Schavan, so likes to speak of Germany as the 'country of education,' should have realized that you can't split a person into, on the one hand, an academic who lacks all credibility and, on the other, a distinguished politician on the national stage."

"Merkel has not only disgraced herself in front of Germany's academic elite. She has done nothing less than abandon the conservative foundation of values. She has lost her moral compass."

"The chancellor hasn't just damaged herself. Her entire party has been shaken to its foundation in the last three weeks. The image of Merkel as a chancellor with integrity, one shared by people from all parts of the political spectrum, is history."

"It could have been worse for Germany's conservatives. Imagine that Guttenberg continued to cling to his cabinet position. His plagiarism scandal would have marked three state elections in March -- and not to the Christian Democrats' advantage."

"But things could also have been easier for the CDU, if Guttenberg had confronted the accusations against him from the very beginning. Instead, he preferred to deny what had long since been proven: that he copied large sections of his dissertation. He maneuvered and held on to his position as long as he could. It was a far cry from the credibility and clarity which he himself holds so high. His resignation was long overdue."

"The scandal may have damaged his reputation, but it really damaged the CDU. The party will now have a problem mobilizing voters in the upcoming elections. On the one hand, Guttenberg's many fans will be frustrated because their star has exited the stage. On the other, Angela Merkel, who appeared only concerned about survey results, has repelled parts of her party's voting base: well-educated conservatives who value honesty, responsibility and the principle of advancement by virtue of one's own achievement."

"Guttenberg's political opponents are pleased by his resignation. Their ranks, full of envy, became ever larger. The fact that someone like Guttenberg, who embodied instead of mocking conservative values, was so well loved was a thorn in the side of those who see conservatism as old-fashioned and worthy of disdain."

"Unfortunately, Guttenberg's behavior proved them right. He of all people, a person who appeared to perfectly embody conservative values, violated them. As a result, it will become more difficult in the future for German conservatives to present themselves as a defender of such values." 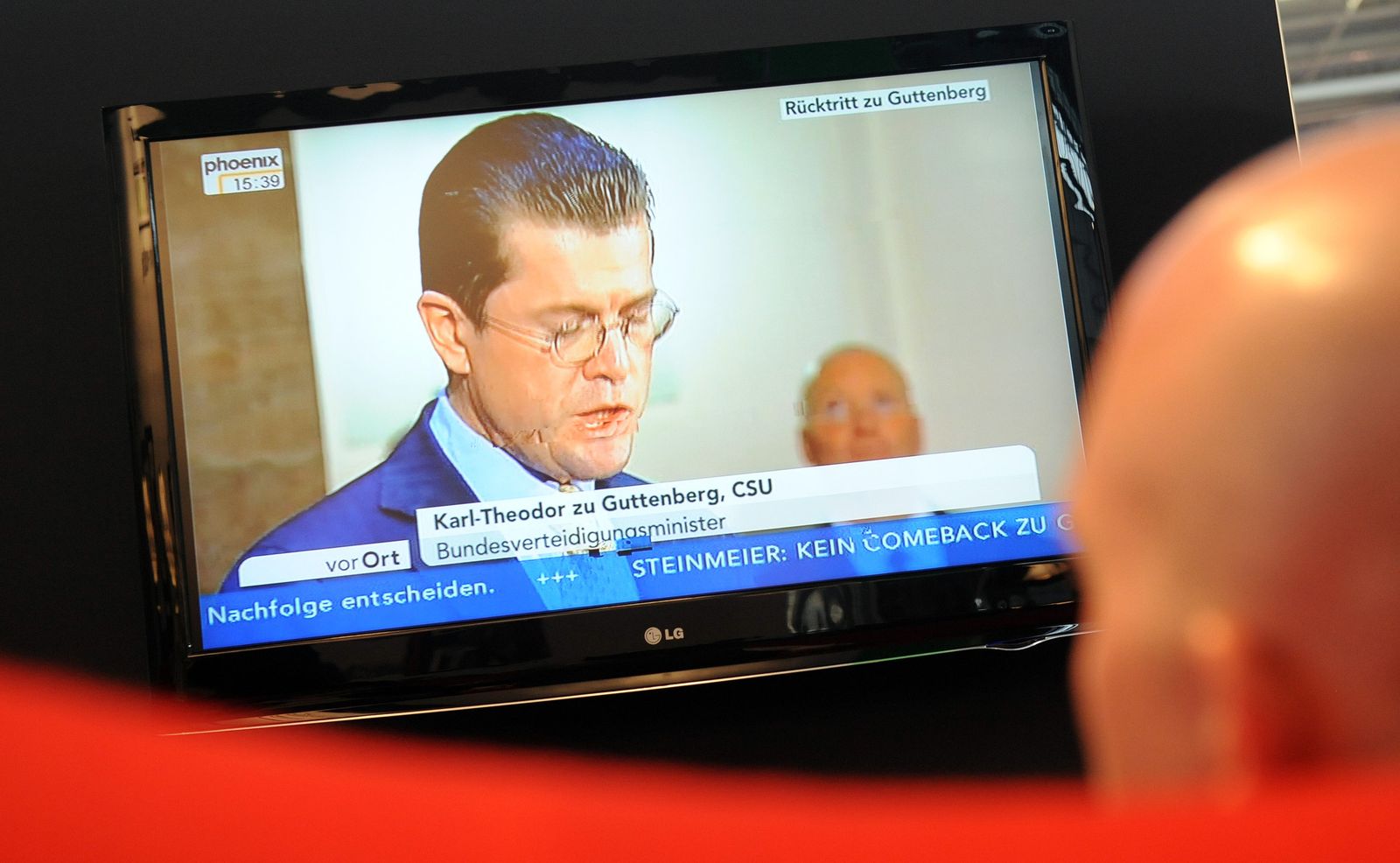