The media grilling has been in high gear for over a week. But on Wednesday, German Defense Minister Karl-Theodor zu Guttenberg faces uncomfortable questions in parliament for plagiarizing parts of his doctoral thesis. Even as Chancellor Angela Merkel's conservatives are throwing their support behind Guttenberg, opposition politicians are branding him a liar and demanding his resignation.

"If Guttenberg can remain in the cabinet as a liar, the democratic system in Germany would change," Thomas Oppermann of the opposition center-left Social Democrats said on Wednesday.

That Guttenberg failed to adequately cite several passages in his 475-page dissertation has been largely proven in recent days. A website devoted to searching through the work for sentences lifted from other sources claims to have found over 150 instances of plagiarism. Guttenberg even appears to have plugged in several pages of material he commissioned from parliamentary research assistants -- without indicating where the passages originated and in violation of rules forbidding the use of such assistants for personal business.

Nevertheless, signs are increasingly pointing to Guttenberg surviving the affair and staying on as minister. He was applauded by conservative supporters at a regional campaign meeting in the western town of Kelkheim on Monday night when he said he would give up his "doctor" title and admitted having made "grave errors" in his thesis on the US and European constitutions, which received top marks from the University of Bayreuth.

Chancellor Angela Merkel has backed him because he is too popular, and hence too valuable to her, to drop. Her center-left Christian Democrats face six state elections this year and could lose power in the rich south-western state of Baden-Württemberg, a CDU stronghold for over half a century, in a vote on March 27.

And surveys indicate that a majority of Germans want the 39-year-old Guttenberg, a baron from one of the country's premier aristocratic families, to remain in his job. German media commentators note that the public seems intent on forgiving him for his transgression because it is enchanted by his illustrious pedigree, his glamorous image and his straight-talking style. He has been tipped as a possible future chancellor.

But commentators say Merkel's decision to support him shows she is more interested in political power than in honesty and credibility. The scandal, they say, has damaged Germany's political culture and could come back to haunt her.

"How can one go on believing such a man in the future, when he testifies on critical events, for example regarding the German army? This is where the chancellor comes in. The fact that she is prepared to keep a liar in the cabinet in order to preserve her balance of power isn't just unworthy of her office. It is a scandal. It is outrageous if the chairwoman of the Christian Democrats says that it doesn't matter what a politician does in other areas."

"Guttenberg's case is a watershed. Now it's official: popularity is more important than credibility. In the end, the chancellor bears the responsibility for this. She is protecting a forger. That is why democracy's adherents shouldn't just be demanding the minister's resignation. With such a value system, Dr. Merkel herself has no place at the head of a government in which voters placed nothing less than their faith."

"Merkel has placed political opportunism above political decency and ethics. Would Karl-Theodor zu Guttenberg still be in his job if he weren't called Guttenberg, but Jung? (Editor's note: Franz Josef Jung, a former defense and labor minister in Merkel's cabinet, who was far less popular than Guttenberg and who resigned over the Kunduz bombing in 2009). And would he still be in his job if it weren't Feb. 23 today, but March 28? In both cases, the answer isn't definitely, but quite probably, no. On March 27 there are state elections in Rhineland-Palatinate and Baden-Württemberg. Things have never been this difficult for the conservatives in the south, and the party has never been so close to losing power in Baden-Württemberg. Nothing must endanger this election victory, and any price will be paid for it."

"Must Guttenberg resign? He definitely should be terribly ashamed. He himself will have to decide what consequences to take; it is a matter of honor. Other, less popular ministers have resigned over smaller matters; but these smaller matters were more closely connected to the post from which they resigned. And so Guttenberg's party colleagues, the chancellor and part of the general public are responding to the accusations with a personality split. They are making a strict distinction between Guttenberg the minister and Gutenberg the Ph.D. student."

Conservative Frankfurter Allgemeine Zeitung implies that Guttenberg should have resigned. It writes:

"It's obvious that the coalition won't drop its miracle weapon without a fight. (…) He is profiting from a general disenchantment with politics and from the public's withdrawal from a world seen as unsafe and confusing into the private sphere, where values such as plain speaking, reliability and 'common sense' play a central role. But even this introspective world needs someone who can take care of the little people and the big issues, and who can make everything right, including Afghanistan. It has been a long time since anyone enjoyed as much public faith in this regard as Guttenberg does."

"A monarch doesn't need a Ph.D. Even for the tabloids, his aristocratic pedigree is quite sufficient. But Germany is still a republic, and plagiarism still amounts to the theft of intellectual property. The chancellor may overlook this for evident reasons, at least in public. But even Frau Merkel can't fail to see the damage that is being done to the cosmos of public values by the operation to rescue the troubled flag-bearer. There will be consequences further down the line. Guttenberg would have done himself, the values he espouses and his party a better service if he hadn't just written a letter to the University of Bayreuth, but to the chancellor as well."

"The fact that Guttenberg appears to have retained his hero status may be less due to his personality than to his aristocratic heritage. Even though the German people are republican by nature, or at least staunchly petit-bourgeois, they still seem to attach a divine authority to aristocrats. In former times the monarch could sin as much as he wanted, it didn't damage him because he was not judged by human standards." 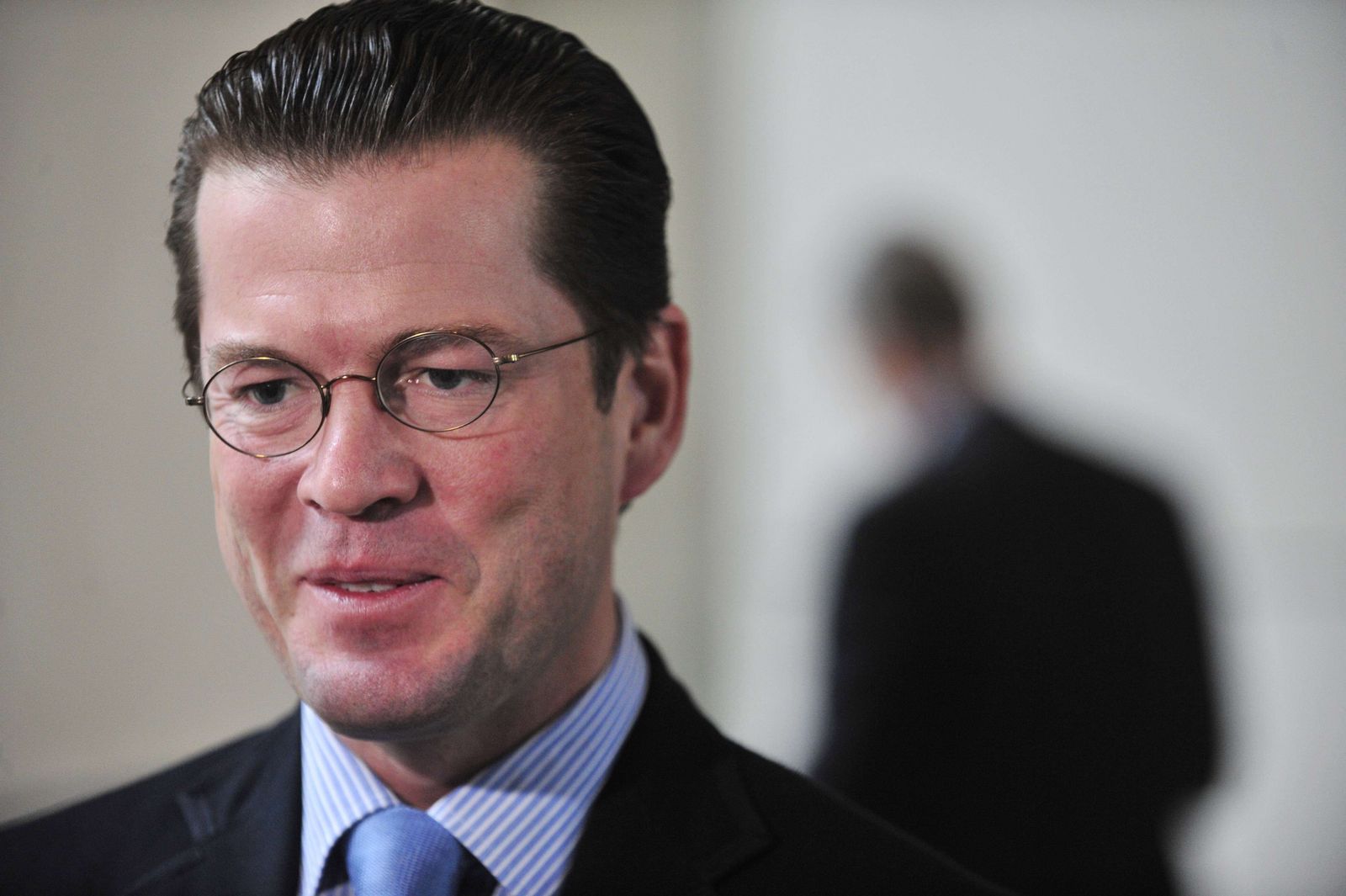 Defense Minister Karl-Theodor zu Guttenberg: His popularity may have rescued him.