With their economy now officially in recession and business confidence sagging, Germans of all political stripes are calling on Chancellor Angela Merkel to include tax cuts as part of the government's response. Merkel's resistance is splitting her ruling center-right Christian Democratic Party (CDU), but she is standing firm.

At issue is a philosophy of fiscal discipline. Speaking about Germany's stimulus programs in the 1960s and 1970s, Finance Minister Peer Steinbrück recently said: "Government debt rose, and the downturn came anyway." 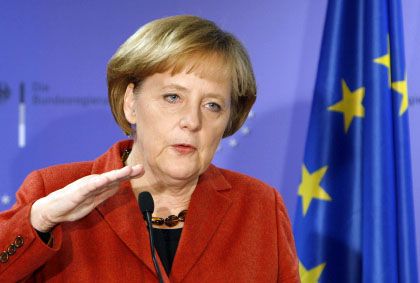 Chancellor Merkel seems to have the same reservations in this season of crisis. On Monday, she voiced her opposition to any lowering of the country's sales tax (VAT). Although she did approve a roughly €5 billion ($6.25 billion) stimulus package three weeks ago, she has steadfastly rejected calls from within her own party and its Bavarian Christian Social Union (CSU) sister party as well as from business leaders to cut taxes. In fact, she has said that she doesnt even want to consider such proposals until after the general election in September 2009, a year which she has already said will be " a year of bad news."

The loudest calls for tax cuts have been coming from the CSU. The party's new leader, Horst Seehofer, has said that the economic downturn is too severe for Merkel's strategy of fiscal discipline. "In such a difficult situation, we cannot rescue the country by saving it to death and aggravating the crisis," Seehofer told the Bild am Sonntag newspaper last week.

And Seehofer has been joined by a chorus of economic heavy hitters including: Ludwig Georg Braun, the president of the German Chambers of Commerce and Industry; Josef Schlarmann, who heads the small and medium-sized business alliance of the CDU/CSU; Laurenz Meyer, the CDU's former general secretary; and Michael Fuchs, a CDU economics expert.

Perhaps the loudest voice of dissent has come from Economics Minister Michael Glos -- also of the CDU party -- who has said that: "The economy would be helped were we to promptly sink taxes for those with low and medium incomes." Glos has even called on Germany to abandon its climate change goals lest they prevent the economy from quickly getting back on its feet.

Still, some voices of support have risen above the cacophony of protest, including those of Christian Wulff, the governor of Lower Saxony, Hamburg mayor Ole von Beust and Hesse Governor Roland Koch. Koch expressed his worry "that many people would prefer to run through the countryside again showering money around" and that tax policies should not be "dealt with in a panicky way."

German commentators on Tuesday generally back tax cuts and argue that Merkel's lack of action can be equated with a lack of leadership.

"The impression that the chancellor and the CDU give off can be easily summarized: The conservatives lack political authority...The party has no economic experts with an aura of uncontestable expertise. It is now becoming apparent what the pessimism in the union had already foretold: In this crisis, Merkel's strategy of relying on her abilities, her swiftness and her political instincts is quickly reaching its limits."

"(Merkel) has failed to maintain policy discipline within the CDU. With good reason, some like to accuse her of not being a good team player... Then there is the CSU, which seems bent on revenge. Open attacks against climate protection policies closely followed by calls for tax cuts -- it looks like a strategy more fit for a war of attrition."

"Angela Merkel is facing the biggest test of her term in office. In the debate on the budget and at the upcoming party congress, a couple of nebulous mottos will no longer suffice. There is already talk about her plans to announce a 'mission' for Germany. But things don't need to be so melodramatic. The chancellor just needs to have a plan for how she would like to lead the country out of the crisis. And she has to publicly fight for this plan. That's what you expect from a head of government."

"When we talk about private consumption in Germany, we are still talking about more than have of the country's annual economic output. But because we are in Germany, being stubborn is constantly confused with being true to your principles and, likewise, political calculation with regulatory policy. Yesterday, Chancellor Merkel repeated her opposition to lowering either the VAT tax or income taxes. Unfortunately, her position has less to do with fearing a debt economy than it does with party politics: Angela Merkel fears the wrath of the CSU."

"Despite all the pressure, Merkel had refused requests from her economics minister, CSU member Michael Glos, to lower taxes. Having done so -- at least as far as the CSU sees it -- means that she shares in the responsibility for the CSU's losses in September's state elections. Merkel's reading of the situation now is that if she changes her mind and drops her resistance, the CSU will view it as an admission of guilt."

"The government should take its own words seriously. Just recently, the chancellor stood before parliament and said: 'In the past few weeks, the global economy has faced the hardest challenge since the 1920s.' Today, we must not repeat the mistakes that were made then by a government that was far too passive."

"The easiest way to (respond to the current economic crisis) would be to tinker with some elements of the tax system. Why not lower taxes on salaries and income in a perceptible but limited way and have a reduction in the VAT tax, like the one in Great Britain? The free-rider effects would be small, and tax payers would still be able to choose how to spend their money. But, instead of doing that, our national leaders are focusing on interventionism and renationalizing the banking industry. In this case, it would appear that all taboos have been broken. "

"The rhetoric coming from the government and its floundering murkiness is the opposite of leadership. Certainly they shouldn't be understating things, but neither should they be allowing confidence evaporate. The German economy is by no means as endangered as the speeches make it out to be. Deliberately spreading alarmism risks bringing about a self-fulfilling prophesy."