After eight months of in-fighting, stalling and setbacks, Chancellor Angela Merkel's government finally took a landmark decision on Monday, announcing the country's largest package of budget cutbacks since World War II. It plans to cut the budget by a total of around €80 billion ($95 billion) by 2014 to meet the requirements of the EU's stability pact and of the so-called "debt brake" enshrined in the German constitution.

The savings involve cuts in social spending, including reductions in allowances for the long-term unemployed. There will also be several new business levies including an air travel tax, a tax on nuclear power station operators and a financial transactions tax, although the latter would only be introduced if it were agreed at a European level.

The government also plans to axe 15,000 jobs from federal payrolls by 2014, and to scale back several tax subsidies, including reducing the number of exemptions to Germany's environmental tax.

The opposition Social Democrats, Greens and the Left Party have attacked the measures as socially unfair and complained that the coalition has spared its core base of wealthy and middle-income voters much pain. The top rate of income tax has been left unchanged, as has the tax on inheritances. And the deeply controversial tax break for hotel owners pushed through at the start of the year by the pro-business Free Democrats, the junior partners to Merkel's conservatives, has also been left untouched.

The general secretary of the opposition Social Democrats, Andrea Nahles, said the measures were "extremely cowardly because the people who are to blame for the crisis are spared, while those in need are made to pay."

The president of the German Confederation of Trade Unions (DGB), Michael Sommer, said trade unions would organize mass protests against the cuts. "The burden on the long-term unemployed is being increased to an incredible extent," Sommer said. "This flawed savings package will meet with an appropriate response from the unions," he said. "The burden is being put on the weak shoulders, not the strong ones."

Not a Fresh Start for Merkel

German media commentators say the cuts are a necessary first step to getting the budget deficit back below the limit of 3 percent of GDP stipulated by the euro zone's stability pact. The commitment to budget restraint is an important signal to highly-indebted euro-zone members such as Greece, Portugal, Spain and Ireland, commentators say. On closer inspection, however, the cuts aren't particularly ambitious and don't amount to the fresh start that Merkel's beleaguered government desperately needs, they argue.

"This package has the enormous advantage that it probably won't choke off the recovery which is only just beginning. At a time when the southern European countries are drastically cutting their budgets, it is all the more important that Germany, as the largest European economy, keeps growth going. That will also help the euro. Financial markets at the moment are paying close attention to whether the euro-zone states are restructuring their budgets. But they get just as nervous if there are signs that savings measures may threaten the economic recovery."

"The government still faces a truly gigantic task, namely implementing all these measures. And the eternally nervous financial markets will keep a very close eye on whether the coalition's plans are watered down as they are implemented. Initial reactions give a taste of how difficult the coming months will be for Merkel's government. Business federations, airlines and power companies are up in arms, as are welfare groups, the civil service trade union and opposition parties."

"In terms of volume, the savings package meets the requirements. It will reduce the government's gigantic budget deficit step by step in the coming years to an acceptable level, and the requirements of the constitution and the EU's stability pact will be fulfilled -- at least on paper."

"Chancellor Merkel and her deputy Guido Westerwelle, like so many of their predecessors, shunned a systematic review of all subsidies, however, even though such a review is urgently needed."

"The second major problem of the savings package is the lack of social balance. It mainly hits the less well-off  Savings packages of this size are only accepted by the public if they are broadly fair. Against this background, the planned bank tax of just €2 billion a year can only be seen as a joke or even an insult. And there is no growth strategy. Vice Chancellor Westerwelle, for example, could have worked his cherished tax cuts for middle-income groups into the package -- if he had had the courage to raise taxes for other groups in return, for example for top earners or for people with large inheritances."

"If you demand tough sacrifices from parents, the long-term unemployed or civil servants, you can't just throw a billion-euro tax gift to hotel managers. The government should have begun by reversing this ridiculous policy, which it introduced at the start of the year. But it didn't have the strength to do so, or to significantly raise inheritance tax to international levels, or to raise top-level income tax rates. Merkel evidently didn't want to provoke the embattled FDP any further. But if you make generous gifts to lobby groups and decide to refrain from tapping fresh sources of tax revenue, you can't expect support from the public. ... Overall, the savings package seems fainthearted and unbalanced."

"This savings package is disappointing. The reduction in subsidies, originally a much-vaunted issue, played virtually no role. A few tax exemptions for energy taxation will be removed, to the tune of just €1 billion. Given financial subsidies and tax breaks totalling around €140 billion per year that Germany still allows itself, that's a laughable sum. The coalition has fallen far short of what it could have done."

"The savings packet isn't really big. The consolidation will amount to €11.2 billion in the coming year. That is less than 1 percent of the total government spending predicted for 2011 by the leading economic research institutes. Secondly, and much more importantly, the measures will not achieve the all-important goal of putting state finances on a more solid foundation over the long term. The 'ecological air traffic levy' would have been imposed in a few years' time no matter what, in line with an EU guideline. So in the long term it won't result in additional unplanned revenue for state coffers. And the package contains the financial transactions tax, even though it has already been shelved in international negotiations."

"The savings package marks the real beginning of the coalition's work in two senses. After spending more than half a year stumbling around on key issues and waiting for the North Rhine-Westphalia state election, the government finally has a program. But the work is also just beginning, in the sense that the decisions in principle have to be fleshed out into concrete action. That will lead to major rows once the budget plans have been drawn up. The rapid decision on key points was only possible because the coalition had its back to the wall. The agreement is also likely to have been accelerated by the euro crisis, which showed the government and the public how precarious the situation -- meaning the stability of the currency -- really is."

"For the first time in eight months, the center-right coalition has made a determined decision. The savings program is sound. It scraps labor-market programs in areas where cutbacks don't really hurt anyone. It cuts additional benefits for groups that have often been among the beneficiaries of government measures over the last five years. It taps civil servants because they have safe jobs despite the crisis."

"The direction is the right one. The government is saving money on items it no longer wants to afford and that can only be financed through debt. Every private individual would do the same with his own finances. The program isn't heartless, contrary to what the opposition parties are saying. " 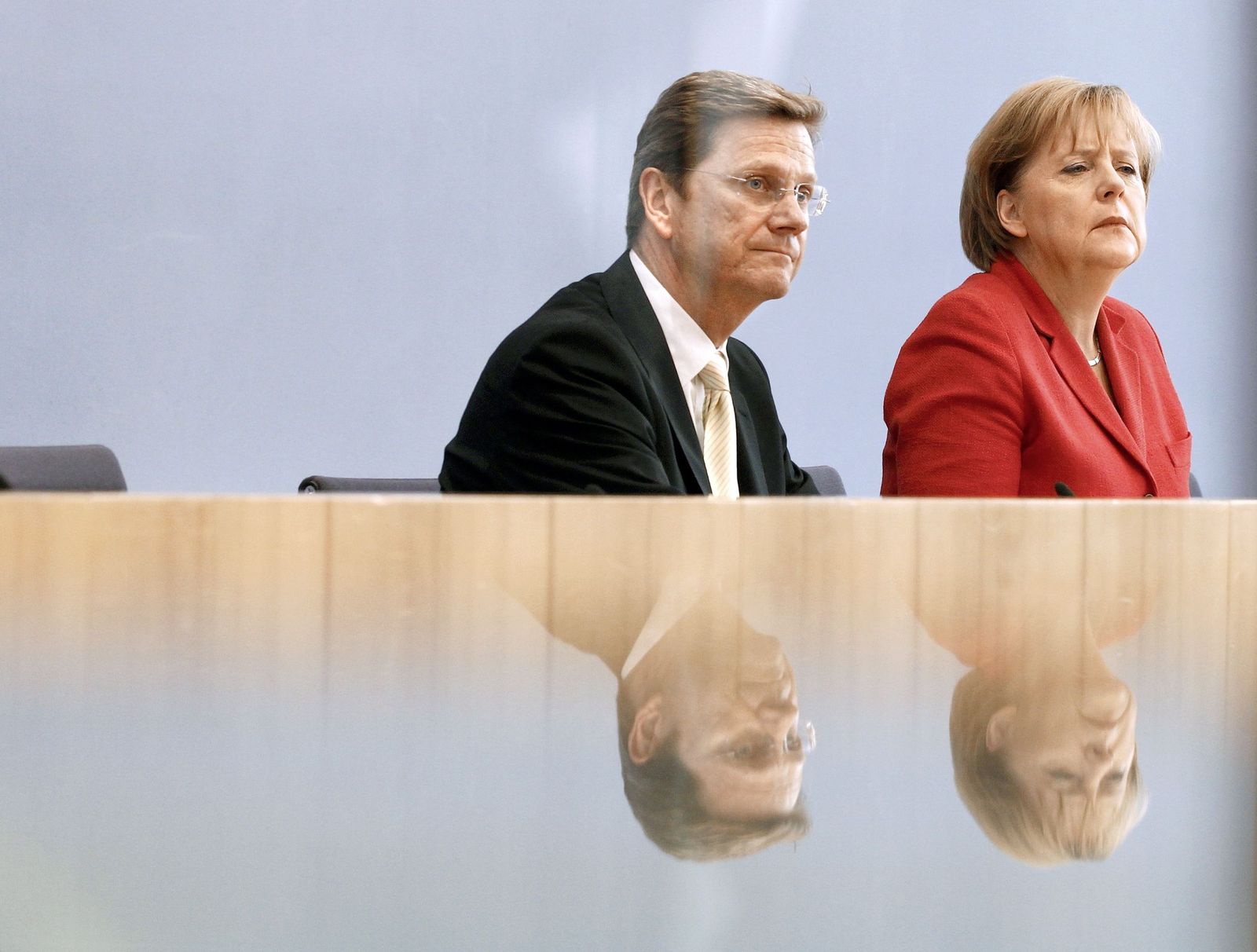 Chancellor Angela Merkel and her deputy, Guido Westerwelle, announced the austerity program at a news conference on Monday.