All is not well in Germany's ruling coalition. The business-friendly Free Democratic Party (FDP) continues discussing the possibility of an "orderly bankruptcy" and exit from the euro for Greece despite urgent discouragement from their senior coalition partners, Chancellor Angela Merkel's conservative Christian Democrats (CDU).

The attention is focused on FDP leader, Vice Chancellor and Economy Minister Philipp Rösler. He has said that forcing Greece out of the euro should be considered as a means to protect the other euro zones, if only as a last resort.

In a piece for the conservative Die Welt on Monday, Rösler argued that "there can no longer be any taboos" in the debate over the euro crisis, including, if necessary, "an orderly bankruptcy of Greece, if the required instruments are available."

But his comments go against Merkel's policy of avoiding a discussion about Greek default to prevent turbulence on the markets. The chancellor told Berlin public radio station RBB on Tuesday that an uncontrolled bankruptcy of Greece could have a domino effect on other countries, and must be avoided at all costs. "What we don't need is disquiet on the financial markets. The uncertainties are already enough," she said.

There is a growing suspicion, however, that Rösler's insubordination may be a ploy to help his party claw back lost votes. The FDP has suffered massive losses in state elections this year, most recently in Mecklenburg-Western Pomerania earlier this month where they lost all seven of their seats in the state parliament. Continued membership in the ruling coalition is widely seen as a root cause for their plummeting poll numbers. Going against Merkel's unpopular support of Greece may be the only way the FDP can appeal to the electorate.

And Rösler has found plenty of support from within his own party. Christian Lindner, the general secretary of the FDP, told the Financial Times Deutschland on Wednesday that long term market stability would not be achieved by taking "a vow of silence."

Sabine Leutheusser-Schnarrenberger, justice minister and FDP deputy chairman, told the Ruhr Nachrichten that Rösler has "started a debate that looks to the future." She added: "We need an instrument for the future if euro countries continue to get involved in dramatic debt and financial crises."

Even the CSU, the Bavarian sister party to the CDU, has been willing to discuss a Greek default. CSU leader Horst Seehofer has spoken out in favour of an orderly insolvency in Greece.

But political opponents have been quick to attack Rösler for his comments. Greens parliamentary leader Jürgen Trittin on Wednesday called for the FDP leader to be thrown out of the government. Speaking to the Passauer Neue Presse, Trittin said he wondered how long Merkel wanted to carry on watching the "amateurish goings on of the FDP gang." He added: "The chancellor has the policy making power; she must release Mr. Rösler."

German commentators Wednesday were critical of Rösler and the FDP, with one editorial going as far mocking the situation.

"Whether Greece should remain in the euro or not has become a question whose answer is the subject of regular polls by the smaller coalition partners, the FDP and the CSU. The grand project of European unity has degenerated into a shelf warmer, which it is hoped will add a few tenths of a percent at the next state election."

"This government has fallen so far that you almost yearn for Helmut Kohl. He represented his core values, at least in Europe, no matter which way the wind was blowing. Angela Merkel's answers to the problematic Europeans, however, are purely tactical in nature. Instead of reminding the troublemakers that the countries of our continent can only make progress together, instead of standing her ground on the idea that solidarity must be a European value, she sheepishly warns of unrest on the financial markets."

"The example of Europe shows that this CDU/CSU-FDP coalition is a pure marriage of convenience. Its main task is to survive the next two years until the general election. Unfortunately, there are fears that this project will be a success, even if it is likely to remain the only one."

The Financial Times Deutschland jests that rather than a Greek exit from the euro as Rösler suggested, Athens has actually called for the FDP to be thrown out of Merkel's coalition instead:

"Chancellor Angela Merkel yesterday objected to Greek demands for the FDP to be excluded from the governing coalition. Athens had argued that the recent rescue packages for the coalition partners had all failed. The FDP was forced to concede at the weekend that their vote deficit will be even higher than expected for the year. Only the FDP's exit from the coalition would offer it the opportunity for a new beginning: They can then reintroduce opposition rhetoric, downgrade and thus become competitive again. 'What we do not need is unrest,' Merkel countered. 'Everything possible must be done to hold together the government politically."

"European Parliament member Elmar Brok (CDU) accused the Greeks of creating a self-fulfilling prophecy for the FDP. 'One thing is clear: The demise of the FDP is the worst and most expensive solution for the government,' he said. Compulsory participation of private voters is impossible, since that could only take place voluntarily. Even an orderly trust bankruptcy of a political party is out of the question, according to regulations. Moreover, this would lead to incalculable consequences on the electoral markets. Speculators would then bet on the decline of other coalition parties, the poll rating of government members would be downgraded."

"Philipp Rösler is a man whose political liability now weighs too heavily, measured by his experience, perhaps also by his talent and probably even by his ambition. Rösler is the vice chancellor of a rotten coalition, economics minister in ominous times and head of an FDP in a battle for survival."

"With his newspaper article on the euro crisis, Rösler has now embraced the problem that appears to him to be the most urgent: The FDP. The state election in Berlin takes place in less than a week. What amount of political credit he will retain after the coming Sunday is still very uncertain."

"The tactical calculations of the FDP leader are clear: He firmly believes that his party was on the upswing ahead of the election in Mecklenburg-Western Pomerania because of its tough stance against euro bonds, until the debate over the abilities of Foreign Minister Guido Westerwelle ruined everything. Consequently, Rösler had to go a step further and, like (former defense minister Karl Theodor zu) Guttenberg once did, even manifest skepticism over his own government's actions. But it could happen to him that -- now without the upward momentum -- the debate about his abilities will ruin everything." 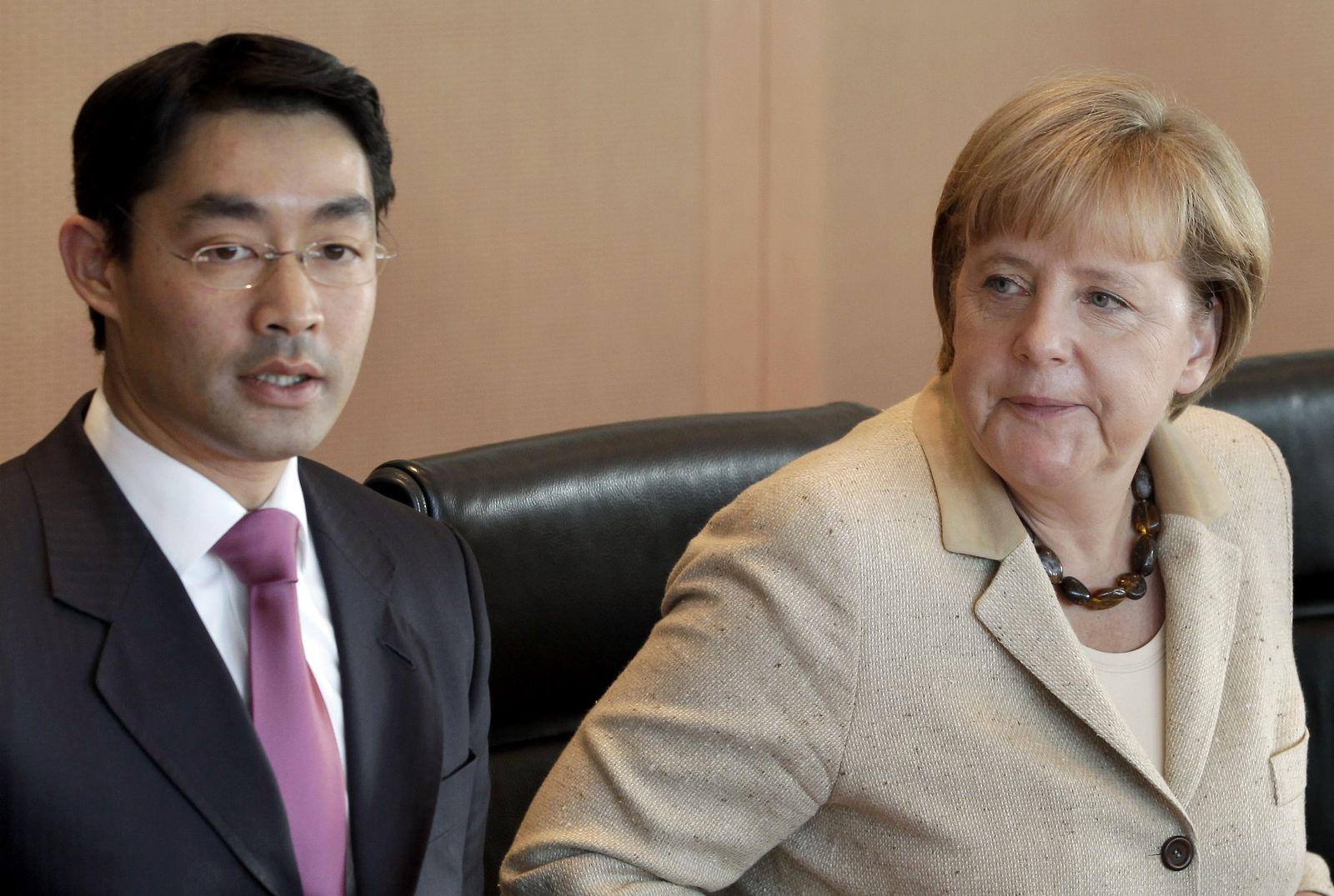 Merkel and Economy Rösler before the weekly cabinet meeting in Berlin on Wednesday.