The decision came quickly. Even as workers at the stricken Japanese nuclear power plant at Fukushima struggle to regain control of reactors there, German Chancellor Angela Merkel announced a three-month moratorium on the extension of the lifespan's of Germany's nuclear facilities. On Tuesday, she announced the temporary shutdown of seven of the country's 17 reactors.

"Everything must be placed under review," she said at a Berlin press conference. "There must be no taboos."

The move has been widely criticized by opponents, who see it as an election ploy in a month when voters in three German states will be going to the polls for important regional elections. It comes on the heels of a major controversy surrounding Merkel's former defense minister, Karl-Theodor zu Guttenberg, who stepped down amidst allegations that he plagiarized large portions of his doctoral dissertation. 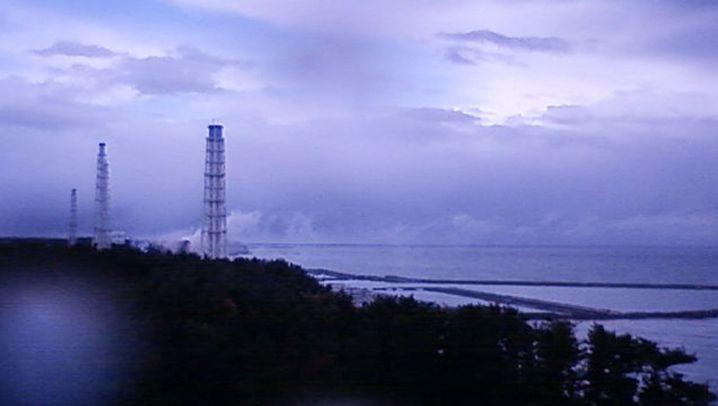 More to the point, it represents the kind of major policy shift that Merkel has been at pains to avoid during her stint in the Chancellery. Last fall, Merkel's governing coalition, made up of her conservatives in tandem with the business-friendly Free Democrats, pushed through a controversial plan to extend the lifespans of German nuclear reactors by an average of 12 years. The move revived the country's lively anti-nuclear protest movement, which had been largely dormant since Merkel's predecessor, Gerhard Schröder, passed a law in 2002 calling for nuclear power to be phased out by 2022.

At the time, Merkel and many of her political allies insisted that German nuclear reactors were safe. Opposition leaders have pointed out this week that the move to shut down several reactors pending an extensive safety review calls those claims into question.

The issue filled German editorial pages Wednesday, with some commentators finding Merkel's move hasty and impractical, and others seeing it as an opportunity.

"The last time Angela Merkel spoke of wanting to review a political problem 'without taboos,' the issue was compulsory military service. Shortly afterwards, conscription was abandoned. Now the chancellor ... has declared that she wants to review nuclear energy policy 'without taboos.' The extension of reactor lifespans has been suspended and one can assume that it will never again be the same as it was in the law passed by the Merkel's government last fall. Merkel breaks taboos like others crack nuts."

"Such a rushed policy change is rare… Opponents of nuclear energy may decide the move is a case of better late than never. But an assessment of Merkel's about-face revolves around the following question: Is it a courageous policy change bearing witness to her sense of political responsibility? Or does it represent a loss of credibility, because that which was described yesterday as being impossible is all of a sudden possible today?"

"After the state elections, Merkel should pause. Should she continue on as the kind of chancellor who changes with the mood of the people, then opponents see the likelihood of her reelection as slim due to the damage done to her credibility."

"In Japan the danger of a nuclear catastrophe is by no means averted. But it is still surprising that on the other end of the world, in Germany, in the middle of Europe, almost half of the nuclear power plants will be taken off the grid. The reaction in no other western industrial nation has been as frantic. The kind of emotional agitation seen in Germany has been absent from the debate in America, Great Britain and France. Why Germans are so fearful of nuclear power remains a mystery."

"Nuclear energy had become an important proof of national independence, because of the desire to slow down imports of oil and gas from politically unpredictable nations. But the protests continued. As such, atomic energy was seen only as a 'bridge technology.' But where when will this bridge hit the far shore? Renewable energy's 17 percent share of the mix is substantial, but is not enough for an industrial nation."

"How quickly can the share be increased, along with storage and supply networks? What replaces nuclear energy? Must we again buy expensive Russian gas and remain dependent on Saudi or Libyan oil? How high will the energy prices rise? What if economic growth is slowed?"

"A complete nuclear phase out cannot be hurried. Those wishing to set an example must also remain sober. The questions are serious. And they take time to answer."

"The federal government must quickly introduce a convincing new energy plan that is realistic and reliably opens the way for decades of secure supplies of affordable energy. A shift in focus away from climate policy towards a policy focused on needs is unavoidable. Nothing is without alternatives, including nuclear energy. But every alternative has its price. Despite the catastrophe in Japan, fear and emotion are not good counsel. Responsible politics is bound to reason, even on the eve of state elections."

"A week ago some still considered the stepping down of a federal minister as the worst case scenario. But on day five of the new calendar -- after Fukushima -- the debate over the fall of [former defense minister Karl-Theodor zu] Guttenberg seems like an anecdote from the good old days, in which one could get agitated about a cabinet shuffle."

"Politicians like to talk about watershed moments. This time it is not an exaggeration. Technically, it would certainly be possible to upgrade and retrofit even older German nuclear power plants with a large financial commitment and the controversial question as to how 'safe' they would then be."

"But politically, the peaceful use of nuclear energy in Germany is over once and for all. In the face of the terrible images from Japan, the governing coalition did not have much choice other than to take the headlong approach."

"The current and future federal and state governments must radically alter Germany's energy policies in short order. And they must do so without jeopardizing Germany's energy security and its ability to compete."

"To be sure, Merkel's moratorium is too vague and non-binding. And the loftiness of the government's motives is also doubtful. But the chancellor's step shows that the democratic system is working. It is proof of the strength of the German anti-nuclear movement that this government is now so fearful of its power to mobilize, that it has been forced to retreat. Past protests were not in vain."

"The fact that the anti-nuclear movement was able to get tens of thousands of people onto the streets (eds. note: in a Saturday demonstration), convinced Merkel's government that staying the course was not an option. The pressure must be kept up -- and if it is, there can be no return to a pro-nuclear course."

"Merkel justified her move by noting that developments in Japan are a turning point in the history of technology -- and that, independent of the elections, it is about responsibility in the face of an unprecedented situation. The opposition immediately scoffed at this justification, and rightly so. Merkel's hurried decision is aimed at cooling tempers before state elections.".

"And the realignment is also a first-class embarrassment, because until now the nuclear plants that have now been switched off were supposed to be safe -- so safe, in fact, that their lifespans had been extended." 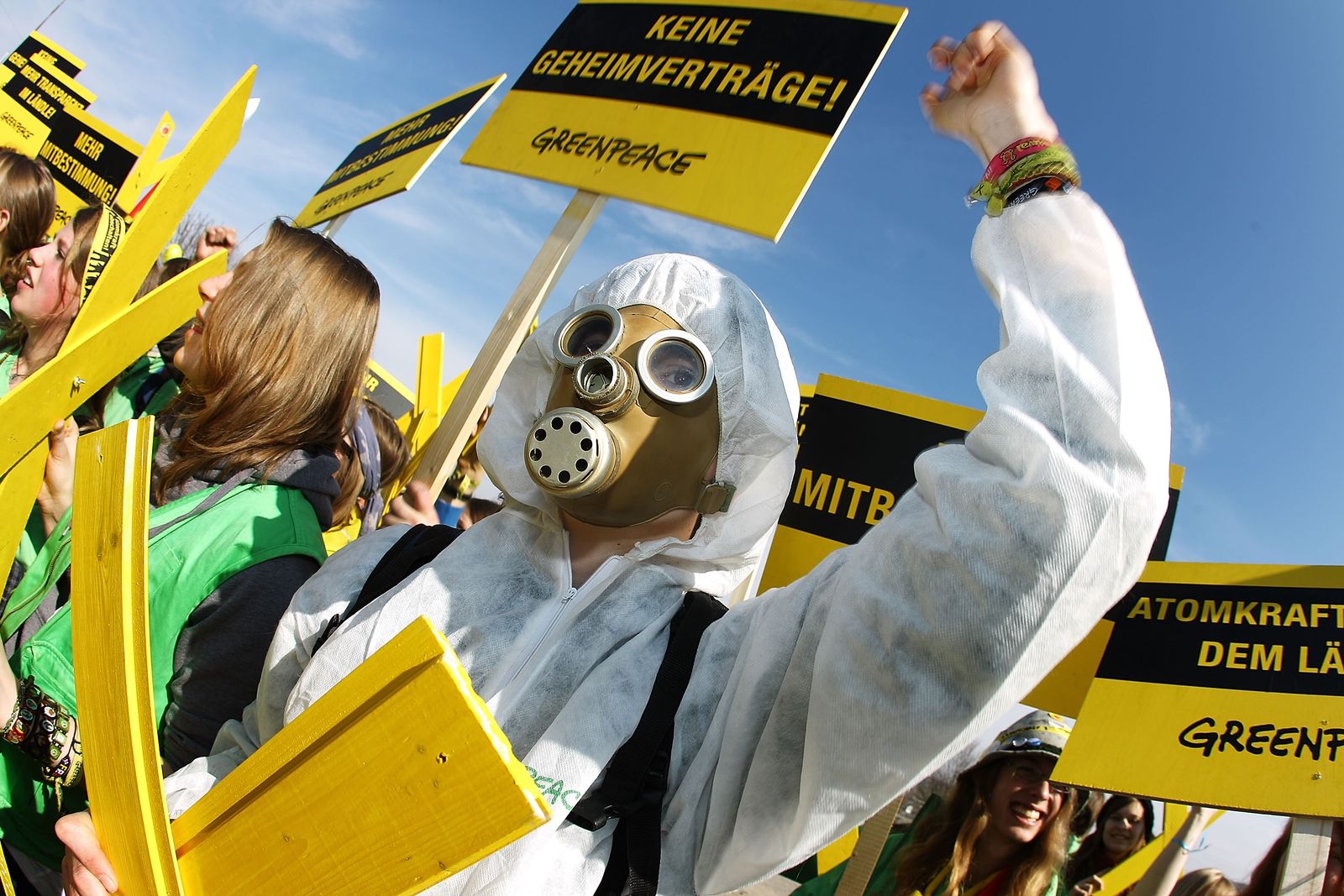 Anti-nuclear protestors formed a human chain in front of the Neckarwestheim nuclear power plant in southwestern Germany on March 12.