German Chancellor Angela Merkel almost lost the 2005 election because she decided to be honest and announced she would hike the value added tax to cut the budget deficit if she got into power. That pledge, combined with her lackluster performance in the campaign, whittled down her respectable lead in opinion polls and ended up forcing her conservatives to share power with the rival center-left Social Democrats for the last four years. 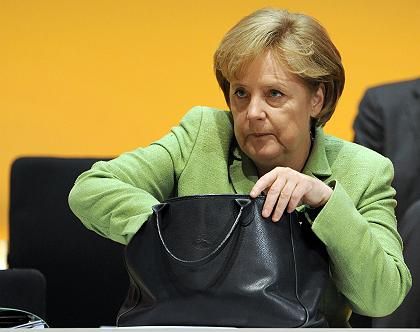 Merkel is rummaging around for €15 billion in tax cuts as she prepares for the September 27 election.

Merkel has learned her lesson and is now pledging to cut taxes by €15 billion if she wins a second term in the September 27 election. Her conservative Christian Democrats (CDU) and their Bavarian sister party, the Christian Social Union (CSU), agreed on Sunday to put tax cuts in their joint campaign manifesto, and to rule out tax hikes, in a move that makes her re-election even more likely.

But media commentators say the manifesto, which is due to be passed at a joint party congress of the CDU and CSU on Monday, risks denting Merkel's credibility at a time when the federal budget deficit has ballooned to its highest level since World War II as a result of the financial crisis. The draft budget for 2010 envisages a deficit of €86.1 billion, more than twice the previous record reached in 1996, because of massive stimulus programs, bank rescue initiatives, state-sponsored corporate bailouts, falling tax revenues and surging welfare payouts in the country's deepest recession since the 1930s.

But legal experts say tax cuts could be in breach of the German constitution, which sets a limit on government debt. And economists say it will be impossible to get the burgeoning government deficit under control without hiking taxes at some stage, and that tax cuts are barely feasible. "I think what's being promised by the conservatives now is unrealistic," Stefan Homburg, an economics professor at the University of Hanover, told Deutschlandfunk radio on Monday. "We have just received a financial plan from the federal government that estimates public spending in the years through 2013 will be far higher than last year and that revenues won't rise in that period. That will result in gigantic deficits and something will have to be done to deal with those deficits."

The conservatives' 63-page manifesto says nothing about how the planned tax cuts, which include cutting the bottom level to 12 percent from 14 and lifting the tax threshold for the top tax bracket from €52,552 to €60,000, are to be financed. Merkel and CSU leader Horst Seehofer made plain at Sunday's meeting that they were prepared to run up fresh debt to ensure taxes could be cut. Merkel said economic growth mustn't be stifled and added: "There won't be a tax increase with me in the next term."

However, the conservatives have refrained from setting a date for the cuts.

Media commentators from left and right said on Monday that Merkel was risking her credibility with the tax cut pledge.

"She has chosen tax policy as a focus and thereby thrown the spotlight on an issue that is bound to make her look dubious. She spent more than three years opposing tax cuts by arguing that the federal budget couldn't cope with it. Consolidation became the trademark of the coalition. And now of all times, when public debt is soaring to immeasurable levels, she's promising billions in tax cuts.

"In the 2005 election campaign Merkel talked about hiking value added tax because she wanted to remain credible. Today she has to live with the fact that her pledge to cut taxes doesn't make her look particularly convincing."

"The Americans distinguish between two types of politicians. Barack Obama is the type who takes the lead, who tries to shape the future of his country and fights to rally the majority behind his plan. The other type tests the waters -- examining the public mood and adjusting policy accordingly. Angela Merkel is that type. If the Germans remain a people of 'water testers', Merkel will have really good chances in the autumn."

"The tax-cutting mantra now being written into the election manifesto originates from a time before the crisis and the record debt, it now sounds hollow, wrong, implausible. What would be interesting now would be to hear creative answers to the question of how Germany can get over the crisis and emerge stronger from it, as Merkel keeps promising. But these answers aren't forthcoming."

"We shouldn't pretend that the huge budget deficits will disappear of their own accord. The necessary consolidation of the state finances won't succeed without increasing the public burden either through increasing taxes or cutting public services at all levels. That's why promising general tax cuts in the coming four years seems deeply dishonest to politically aware citizens."

"It's true that honesty didn't pay off for Angela Merkel last time around. Her announcement that she planned to hike value added tax to consolidate the budget almost cost her the election victory four years ago. But the reverse conslusion that she'll get any further with unconvincing pledges could really backfire."