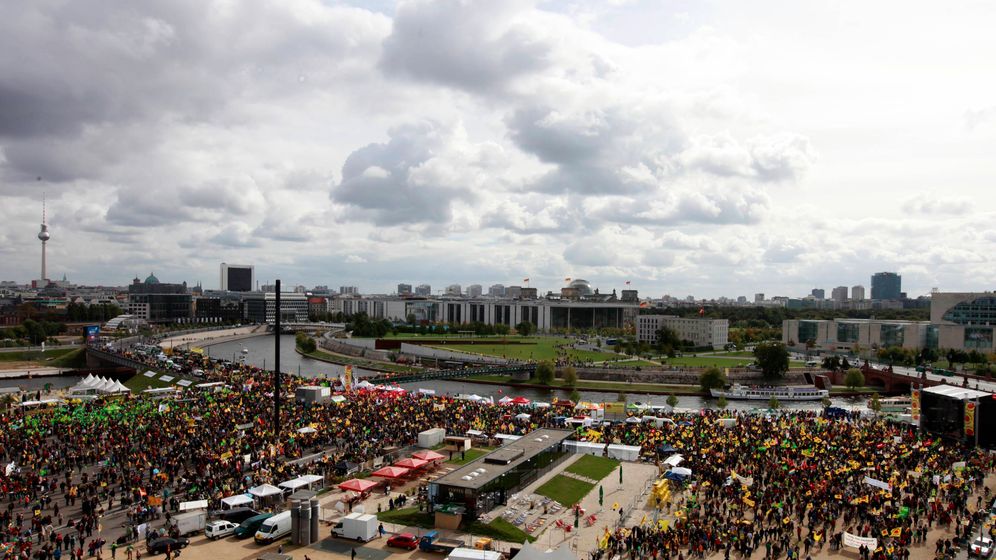 Tens of thousands demonstrated in central Berlin on Saturday against plans by the government to extend the lifetimes of Germany's 17 nuclear power stations by an average of 12 years beyond the originally planned phase-out in 2021.

Organizers said the protest drew 100,000 people and was the biggest of its kind in Germany since the Chernobyl disaster in 1986. Police put the figure much lower, at around 40,000 according to initial estimates.

There were many veterans of Germany's anti-nuclear movement from the 1970s and 80s armed with vintage banners, but thousands of young people joined in as well, along with many middle-of-the road Germans who had never been at a protest before. Opposition party leaders joined the peaceful march around Berlin's government district, including Sigmar Gabriel, chairman of the center-left Social Democratic Party (SPD), and the heads of the Green and Left parties.

Protests against the extension of reactor lifetimes were fuelled by recent opposition allegations that the German government had made a secret deal with power companies to limit safety costs as part of the lifespan extension. Chancellor Angela Merkel's government denied the accusations. Merkel, who is the head of the conservative Christian Democratic Union (CDU) party, says nuclear plants need to remain operational longer to safeguard energy supplies in coming decades and keep power affordable while Germany builds up its renewable energy capacities to meet its carbon emission targets.

Opposition parties and environmental campaigners have accused Merkel's coalition of conservatives and pro-business Free Democrats (FDP) of caving in to the energy companies and of putting public safety at risk in order to gain windfall tax revenues from keeping the reactors online longer.

In an interview with SPIEGEL ONLINE published on Monday, Gabriel called for a national referendum on extending the lifespans of the country's nuclear power plants. "Angela Merkel's nuclear deal is driving people into the streets because it is a stimulus program for political disaffection when the head of a government cuts a backroom deal with four energy bosses that's worth hundreds of billions of euros and safety issues for old nuclear plants are sorted out on the side," Gabriel said. "Those dealings should all be public. ... It would be best if the people could vote on the lifespan extension in a referendum."

German media commentators say that regardless of whether 40,000 or 100,000 turned up to the demonstration on Saturday, the protest is a strong signal that a broad spectrum of Germans is opposed to extending nuclear lifetimes, and that Merkel would be ill-advised to underestimate the strength of that sentiment.

"The demonstrators weren't just the old veteran anti-nuclear campaigners. ... They also included young people and 'bourgeois' people who may have been demonstrating for the first time. It doesn't matter whether there were 50,000 or 100,000 demonstrators. What matters was the signal. The center-right coalition is trying to ignore it. It points to the majority of people who voted for it last year when it was campaigning for an extension of nuclear lifetimes. Does that mean we should all click our heels and ram in the fuel rods? That won't work. The conservative parties and the FDP aren't pure nuclear parties anymore."

"The government's 'secret deal' with the power companies was the last straw for many. Conservatives too don't like the feeling that the government is letting companies dictate policy."

"A chancellor or party leader who doesn't take seriously that tens of thousands are demonstrating against longer nuclear power station lifespans won't remain in office for long."

"For every demonstrator on the street there are 10 or 20 who stayed at home but agreed with their cause. The majority of Germans want to say goodbye to nuclear power and don't want to be burdened with longer lifetimes by a coalition that is governing pretty miserably. On the other hand, demonstrations these days are less determined than they used to be. It smacked of a mixture between a public viewing event and a street carnival."

"The coalition has maneuvered itself into a dead end in terms of energy policy. Its decision to extend the lifetimes of nuclear power stations is putting social peace at risk."

"(SPD leader Sigmar) Gabriel knows that by positioning himself alongside the anti-nuclear movement he's aligning himself with a strong pillar of Social Democratic policy. And he knows that he doesn't just have the backing of his own ranks, but of a lot of voters as well."

"There is no sign that the centrer-right coalition was impressed. Instead of realizing that opposition to its nuclear policy extends deep into its own voter base, the government is circling the wagons and dismissing the demonstrators as a minority."

"Realistic hopes lie with the opposition parties. A decisive factor is the determination with which the SPD, Greens and Left parties have joined forces with the movement and taken an active part in mobilizing demonstrators."