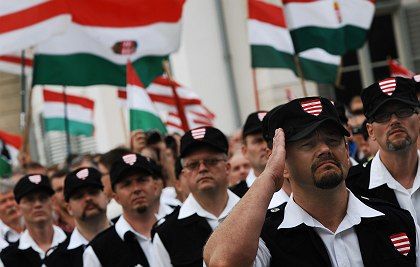 Members of extreme-right "Magyar Garda" or Hungarian Guard are seen during their swearing-in ceremony in Budapest, Hungary.

The founding ceremony for a new Hungarian neo-fascist group attracted a crowd of 3,000 people in Budapest on Saturday. The "Magyar Garda" or "Hungarian Guard" swore in 56 members -- kitted out in uniforms with Nazi-era symbols -- at Buda Castle, the historic seat of the Hungarian monarchy. "The Hungarian Guard has been set up in order to carry out the real change of regime (from communism) and to rescue Hungarians," Gabor Vona, leader of the far-right Jobbik party and co-founder of the guard, said at the event.

The Magyar Garda -- "Magyar means "Hungarian" -- has pledged to train its members in the use of firearms and its members wear a uniform of black pants and vests with white shirts, and a cap emblazoned with a medieval coat of arms, the Arpad Stripes. The striped, red and white symbol is a centuries old Hungarian banner, a version of which was used by the Arrow Cross, a pro-Nazi party that briefly ruled Hungary toward the end of World War II. The party murdered thousands of Jews and deported hundreds of thousands more to Nazi death camps. Jewish groups, including the World Jewish Congress, have condemned the founding of the new "guard" and have called on the government in Budapest to act against it.

The Magyar Guard is closely associated with Jobbik (Movement for a Better Hungary). Although the party has no deputies in parliament it does have representatives on dozens of city councils across the country. Members of the party were involved in anti-government riots last year following the leak of a tape on which Gyurcsany admitted he had lied about the economy.

The failure of the biggest center-right party, Fidesz, to condemn the Hungarian Guard has led to charges that it tacitly supports the extreme-right. Meanwhile, the participation of former Defense Minister Lajos Fur in the ceremony was condemned by his former party, the center-right Hungarian Democratic Forum, which led the country's first post-communist government in the early 1990s.

German papers on Monday voice their concerns about the founding of the Hungarian Guard and the rise of anti-Semitism and neo-fascism in Eastern Europe.

"The founding of the Hungarian Guard is an alarming sign of sickness in a society, in which barriers to the glorification of violence, racism and intolerance are being torn down, and where there are increasing attempts to undermine the already weak institutions of democracy."

"The Hungarian Guard didnt just fall from the sky. It was founded by the far-right Jobbik  a party that governs in some regions together with Fidesz, the biggest opposition party. It is no coincidence that a Fidesz representative made a speech at the founding ceremony on Saturday, that the defense minister from the first free government swore an oath, and that flags from associations linked to the Catholic and protestant churches were flown."

"This is the nucleus of a racist paramilitary army. With its declaration that it will train its members to use weapons it is openly challenging the state's monopoly of force."

"The European Union shares some of the blame. It has to have been aware of the developments in Hungary. But it seems that the standards for the democracies in the former Socialist countries are different to those for Western member states. How else can one explain the fact that Franco Frattini, EU Commissioner for justice, freedom and security, criticizes stable democracies like Denmark, France and Germany for the supposed virulent racism there, but doesnt criticize the events in Hungary?"

"The fall of the communist regimes in Central and Eastern Europe left an ideological vacuum  A seething ideological mix came to the fore in many countries, made up of anti-Semitic and racist stereotypes, nationalist prejudices and elements such as militant anti-communism, revisionist ambitions and a vengeful fundamentalism."

"The founding of the Hungarian Guard  should be a warning to those who still believe that the danger from right-wing extremism is the invention of sensitive journalists, left-wing politicians and critical intellectuals. Hungary had a good image in the West even before 1990, which was in part due to skilful lobbying. That is why the Western public studiously overlooked the nationalist lapses under the Fidesz government of Viktor Orban just as it overlooks the dangerous spread of racism and anti-Semitism in Hungary."

"The fact that Fidesz is the only party in the democratic spectrum that has so far refused to distance itself from the Hungarian Guard is a cause for concern."

"The founding of the Hungarian Guard in Budapest is no isolated phenomenon in the new EU member states. Elsewhere in Eastern Europe new paramilitary and skinhead groups are constantly being formed. It would be a big mistake to dismiss these as neo-fascist marginal groups that can somehow be dealt with. In the background there is a broad social consensus acting as a mobilizing factor."

"After the end of the Cold War the post-communist society was suddenly confronted with the phenomenon that we call globalization. West European companies pushed into the East European market and contributed to the creation of a savage capitalism. The local and underdeveloped interest groups were unable to put up any resistance  At the same time the preparations for EU integration were pushed through  It is little wonder that many experienced globalization as an invasion or siege, and integration as dictates, colonization or at best the simple exchange of the East (Soviet Union) for the West (European Union). Many people now see themselves in the role of the victim."

"Much time has been wasted. Since the fall of the Berlin Wall a new generation has grown up that is not really democratically socialized  Most are captives of ethnically defined national and cultural concepts, feel their ethnic homogeny is being threatened and are now mobilizing for the battle to defend it."

"It is often said that democracy cannot be imported. The current need for harmony in the EU is preventing democratization and only benefits those who want to sweep the problems under the carpet."