German Foreign Minister Guido Westerwelle told parliament on Wednesday that the military deployment in Afghanistan was considered an "armed conflict within the parameters of international law." He said that "we have to call things by the proper name, we owe it to those who are exposing themselves to danger on the front lines."

The statement should allow German soldiers based in the country to act without fear of being prosecuted back home under the German penal code.

Defense Minister Karl-Theoder zu Guttenberg had already paved the way for a reassessment of Germany's unpopular Afghanistan mission, when he spoke of "war-like conditions" there after taking office. Officially, the German deployment had been termed a "stabilization mission," which left many soldiers resentful that the full dangers of their mission were not appreciated back home.

The legal gray-area in which the Bundeswehr has been operating was laid bare last September after a German-ordered air strike left 142 people dead, many of them Afghan civilians. It was unclear whether Col. Georg Klein, the officer who ordered the strike, was operating under international or German law.

Fittingly Westerwelle's statement came on the same day that Klein appeared before a parliamentary enquiry investigating the events. At the hearing he defended his actions as "appropriate."

Westerwelle's speech to parliament came the day after Chancellor Angela Merkel's cabinet approved a plan to send 850 additional soldiers to Afghanistan. Germany and its NATO allies had agreed to send more troops at a conference in London at the end of January. Before the extra German soldiers can be sent to Afghanistan, however, the German Bundestag, the parliament, must approve the new mandate.

On Thursday, German papers welcome the clarification of the legal position and most argue the move is long overdue.

"The government had carefully examined the content of the speech Foreign Minister Westerwelle gave to parliament to present the new Afghanistan mandate. It is now firmly of the view that the deployment of the Bundeswehr in Afghanistan is legally to be regarded as 'armed conflict within the parameters of international law.' The fact that the government is now presenting the situation in Afghanistan to the public in realistic terms is also long overdue. Defense Minister Guttenberg had made the first steps when he first took on the job by speaking about 'war-like circumstances.' And undoubtedly the air strike ordered by Col. Georg Klein in Kunduz, which is now the subject of a parliamentary enquiry, has contributed to the mission being seen in this new light. It remains to be seen what affect the new evaluation of the mandate by the government will have on the orders to the soldiers, as well as on their behavior and their legal responsibility. The case of Kunduz may also be affected retrospectively."

"The new legal evaluation of the conflict in Afghanistan is long overdue. It places the responsibility for the mission there where it belongs: with the politicians. Soldiers should not have to worry about the legitimacy of their actions, they should not have to weigh up which laws might be broken with every small decision. In the future international law will create the framework, not German law."

"That does not mean that soldiers can now shoot wildly in any direction. But the new legal framework gives the German soldiers protection, because the current circumstances in Afghanistan cannot be covered by the law governing policing in Germany. Anyone who has to warn an enemy fighter twice verbally and then give a warning shot is risking his life. The change to the legal situation will create more security."

"No one should believe that the new words are supposed to make things clearer. It was no coincidence that on Wednesday Georg Klein's lawyer declared that his client's decision to order the bombing of two tanker trucks was lawful. Note: This is an armed conflict, so one can bomb more quickly. The German government was therefore doing its bit to exonerate Col. Klein and the Bundeswehr."

"That seems to be badly needed. Because new details are constantly emerging that show that even before that fatal night of Sept. 4, shots were being fired quickly in northern Afghanistan -- and not only in self-defense. There is talk of 'death lists,' on which the Bundeswehr wrote the names of Taliban fighters they were searching for. And US Special Forces have long been based in the biggest German base at Mazar-e-Sharif, from which they launched their hunts for the Taliban."

"Soon 5,000 new US soldiers will double the NATO presence in northern Afghanistan and the US will take over military control there. ... The rhetoric of 'armed conflict' is to prepare the German public for the new US strategy of fighting the insurgents. In this light, the air strike in Kunduz will soon just be seen as a preliminary skirmish -- before the US gets serious in the north." 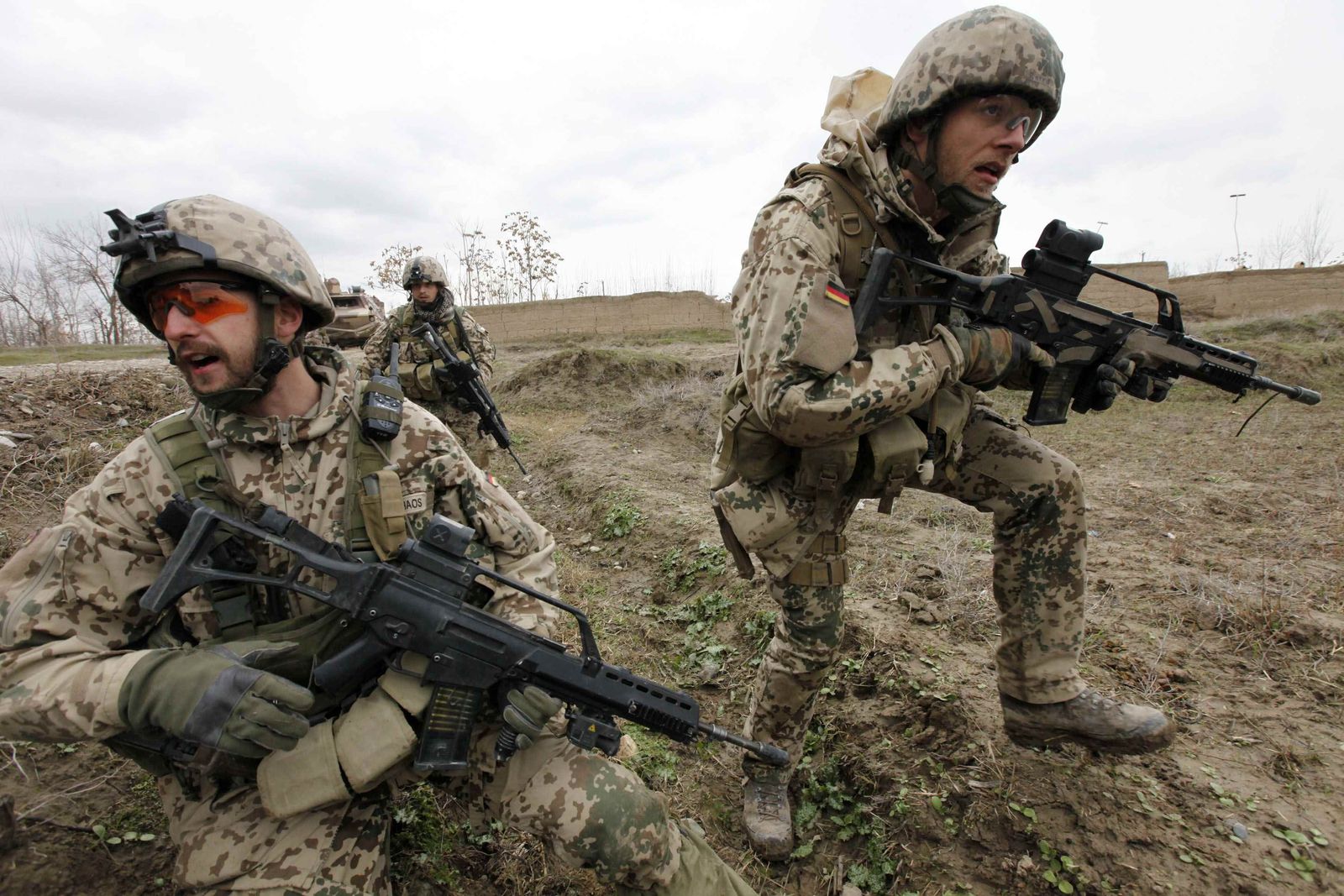 German Bundeswehr army soldiers during a firefight with insurgents near Kunduz.