Germany continued to defy the global downturn in 2011, with one glowing economic report after the other, even as other countries in the euro-zone fell into recession and economies around the world struggled to find their footing. On Wednesday, the country's Statistical Office announced that exports for the past year reached €1 trillion, representing 11.4 percent growth over 2010 and becoming the greatest amount in history. Some have even speculated that the crisis has benefited the German economy.

The largest growth was achieved in countries outside the common currency zone, which has been saddled with the debt crisis and stalled or shrinking growth. In non-euro-zone countries, exports increased by 13.2 percent, with deliveries within the currency bloc rising by 8.6 percent.

In emerging economies like China, Russia, India and Brazil, demand for the "Made in Germany" label is greater than ever before. They purchase German cars, power plants, heavy machinery and large quantities of high quality, highly specialized products that make the economy here buzz. Those exports helped the number of unemployed in Germany to drop to 3 million, the lowest level seen in 20 years.

As these countries' economies continue to grow, they are increasing exports and also building up their own infrastructures -- and are relying on German products as they do so. They often turn to German small- and mid-sized business for their technology and know-how.

German imports also increased to a record level, rising by 13.2 percent to more than €900 billion.

Although the news appears to be positive at first, Germany also chalked up a record trade imbalance in 2011, with a trade surplus of more than €100 billion. Politicians in the United States and France have urged Germany to do more to address its trade imbalance. Many believe that economic inequality around the world caused by trade imbalances was one of the major causes of the 2009 global economic crisis. A number of countries are calling on Germany to either curb its exports or to reach a balance by importing more from abroad.

Berlin has refused to stymie exports because it feels that would unfairly punish a country for its own success. But critics argue that, with its trade surplus, Germany is actually exacerbating economic imbalances within the euro zone, particularly given that exports account for almost half of Germany's gross domestic product.

Painful social system reforms and lower wage costs have kept Germany more competitive than other euro-zone countries in recent years. In 2010, when she was still France's finance minister, Christine Lagarde urged Germany to boost its domestic consumption and to raise worker pay in order to prevent further divergence within the euro zone. Some fear the recent data might lead similar sentiments to resurface.

Still, with the first concrete signs that the boom is slowing, such criticism may be shortlived. Following the record-setting results of the first 11 months, exports dropped sharply, by 4.3 percent, in December. The last time exports experienced a drop that big was in January 2009, at the peak of the economic crisis. Imports also fell by 3.9 percent in the final month of 2011.

Over the course of the next year, many observers are expecting German exports to shrink. The German Chambers of Commerce and Industry (DIHK) estimate that economic growth in the country will reduce by half in 2012. Some fear the country may also be sliding back into a recession.

The greatest burden for the economy are the other euro-zone countries, to which 40 percent of all German exports are sent. In December, euro-zone orders from Germany fell by close to 7 percent.

Editorialists at major German newspapers on Thursday take a critical look at the country's trade imbalance, with some arguing Germany should ignore the issue and others arguing the country should take greater steps to eliminate it.

"Some reactions make it sound as if the new record is come kind of disgrace, a coincidence or, worse yet, illegally misappropriated und comparable to high performance in sports achieved through doping. In this instance, the forbidden stimulants are comparably low labor costs. Thanks to wage restraint over the years, Germany is now able to produce more cheaply than its neighbors and, by doing so, pushes its products into their markets."

"But that wage restraint, efforts to make the labor market more flexible and the loosening of part-time and temporary work was not some kind of game. It was a reaction to the major German crisis that unfolded during the first years after the introduction of the euro, when money from investors flowed into other countries -- ones that short-sightedly racked up massive amounts of debt. Germany, in contrast, had to fight mass unemployment and was ridiculed as the 'sick man of Europe.' A massive effort that required major sacrifices and is politically known as 'Agenda 2010,' turned the economy around. The success was hard fought and a bitter price had to be paid. To relinquish it would be foolish."

"It is true that the imbalances have become so great that they could lead to dangerous economic distortion, particularly within the economic and currency zone that is bound together. Out of solidarity and their own interests, the Germans should take countermeasures here -- and also take a leading role. But not in a way in which it weakens itself through excessive wage increases, tax hikes or social contributions that could stifle the economy. Rather, it should help others to create more competitive structures through reasonably financed budgets, functioning institutions and making those countries more attractive to investors. "

"It also holds true that if others are strengthened … Germany could also be weakened. But that would be the result of fruitful open competition whose outcome would be open, and not the consequence of wilful self-mutilation that will help no one."

"Whereas other major exporting nations like China are now actually starting to eliminate their surpluses in order to reduce imbalances in global trade, Germany has not succeeded in doing so. The country's balance of foreign trade in 2011 ended with a surplus of €158.1 billion, €3.2 billion greater than the previous year. Great, some say, we still have more exports than imports. That just shows how competitive the German economy is. A lot of money is also being earned."

"But there is just one, let's say, 'challenge': Someone abroad has to pay for these German exports. And, incidentally, the majority of those exports go to European countries. Many of these importing countries have large current account deficits, meaning they import more goods and services than they export. They are also suffering from the debt crisis. So at the same time products are being exported to these countries, capital needs to be as well, through loans, for example.

"In the past, that often led to speculative bubbles. And now many economists are warning that lasting imbalances in global trade can worsen a crisis and quite possibly even cause one."

"Some people are unperturbed by it, especially in Germany, and they refuse to see the dark side of the export record. Instead they are calling for countries with current account deficits to whip their economies into shape and become more competitive, especially in southern Europe. They make that demand without recognizing that export nations also have a responsibility to help ensure the stability of the global economy -- by spurring domestic demand, for example."

"News about Germany's strong position on the global markets isn't always welcome everywhere. A year and a half ago, a French economics minister, who today leads the International Monetary Fund, complained about a German export surplus she said was too large. She said it had become a burden on other countries and that there were dangerous imbalances. In the meantime, such talk has been hushed. But it is also mythical to say that the German economy lives from exports alone. Domestic demand contributed more to last year's upswing than demand abroad. Investments and private consumption were the drivers of growth of around 3 percent."

"The export surplus stagnated … because imports grew faster than exports. The reason for this is not just the higher price of oil and natural gas, either. Because of the strengthened economy, Germans have been able to afford more goods from abroad. The economies of Germany's European neighbors not only profit from this -- they also desperately need it. By now, the debt crisis is overshadowing the global economy and global trade weakened noticeably at year's end. It will be a struggle for German exporter's to preserve the place in the sun they have enjoyed until now." 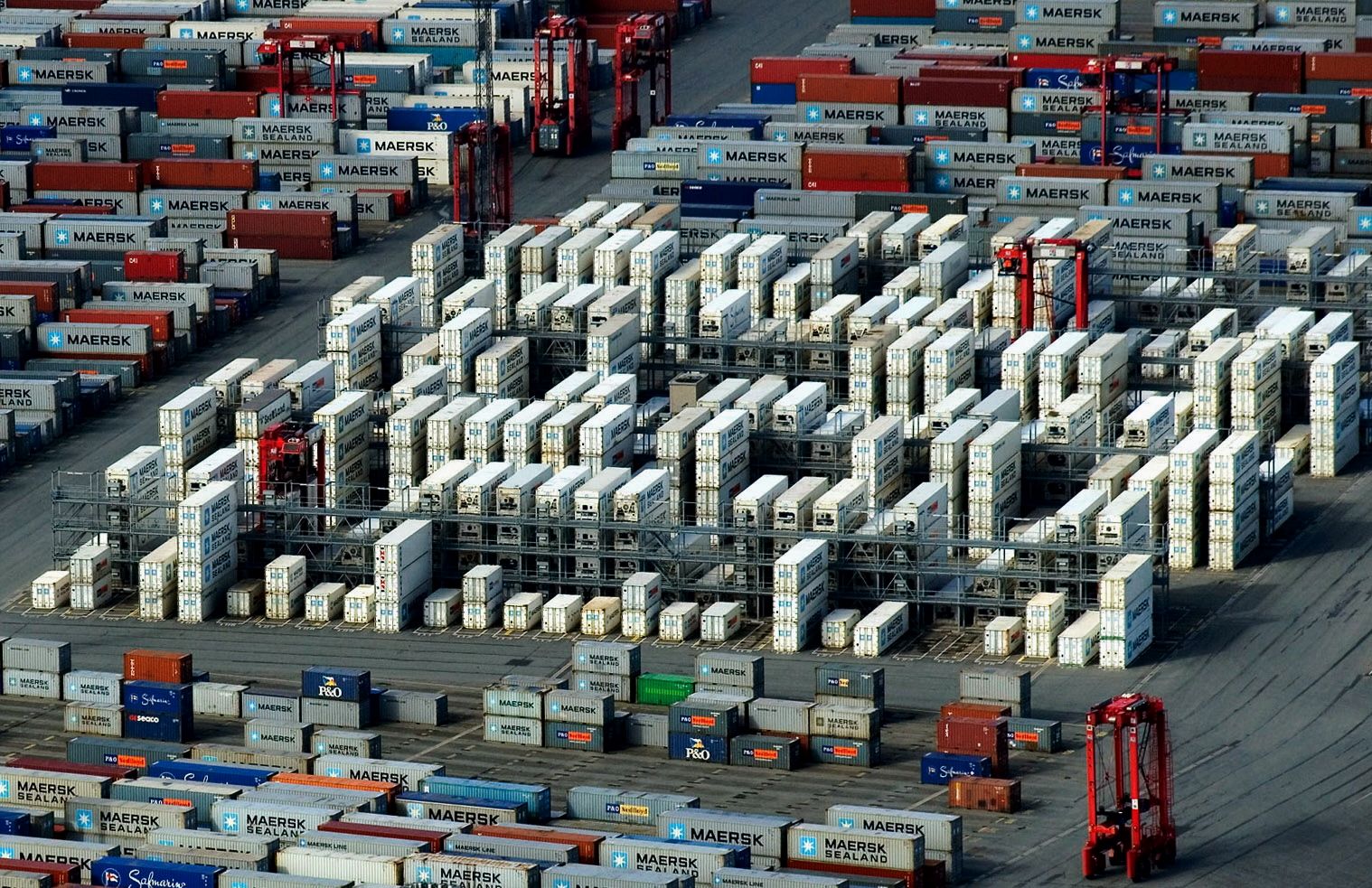