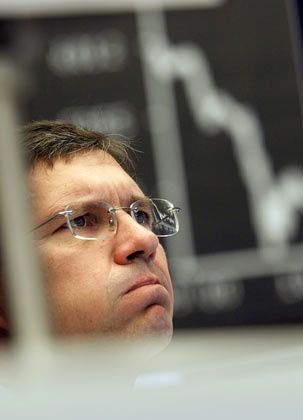 A trader in Frankfurt watches anxiously as the effects of a government rescue plan of Hypo Real Estate affects the German market.

Last Thursday, German Finance Minister Peer Steinbrück stood before the German parliament and tried to assure its members that "The United States is the source of the crisis, and it is the focus of the crisis." Four days later, Steinbrück launched the largest financial rescue action in postwar Germany, offering €26.6 billion ($38.3 billion) of a combined €35 billion line of credit to bailout Hypo Real Estate (HRE), the country's second-largest commercial property lender, which had considerable business in the US real estate market.

For Germans and Europeans, the crisis has arrived. On Sunday, the governments of Belgium, the Netherlands and Luxembourg took partial control of struggling Benelux bank Fortis. On Monday, Britain seized control of mortgage lender Bradford & Bingley, and Iceland's government took over Glitnir, the country's third-largest bank.

The flurry of bailouts led to sharp drops for European shares on Monday, and banks held their money tight -- rather than lending it to other banks -- as they waited to see whether the US Congress would pass its $700 billion bailout package.

In the end, the House defeated the bill by a vote of 228-205. The timing of the defeat left time for only one major German newspaper, the Handelsblatt, to respond to the measure's failure in their morning editions. Most other commentator's were focused on Monday's HRE bailout. Most of them approved of it, while calling for more government action -- and nervously hoping for the best.

"The failure is the consequence of misjudgments and technical mistakes. From the very beginning, the emergency package was given the wrong label. Calling it a 'rescue of Wall Street' produced a counter-reaction across the country that flooded from the constituencies all the way to the House of Representatives. It was in their offices that the anger of the enraged citizens was unloaded. Those citizens did not intend to see the use of taxpayer money to pull those people out of the mire who had been stuffing their pockets for years ..."

"It was also wrong to put the representatives under such time pressure, despite the fact that it was such a pressing issue.  It left the impression among citizens that (US Treasury Secretary) Hank Paulson was de facto being given a blank check for an unbelievable amount of money."

"Another thing went underappreciated: 24 hours earlier, no one would have presumed that the authority of President Bush had reached such a low level that he would not be able to win the support of even half of the Republican representatives. But, in reality, members of Congress are already living in a post-Bush era.  Why should any of them risk their head for a president who will already be history in a couple months?"

"And the failure makes one more thing clear: It shows that, after eight years in government, the Republican Party is looking for a new direction. It practically doesn't want anything to do with George W. Bush anymore, and it is having a real hard time mustering the energy it needs to get behind its leading candidate, John McCain. Unity is fragile and is fundamentally brought about by the necessity of presenting a unified face to the voters in five weeks. But, in reality, the conservative party in the US has a lot of work cut out for it -- regardless whether it wins the election or not."

"It's only been a week since Peer Steinbrück said that German banks were stabile when compared with their US competitors. Sunday evening, the finance minister supplied some proof that that was not the case"

"In this kind of situation, the government can no longer have trust in the system of deposit guarantees. These weren't created for a crisis in the system. The government has to get much more involved now. It -- and it alone -- can reestablish trust in the market. However, it should be careful to not make taxpayers bear the costs for rescuing stockholders and the industry"

"Even if collapse has been averted (in the case of HRE), the government and the central bank should prepare themselves for the worst. The chances for avoiding a market collapse are much greater when investors and depositors are certain that there is an emergency plan. The time is coming for the chancellor to show some leadership and to strengthen trust in the government. On the other hand, the crisis management up to now has left room for doubt that Berlin has really taken the issue seriously."

"Since (HRE) is not the only corporation that has fallen into difficulties, the federal government needs to make sure that the industry is playing a bigger role itself in the rescue operation. The financial houses are only bearing a quarter of the €35 billion bailout funds, and some of them were urging the government to nationalize HRE. In doing so, what you see is an industry that was happy to rake in the money during boom times passing on the costs of the crisis to the citizenry. The government needs to push the financial industry into starting up a new rescue fund. Otherwise it won't be able to justify to its citizens why it leapt in so generously."

"There's no use asking the question any more about whether Europe will participate in the plan to rescue Wall Street. That's because Europe now has to save its own financial system from collapse"

"(After the HRE scare), depositors will now ask themselves whether their own banks are safe. From the point of view of the banks, this question should never be asked. In the end, a bank's capital lies in its good reputation, its reliability and its trustworthiness. For already 15 months now, banks haven't been trusting each other, and they don't want to loan each other money overnight anymore. Why should customers be asked to have faith when the banks don't even have it themselves anymore? Despite the fact that the central banks are supplying the banks with cheap money, the trust still hasn't returned. That is what makes this crisis so dangerous. Money and credit are like the bloodstream of the national economy, and banks serve as the pumps. Trust in banks should not be allowed to be lost because no one knows how to win it back. It's only right that hardly anyone is enthusiastic about rescuing the credit institutions on the public dime. But what's the other option? Surely not a rush on the banks."

"Now the Germans have no more cause for feeling schadenfreude. The crisis is not confined to the United States -- it is hitting Europe with full force.  (In the case of HRE), the good news is the bad news. Of course, it's correct that the problems at HRE did not result from bad investments in the classical sense but, rather, from the panicky mistrust that has seized the money and credit markets worldwide."

"For this reason, the (government's) intervention was absolutely correct, and it is also extremely unlikely that the taxpayers will ever be asked to pay for the full amount of bailout funds for HRE."

"But as long as the crisis of confidence continues to rattle the financial world, the threat of the next billion-euro drama happening at any time will remain. It's no longer sufficient to hectically throw up some scaffolding on a case to case basis. European politicians need to follow the American model and look for a systematic solution as well."

"With so many unclear prospects, it's really worth it to think about things on a more fundamental level. When the state has already been forced to take all possible firms under its arms and, in doing so, to boost taxpayer debt, it is absolutely necessary to have a debate about the direction that future developments should take. Are these daily rescue actions really worth it? Is the goal really to continue on with 'more of the same' -- until we reach the next speculation bubble? Or must a new trust be created -- perhaps by creating a more sustainable path of economic development along with the needed infrastructure?"