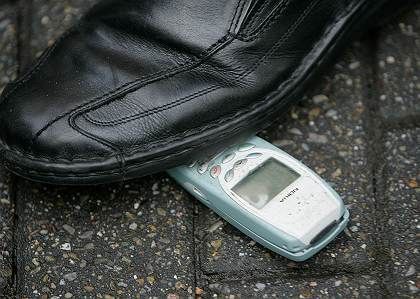 One Nokia employee in Bochum shows what he thinks of the company.

A crying woman holds out a Nokia mobile phone, a protest banner in her other hand. The image, which dominates the front cover of Thursday's Süddeutsche Zeitung and other German newspapers, symbolizes the wave of grief and indignation sparked in the western German city of Bochum by the news that Nokia is to close its plant in the city.

The Finnish cell phone manufacturer unexpectedly announced Tuesday that it would close its plant in Bochum in the western state of North Rhine-Westphalia by the middle of the year, with the loss of around 2,300 jobs. A further 2,000 jobs at the plant's suppliers are also in danger. The company is moving production to a new plant in Cluj-Napoca, Romania, where wage costs are a fraction of those in Germany, with other functions going to Hungary and Finland. Hundreds of employees demonstrated outside the Bochum plant Wednesday in protest against the closure.

As anger over the news continues in the city and beyond, the company is now being accused of misusing state subsidies. The mass circulation newspaper Bild reported in its Thursday edition that there is speculation that the Romanian government lured Nokia with the help of subsidies from the European Regional Development Fund.

European Commission President José Manuel Barroso rejected the speculation, saying that there had been no help from Brussels for the move to Romania. "If it is possible to move jobs from Finland to Germany, then it must also be possible to move from Germany to Romania," he said. The German Deputy Economics Minister Hartmut Schauerte also told Reuters that EU money had not been used to support the relocation. However a spokeswoman for Nokia told Bild that the firm could have indirectly received subsidies in Romania in the form of financial help for building roads to the factory, for example.

The economics minister of North Rhine-Westphalia, Christa Thoben, is checking to see if Nokia will have to pay back €17 million ($25 million) in subsidies it received from the state. Nokia had received a total of around €88 million in subsidies in Germany, from the federal government and North Rhine-Westphalia. According to Thoben, Nokia had assured her it would guarantee 2,856 jobs in Bochum in the long term. However only 2,300 people are working in the plant at the moment. Observers point out, however, that the deadline for the job guarantee expired in September 2006.

Politicians from both sides of the political spectrum have condemned the decision, with critics pointing out that the plant never operated at a loss. The governor of North Rhine-Westphalia, Jürgen Rüttgers, publicly embraced weeping protestors Wednesday and called on the company to reverse its decision, accusing the Finnish firm of being a "subsidy locust." The term "locust" is used in Germany as a negative shorthand for unwelcome profit-hungry foreign investors such as hedge funds. Rüttgers, who belongs to Angela Merkel's center-right Christian Democrats, is known for his populist protectionist take on globalization, having famously coined the phrase "Kinder statt Inder" ("children instead of Indians") in 2000 to argue for promoting education instead of immigration as a solution to the country's shortage of computer specialists.

Despite the outspoken criticism, the company said Thursday it would not reconsider the decision to close the plant.

Nokia is the latest in a series of cell phone manufacturers to move production from Germany. One year ago, BenQ closed its German plant, while Motorola announced six months ago it would leave Germany. The manufacturers are reacting to increasing competition in the handset market which is putting pressure on prices and causing firms to look to cut costs.

Commentators writing in Germany's main newspapers Thursday all agree that mobile phone manufacturing has no future in high-wage Germany and on the whole defend the company's move.

"It is unlikely that production at the Nokia plant in Bochum could have been maintained at an acceptable cost. As early as 2006, the bankruptcy of BenQ demonstrated that Germany is no longer really a suitable location for the production of mobile phones."

"Playing the protectionist card and demanding more subsidies for German companies causes more harm than good. In the end, it would cause more cases of companies going bankrupt despite state support, and the required renewal of the economy would be hindered. The result would be fewer jobs -- even if the downsizing would not be as dramatic as in the Nokia case."

"People can and will examine whether Nokia has a legal obligation to repay its subsidies. But it seems at first sight that they will not need to, assuming that the deadlines agreed (for guaranteeing jobs) had already passed.  Nevertheless, Nokia would be well advised to make a gesture of good will. The amount involved is €88 million, a relatively modest sum for the global company, and something of much higher value is at stake, namely its good reputation."

"How should Nokia behave? A company, especially one whose board acts responsibly toward its shareholders, must produce wherever costs are competitive and it makes strategic sense. Before Nokia, its competitors BenQ and Motorola also had to unfortunately choose to act to the detriment of their German plants. They will come back to Germany when they feel it makes sense. Because even on days when there is such bad news, it must not be overlooked that German companies are doing well against their international competitors -- in the industrial machinery sector, for example, companies' products are selling like hot cakes despite the strong euro. When in Germany enough ideas flow into a product that it can only be manufactured here, then wage costs are not a big problem -- and subsidies are unnecessary."

In an editorial entitled "Why Nokia Is Doing the Right Thing," the Financial Times Deutschland writes:

"It is naked polemic to imply that the mobile phone manufacturers are misusing subsidies, as Jürgen Rüttgers is doing. If he really wanted to help, he would invest more money in education and research. Only that has a future in Germany. Nokia cannot be accused of doing anything wrong. The management decided to act before problems arose or could no longer be dealt with. This approach is clearly something which is hard to convey to the German soul."

"From the perspective of German politicians, the matter is simple: There are good subsidies and there are bad subsidies. Good subsidies ensure that companies locate in Germany, even though jobs are lost elsewhere.  But if the EU's funding policies, which all member states agreed on together, make Romania more attractive as a location with the help of, say, an industrial park, the same politicians can become quite toxic. They then like to remind everyone that Germany is the largest contributor to the EU budget, and thus indirectly pays for the destruction of German jobs."

"Should the EU therefore abandon its aim of bringing into line the standard of living in all states? The consequence would be that the wages and working conditions in Romania would remain miserable in the long term. That would be fatal for the whole of the EU -- not only from a moral, but also from a social perspective. Because in a single market, companies always prefer to go where the lowest wages are paid and the operating costs are especially low."