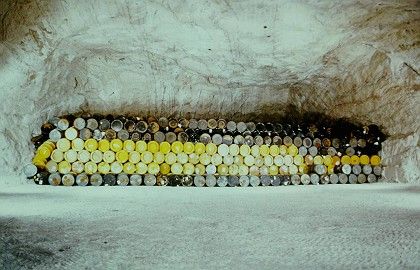 Barrels of radioactive waste in the former salt mine have leaked and threaten groundwater in Lower Saxony.

It's not enough that 130,000 barrels of radioactive waste are sitting rusted and leaking in a converted Lower Saxony salt mine. But it turns out that the severity of the problem, which this week has developed into a full-blown scandal, has long been known -- and was overlooked by state environment ministers. As early as 2006, researchers mentioned "radioactive liquor" in a report on the Asse II salt mine to state officials, according to a regional newspaper called the Neue Osnabrücker Zeitung.

The sorry condition of the storage site has become a political scandal in Berlin, where a shake-up in responsibility for the nuclear waste among federal ministers was announced on Thursday. Germany's Social Democratic environment minister, Sigmar Gabriel, has turned the leaching radioactive barrels into a personal crusade -- although he comes from Lower Saxony, and as its former environment minister he might have been expected to keep track of problems at the mine.

But on Thursday Gabriel and a rival minister, Dr. Annette Schavan, a Christian Democrat, announced a sudden re-arrangement. From now on the Federal Office for Radiation Protection, under Gabriel's Environment Ministry, would look after the mine, instead of the now-dissolved Helmholtz Center for Health and Environment -- which stood under Schavan's Federal Ministry of Education and Research. The public drama posed Gabriel in the politically convenient role of a hero, taking over from Schavan, although implications of negligence by the Helmholtz Center were denied by Schavan herself.

Newspaper commentators are still absorbing the federal shake-up on Friday morning, and trying to guess what it all means for the (highly politicized) future of German nuclear power.

"Although groundwater leaks in this storage facility for low- to mid-level radioactive waste have been known since the 1960s (when it opened), along with other leaching problems over the past 20 years, and although researchers have consistently given warnings, the government has hardly bothered with the problem. Now, at long last, there are political consequences."

"For one thing, the Asse-II pit will be declared a 'final' storage facility (instead of an 'experimental' one). So it's proper that political responsibility should shift from the Ministry of Education and Research to the Environment Ministry. But the actual problem still isn't solved: What should become of Asse-II? It's more than unpleasant to hear that radioactive liquor is slopping around in the old salt catacombs -- which will cause no-one-can-say-how-much damage in the coming decades and centuries."

"Naturally the case of Asse-II will remind the public that the problem of 'final storage' has not yet been solved. Proponents of nuclear power will need to answer this challenge. So far there is no final plan to dispose of highly radioactive waste -- meaning spent fuel rods from nuclear power plants. Now as ever they are stored, still 'provisionally,' on the premises of the plants themselves."

"It's good that responsibility and control of a final storage facility -- which Asse-II always was -- has shifted away from the science and research side. The experts at the Helmholtz Center may have known what they were doing 8,000 meters under the ground, but the urgency to make it all transparent -- precisely because a population so sensitive to nuclear power issues lived overhead -- escaped them."

"The real question is whether Sigmar Gabriel has overestimated the PR-potential of Asse-II for himself. Already some officials in the Lower Saxony region of Wolfenbüttel -- where the mine is located, and where Gabriel himself has his constituency -- resent the fact that he has dramatized this scandal. When he talks in the language of disaster he is playing, in these officials' minds, with the fears of the German population, in order to pose as a savior."

"Such a rash agreement between two nuclear experts (Gabriel and Schavan), who also happen to be ministers from rival political parties, one of whom belongs to Chancellor Merkel's party and even sits in for her as chairwoman of the Christian Democrats, cannot pass without comment. That Dr. Schavan has hardly resisted Gabriel's confiscation of the high ground in this controversy can be interpreted in exactly one way: The situation at Asse-II is impossible to justify in public. Therefore the Christian Democrats have let Gabriel win the public squabble, hoping he'll stop his I-told-you-so bossiness  Whether the Christian Democrats will win back the leeway to continue their argument in favor of nuclear power, though, is still an open question."